my home
Our “Play Room” Before & Afters (Whitewashed Floors DIY)

I almost named this post “the worst floors ever” because the red mosaic tile floors in our play room/casual living room pretty much were the worst floors ever. I mean, I guess it could always be worse, but the grout was visibly dirty and the tiles were rusty brick red, which clashed with everything. 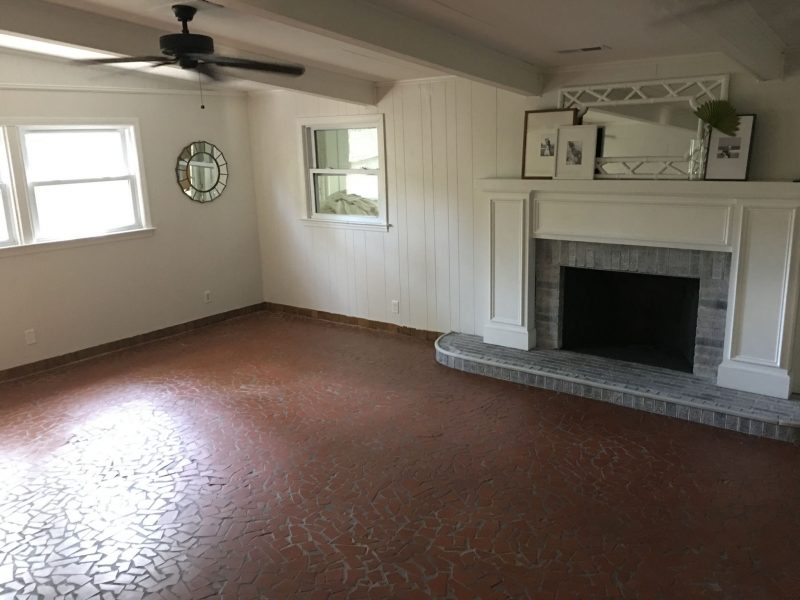 See I told you they were bad. Still, they were a lot better at that point than when we moved in.

Speaking of, let’s take a short walk down memory lane. Remember this post from the day we moved in or this one? I’m talking about before we painted the paneling, the ceiling, the beams, and the fireplace. I give you the original before pictures: 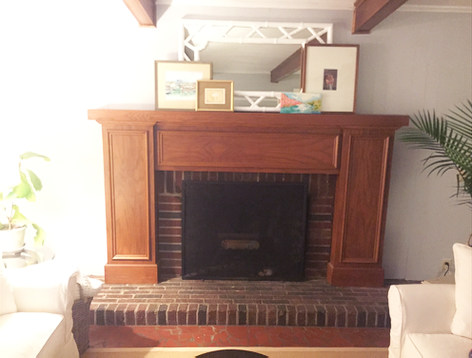 We painted the fireplace white, the walls our favorite white-gray, the ceiling and beams white, and whitewashed the brick around the fireplace. All of that really freshened the space, but it took a year and a few months before we finally got to a point where we knew what we wanted to do with the floors. I can’t believe we went this long, but there were a lot of other things to address first. At one point, we thought carpet would be the way to go. When Watson started crawling, I really wanted a room with soft carpet so that it would be a comfortable play place. But, this room also has a door to a porch, which leads to the yard, so carpet in a high-traffic area like that wouldn’t have been our smartest move.

We ultimately decided on glueing an unfinished engineered hardwood floor on top of the tile at the recommendation of our flooring guy. We used Signature Hardwoods and I’m telling y’all this because if you’re in Charleston, this is the company to use for anything flooring related. After a year of being in our home with contractors out the wazoo coming to perform work, this was the first time we had a 100% happy experience from start to finish with no hiccups (although I have a great fence guy too if anyone is interested!). Everything was seamless and Grant, the owner, went above and beyond to make sure we got the project done well and on a very tight schedule.

Why the tight schedule? So, Watson’s birthday party was coming up the next weekend and it hit me that I really wanted these floors done in time for it. I called Grant, he came to the house the same day to look everything over, and then he managed to get the hardwoods on the truck from the manufacturer that same afternoon. He knew I was in a hurry, so he squeezed our installation in for early the next week, which went super quickly.

Here it is, all installed but unfinished! (So, it’s just raw wood with no stain or anything on top.) 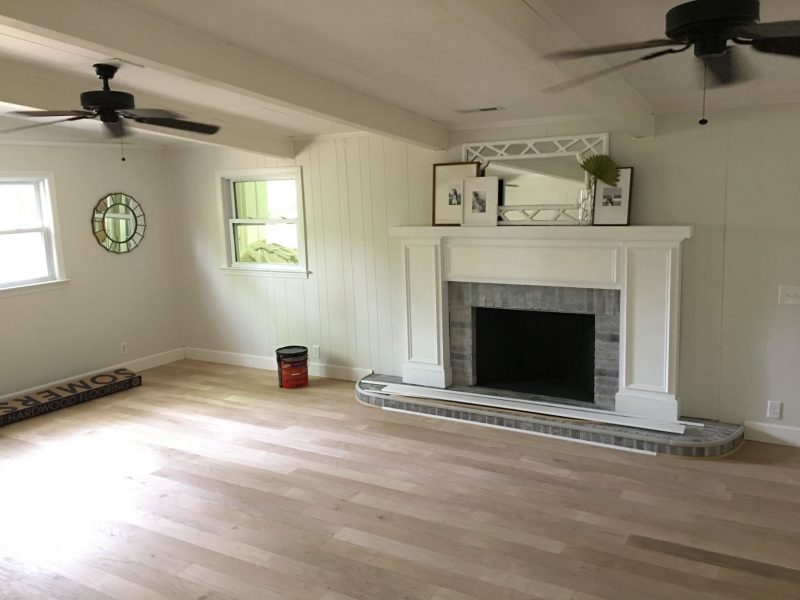 Ultimately, my plan was to paint the floors white. But once I saw how beautiful our new wood floors were, I honestly couldn’t bear to paint over the wood grain. So, we cut the paint 50/50 with water and whitewashed them instead. We used Sherwin Williams Porch and Floor Enamel in a white shade. We chose to take this part of the project on ourselves. If I could do this over, I would have left it to the professionals, for sure. Whitewashing was a lot harder than I expected! This room is over 400 square feet, which is a pretty big space and makes for a lot of time on your knees on a hard floor. (My legs were killing me when it was all said and done!)

It’s dark outside in the photo below, so you can really see the difference between the natural floors and where we started whitewashing it. Honestly, I would have been happy putting a clear poly coating on the natural floors because the color of the wood itself was so gorgeous! But it was too similar to the wood floors throughout the rest of our house and I wanted this room to be noticeably different. 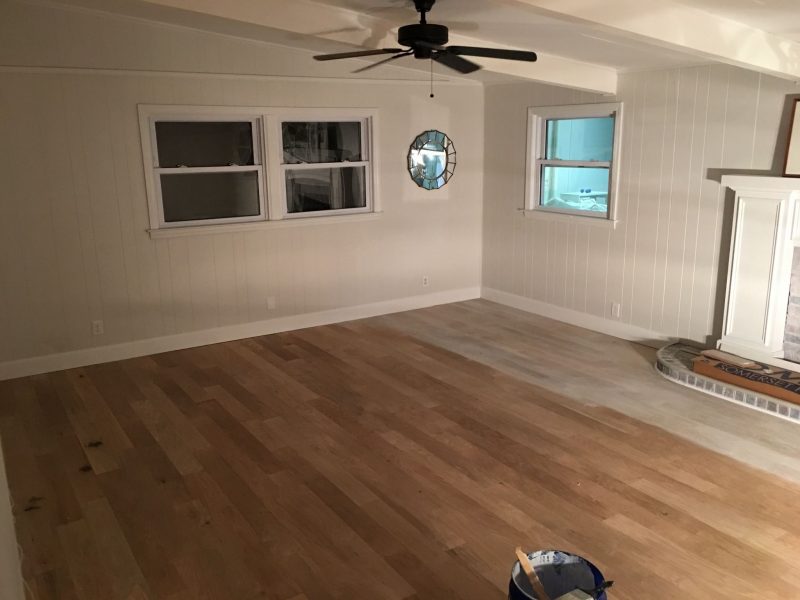 It took a few runs to figure out our process. We started out with Brandon in one area and me in the other, each with our own paint brush and rag… painting the whitewash on, then wiping it off with a rag. But after a while, we realized that it wasn’t looking consistent. I was applying more whitewash than Brandon was and he was wiping his harder than I was. Here’s what worked: We worked together in the same space, one board at a time. (This is very important because of the way the whitewash dries… you can’t overlap the wash. So doing one board at a time keeps the look very consistent. Trust me!) Brandon put the paint on and I wiped it off/rubbed it in. Then, we would move on to the next board. It sounds easy and it is! It’s just tedious, especially in a big room. I think we worked for a total of 14-16 hours on it between two nights of work, so we ended up staying up until 5am two nights in a row. Not fun! 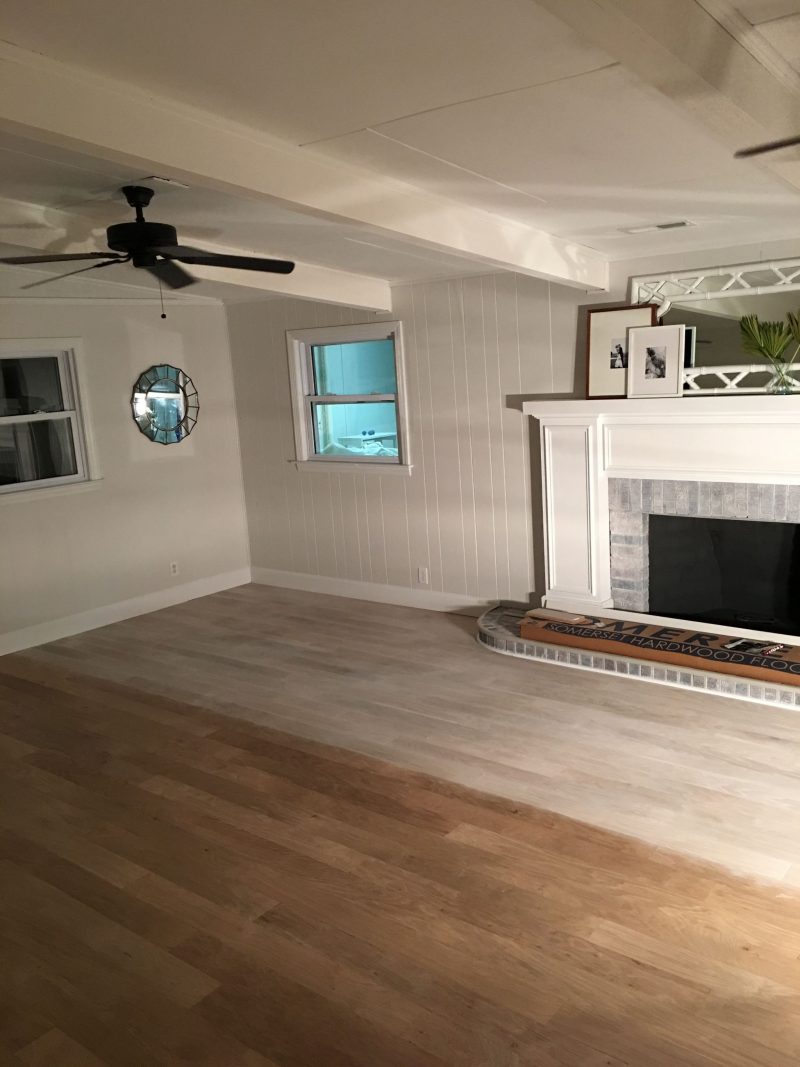 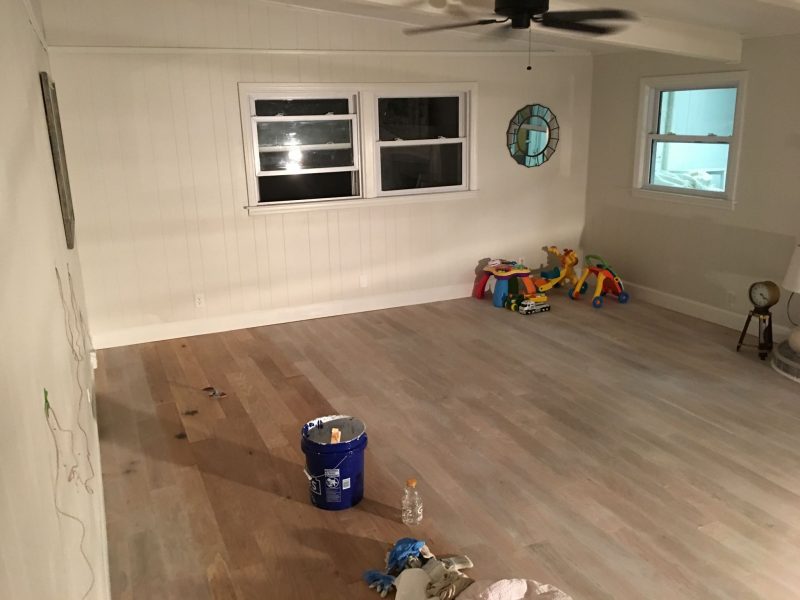 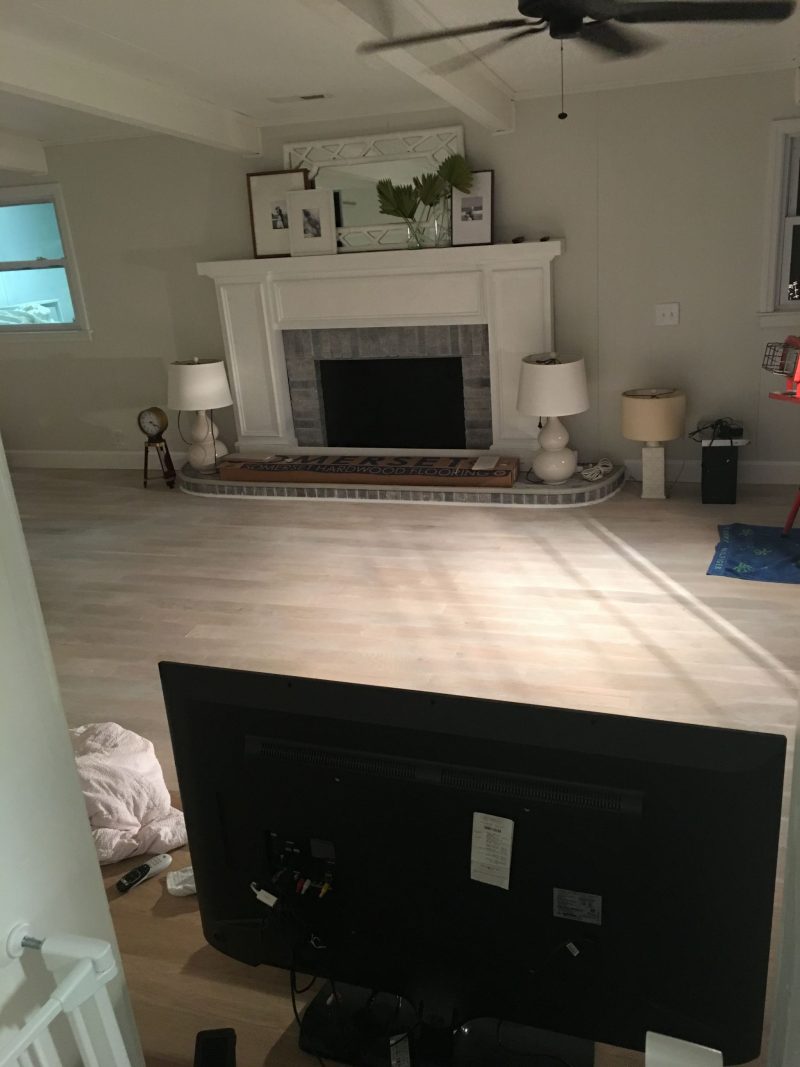 The type of paint we used does not require any type of polyurethane top coat, so after we got the whitewash on there, that was it! With that said, it does have a very “unfinished” feel to it. In other words, if something spilled on it, I doubt it would bead up in the same way that it would on a urethane-coated floor. So if that’s important to you, I would use a water-based top coat (oil-based will cause yellowing) even though it’s not required with this specific paint. We haven’t had any issues at all with being able to wipe dirt and spills right up.

Before I share the final after, how about one last look at the red floors? I know you want to see them again. 🙂 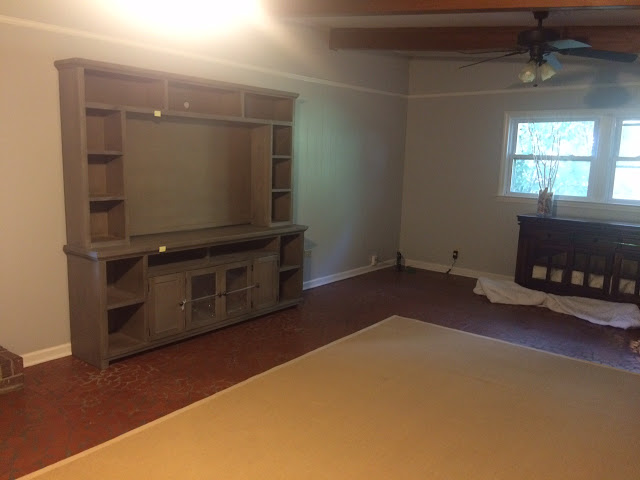 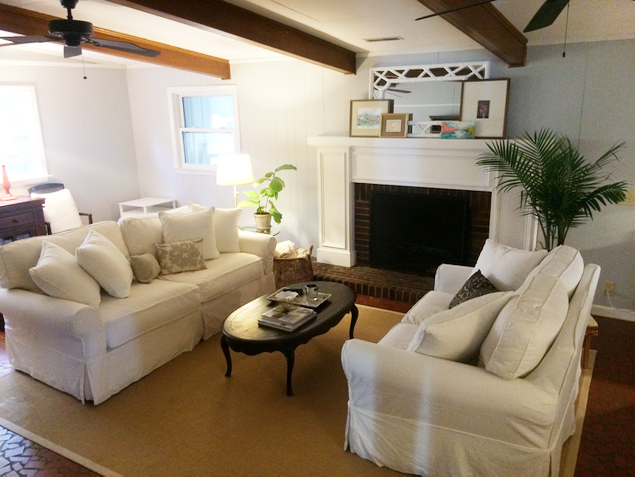 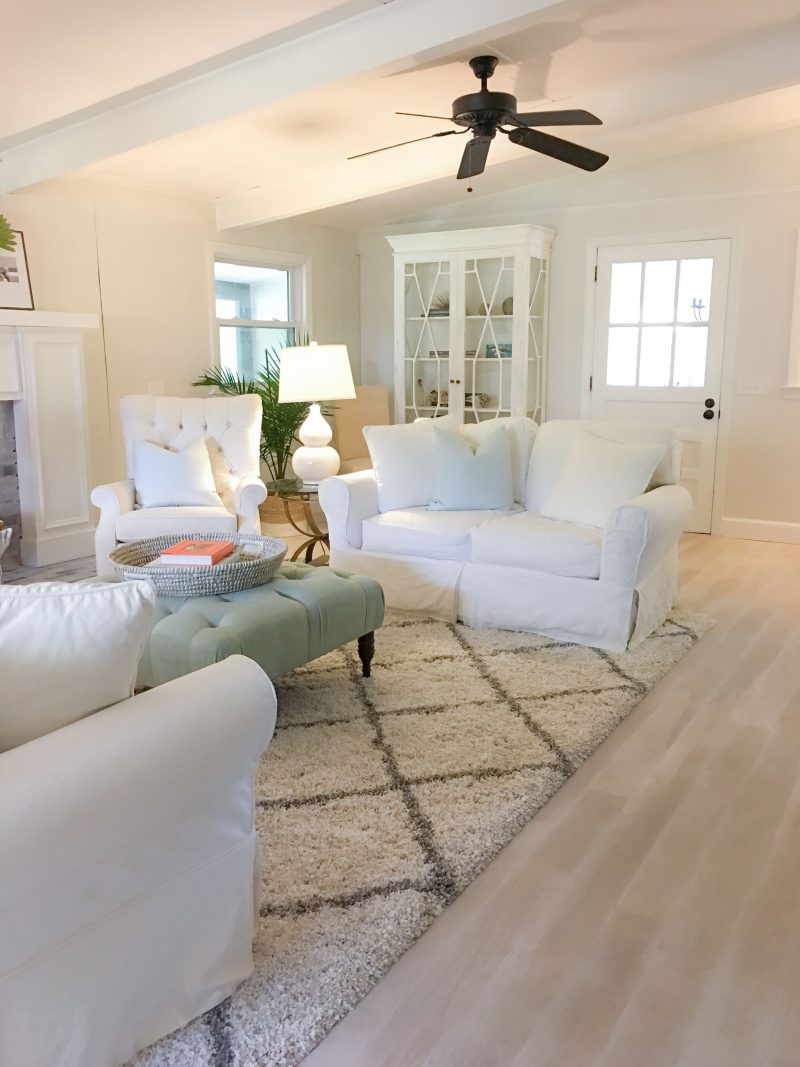 This white glass cabinet is from Celadon and I’m so obsessed with it. Had my eye on a larger version they had in store, but then I saw this one that was half the size and half the price. Scooped it up right away without knowing where I was going to put it. Turns out, it looks like it was made to go in this room! 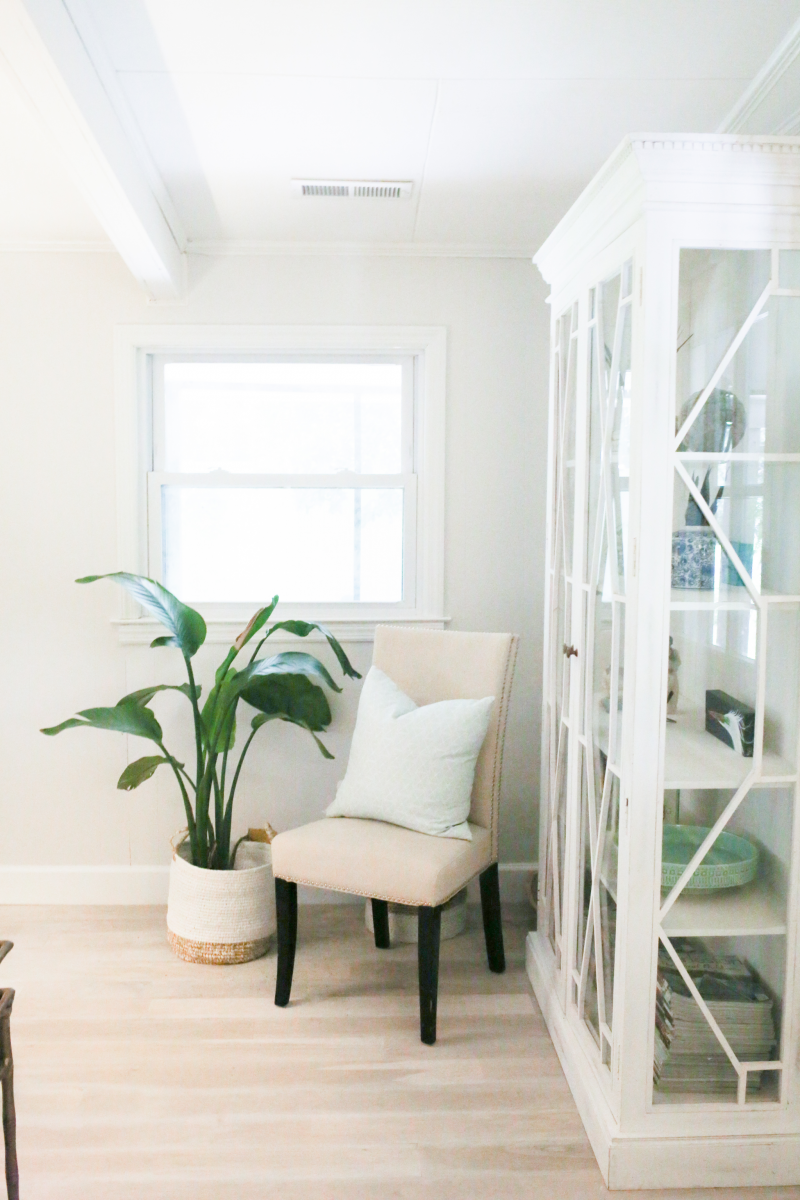 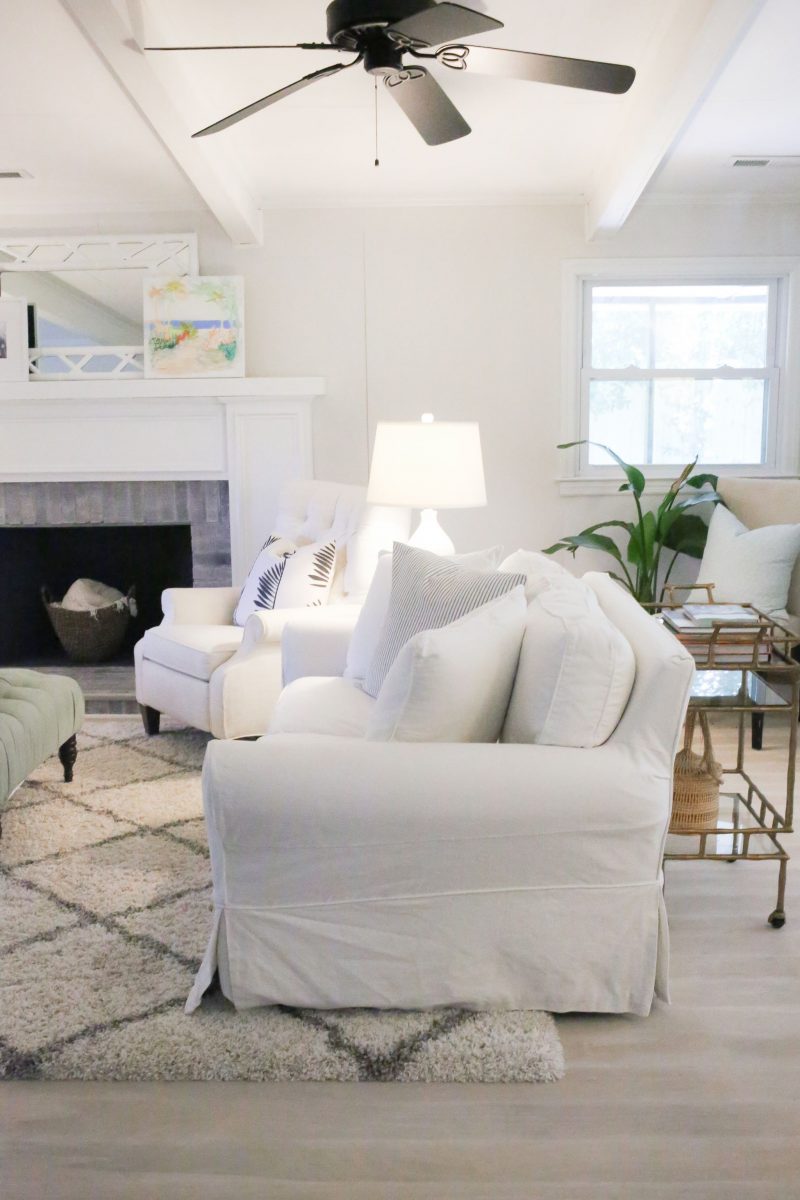 Our rug is by Safavieh. I am bummed that it’s not going to work in our new house because I just bought it not long ago! It’s the softest, most comfortable rug I’ve ever felt. Charleston friends: It’s going to be in our yard sale that we have this Saturday! So is this ottoman table that I bought at the same time. 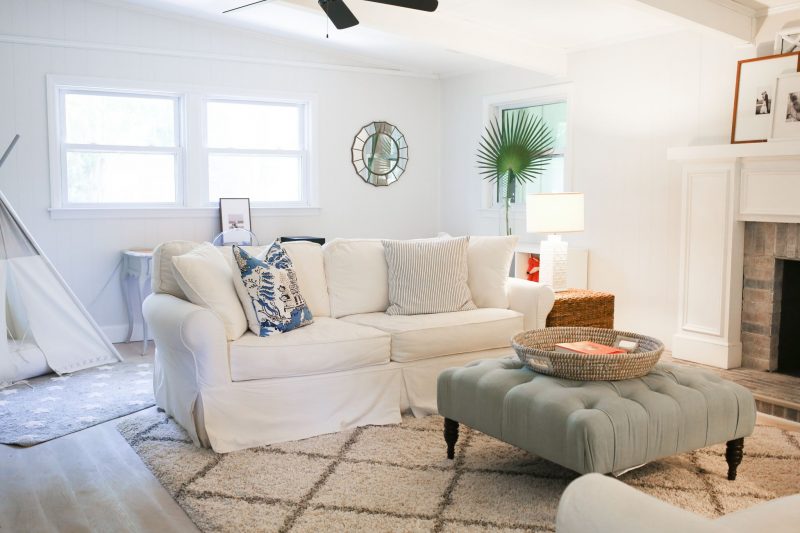 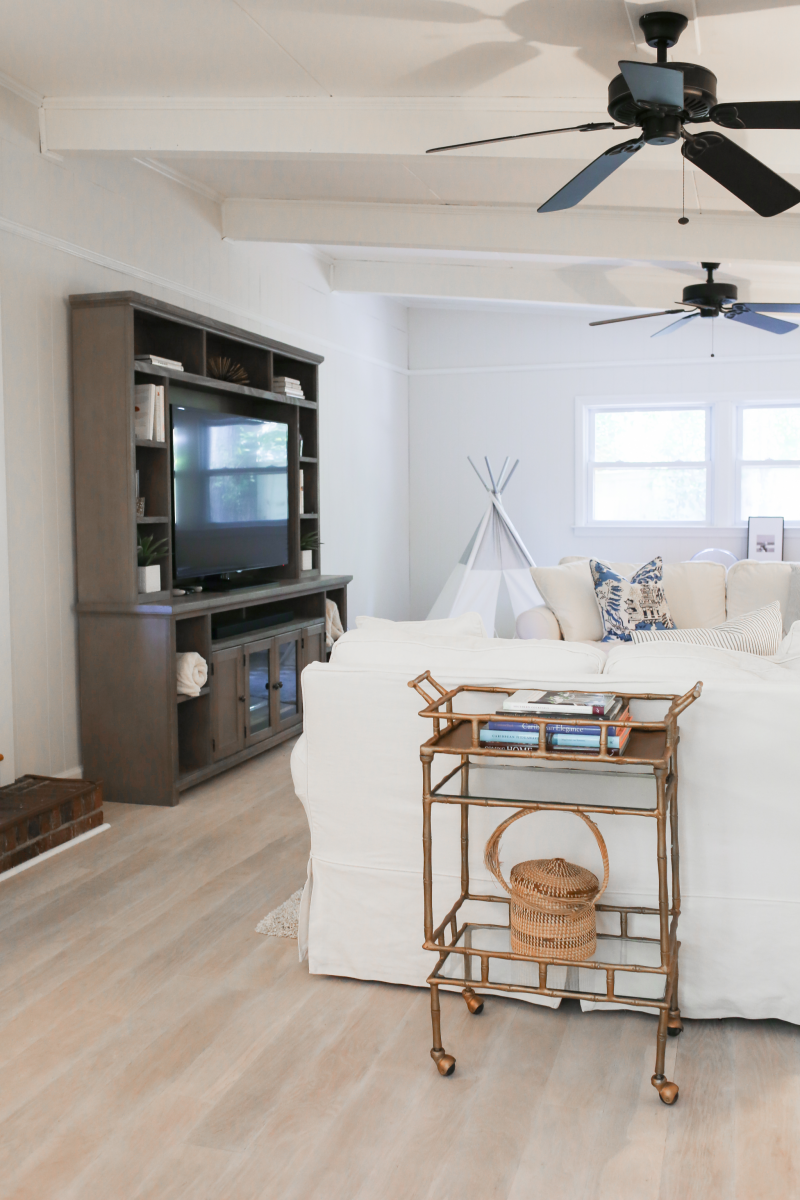 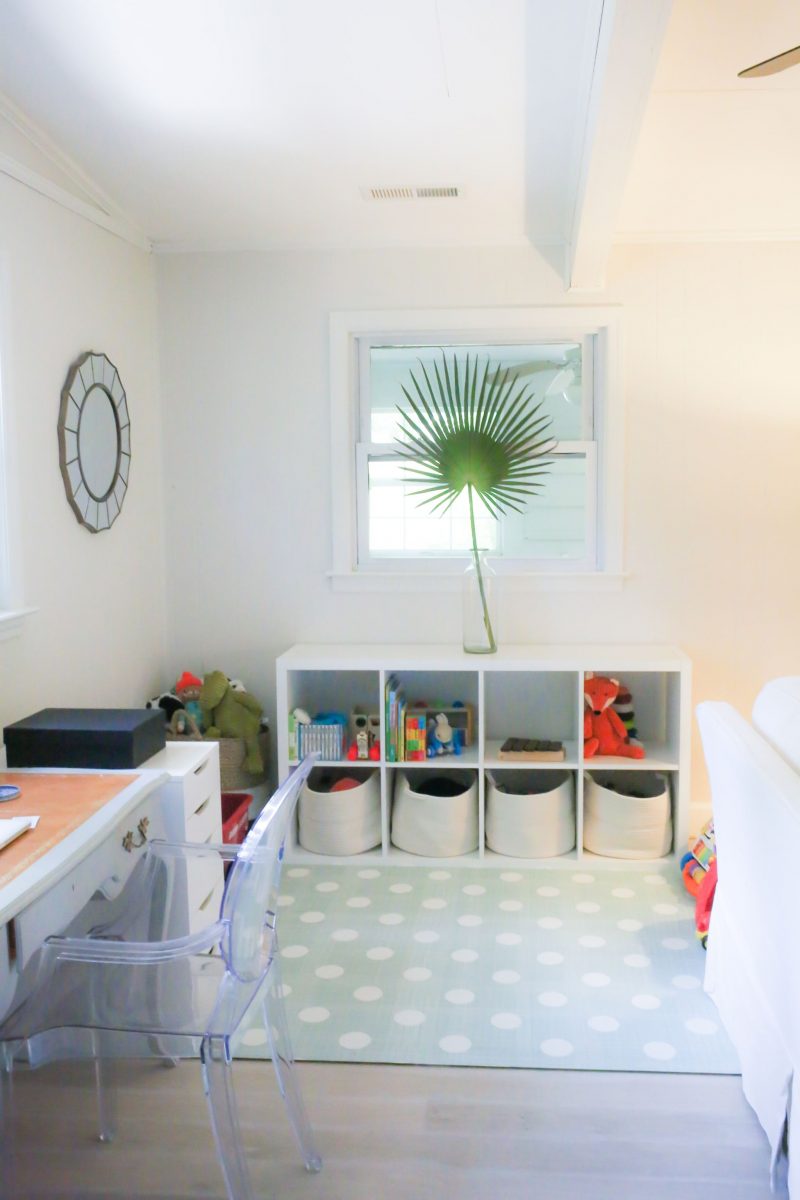 Watson’s cube shelf is from IKEA (just like this one) and I bought the soft baskets on Amazon. They are the BEST! We pull one out at a time in the center of our big rug. He can fall on them or lay all on top of them without it hurting him. Sometimes he puts his head against his baskets as a pillow. They are pricier than other options I was considering, but I’m so glad I got these off the bat rather than getting something hard at the beginning. Plus, they are cheaper now than when I bought them!

bar cart (I found on joss & main and it’s no longer available, but this one is similar)

pillows: a mix of Suite 33, and these and these from Etsy

plant basket (comes in a set of 3)