The beginnings of brunch at one of our favorites. This was right when Hurricane Irma was about to hit us. We went to the beach to see the storm surge roll in. There were surfers

The beginnings of brunch at one of our favorites. 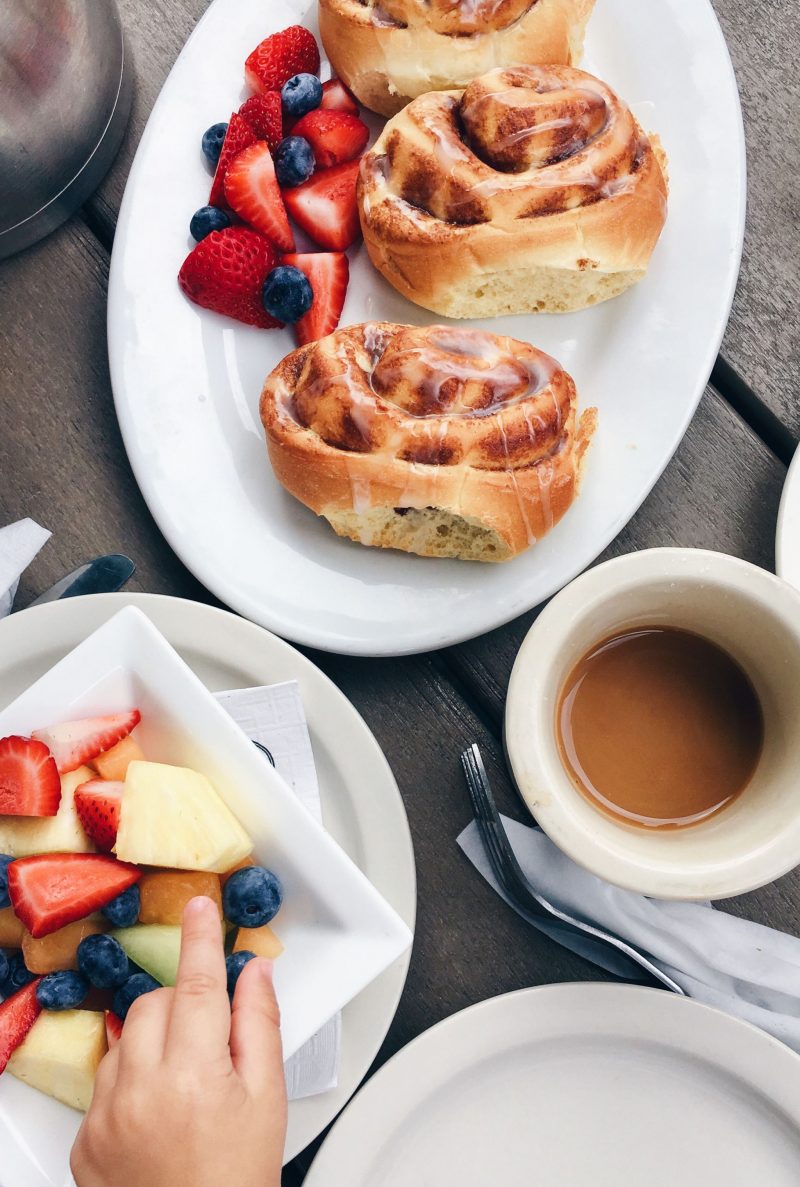 This was right when Hurricane Irma was about to hit us. We went to the beach to see the storm surge roll in. There were surfers everywhere and the waves were giant! Right after we took this picture, the wind scooped up my beloved Blue Rooster hat and it went out with the waves. 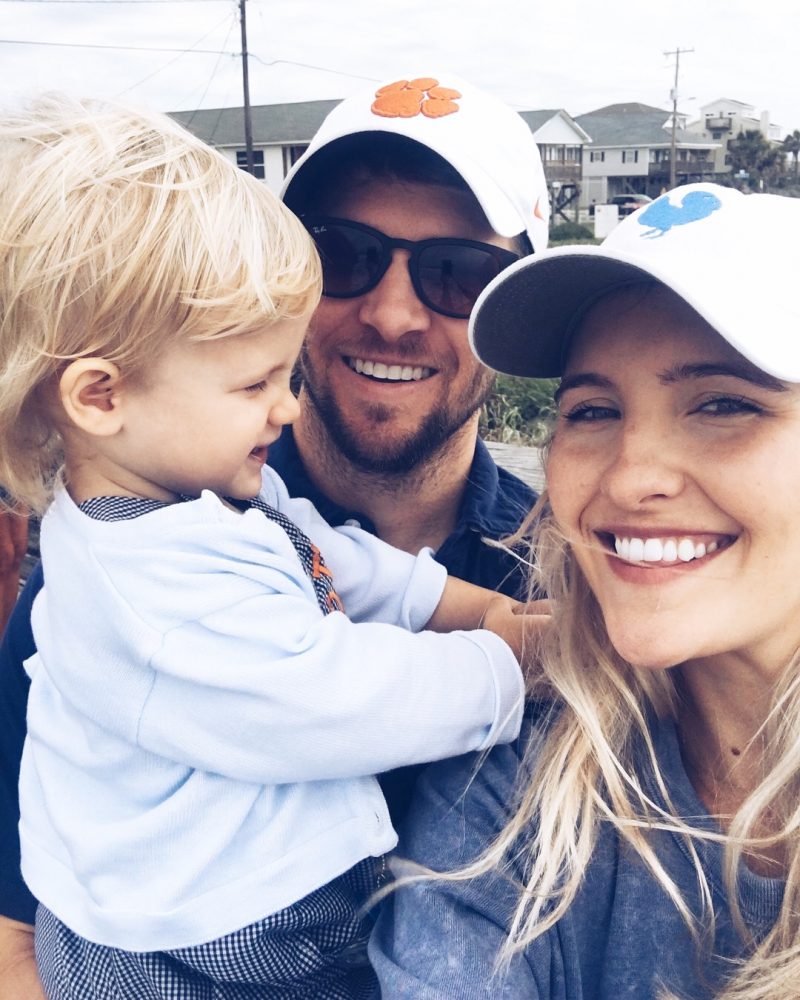 I’m so ready for cooler weather. Just posting about the pictures above made me remember how cool it was right before the hurricane came through Charleston. Now, it’s in the 90s and absolutely miserable. I’m so ready to put on a sweater! It definitely doesn’t feel like pumpkin season around here, but we had to pick out a few of these guys for our porch. 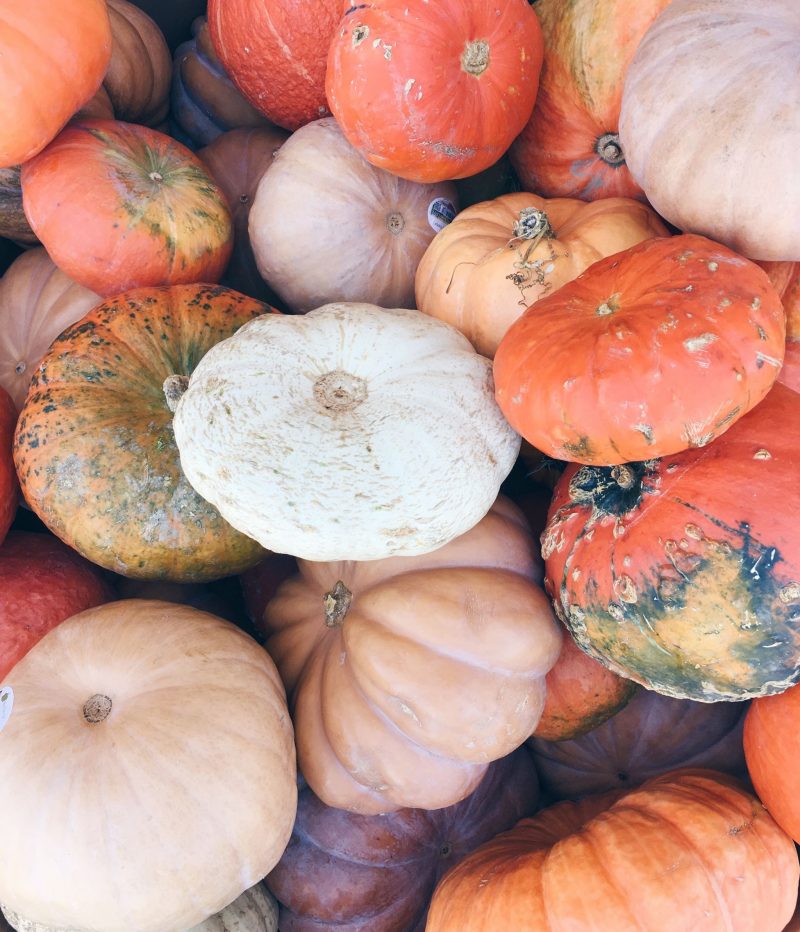 Wedding bells in Sumter for Brandon’s cousin, Bailey. The reception venue was beyond beautiful! My dress is only $24, by the way. Shoes are available here—they were the best investment I made a few years ago because I can wear them with pretty much any formal look. I also have had a lot of questions about Watson’s shoes and socks. His shoes are by FootMates and the socks are Jeffries. His bubble outfit is by the Beaufort Bonnet Company. 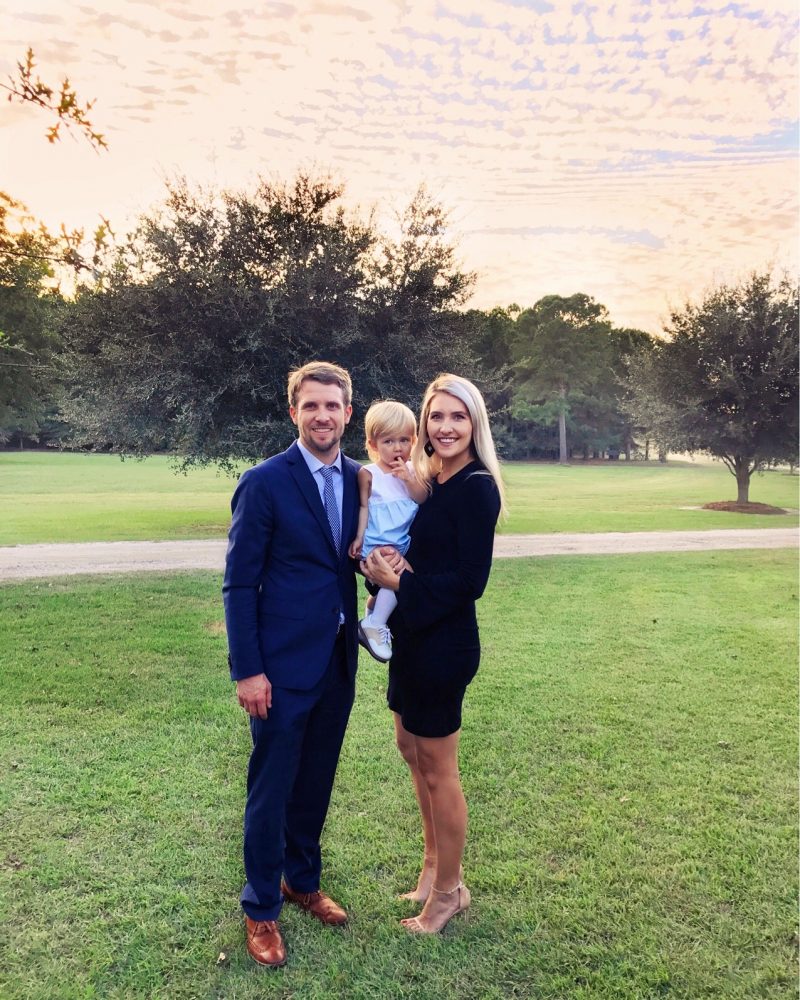 Brandon took me on a fun surprise date the other week. He came home from work and told me his parents were going to be there in about 15 minutes to keep Watson, so I better go change for our date. I had no idea we were even doing anything at all! He said for me to put on something really comfortable.

When we went outside, I saw that he had rented an electric blue convertible. I mean, it was BRIGHT! I think this may have been the first time I’ve ever been in a convertible other than in little small town parades growing up. It was fun! 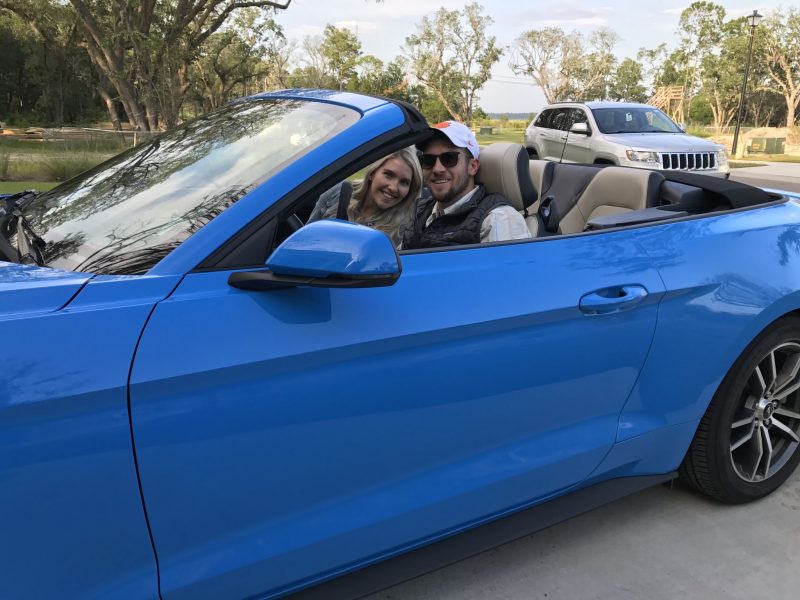 Anyway, he never told me where we were going until we got there about 1.5hr later. We pulled up to an empty field, which I later learned is called Yonder Field.

We were the first car there to watch a drive in movie! It was so, so fun. Can you see the bright blue car? haha! 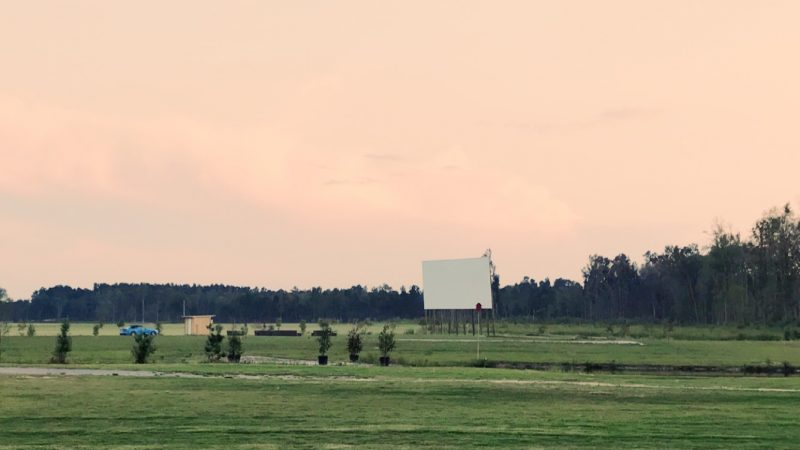 And of course we had to get lots of yummy snacks at the concessions stand. I had no idea Moon Pie Bites were a thing. I do love a good Moon Pie. 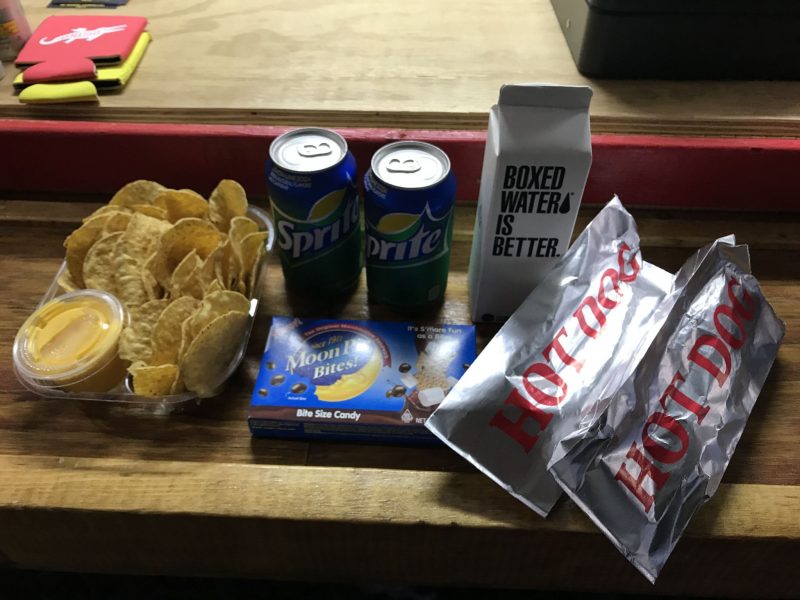 I shopped with Candelabra and Lyndon Leigh for the perfect light fixtures for our kitchen and dining room. I had planned on sharing the reveal for these rooms this week, but I have had a terrible upper respiratory infection and just couldn’t get around to taking the pictures for you guys. So be on the lookout in the coming days for that! 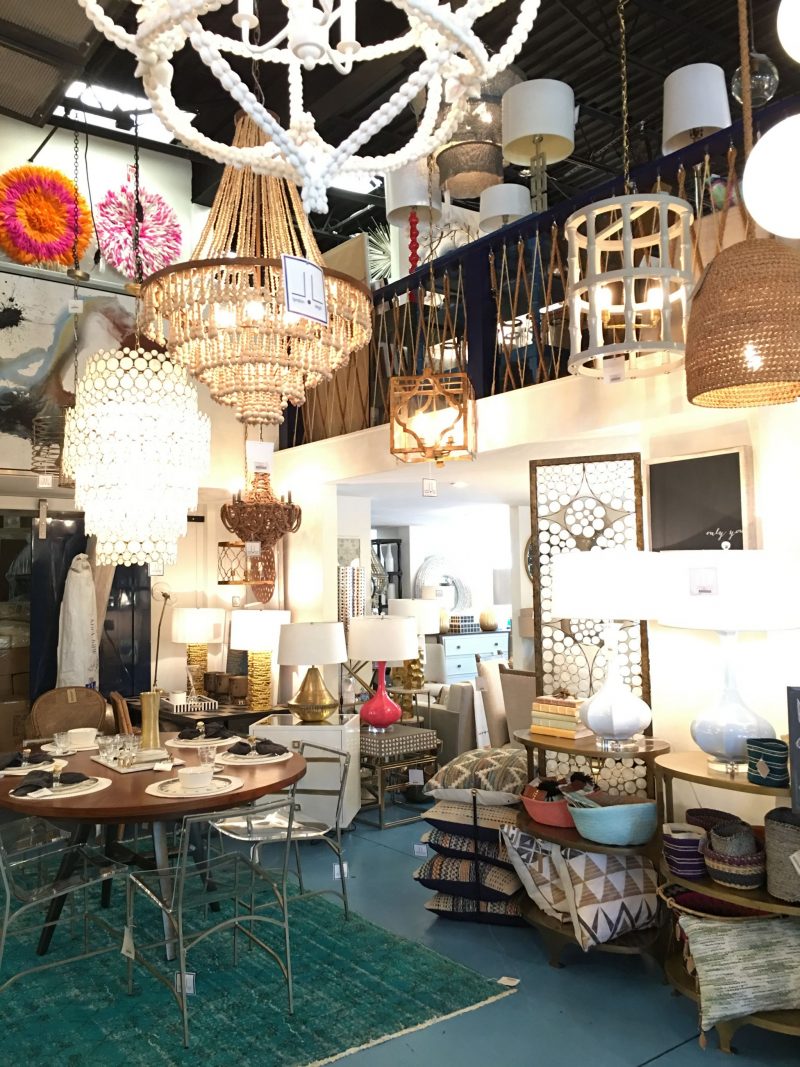 Excuse me while I eat this face with a spoon! (Wearing the Baby Bea Bubble by Lullaby Set. If it isn’t the sweetest thing. Comes in a dress version, too!) 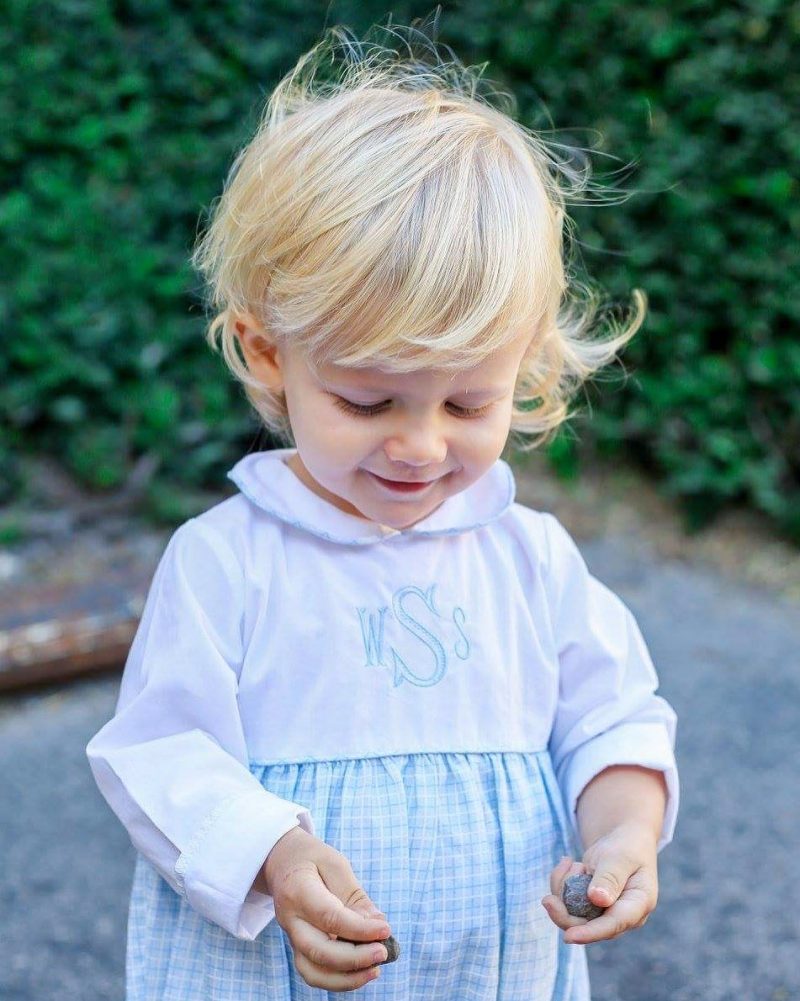 Last Friday night at Freshfield’s Village for some live music and fun on the green. This top I’m wearing is on major sale! I’m wearing the regular version, but the same exact top also comes in maternity. 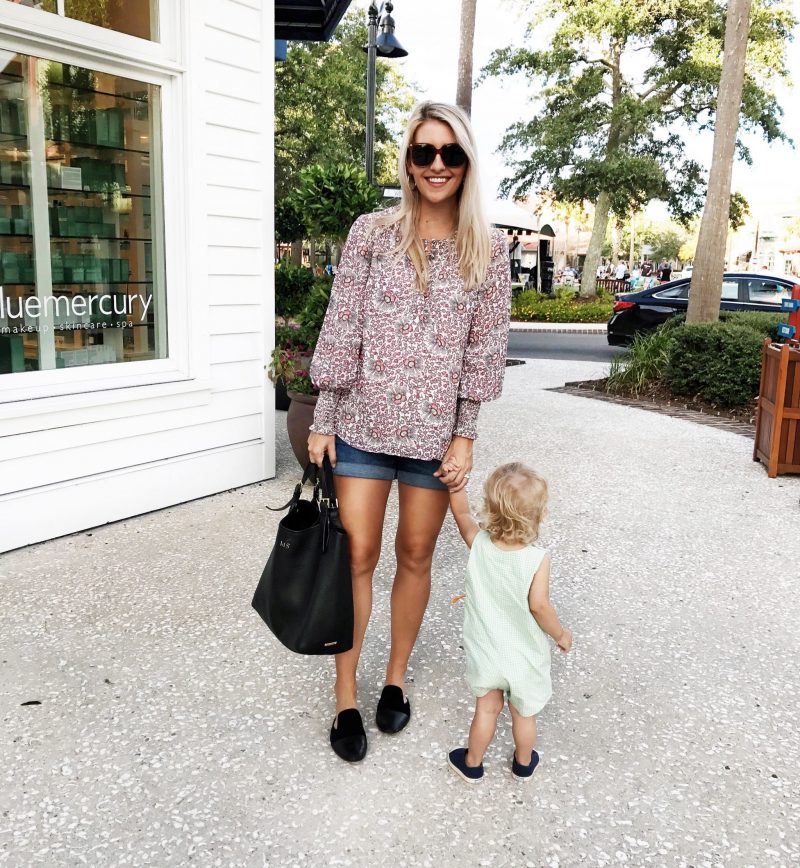 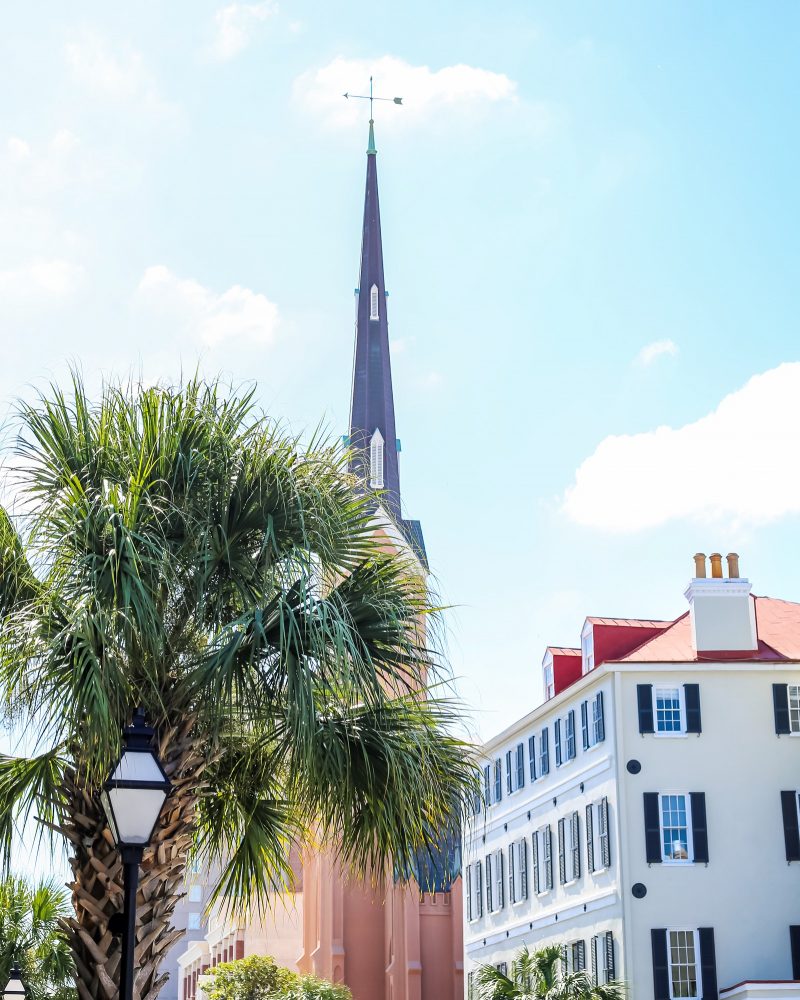 This is random, but back when Hurricane Irma was coming through and we were inside for a couple days, I made myself useful and organized this closet. 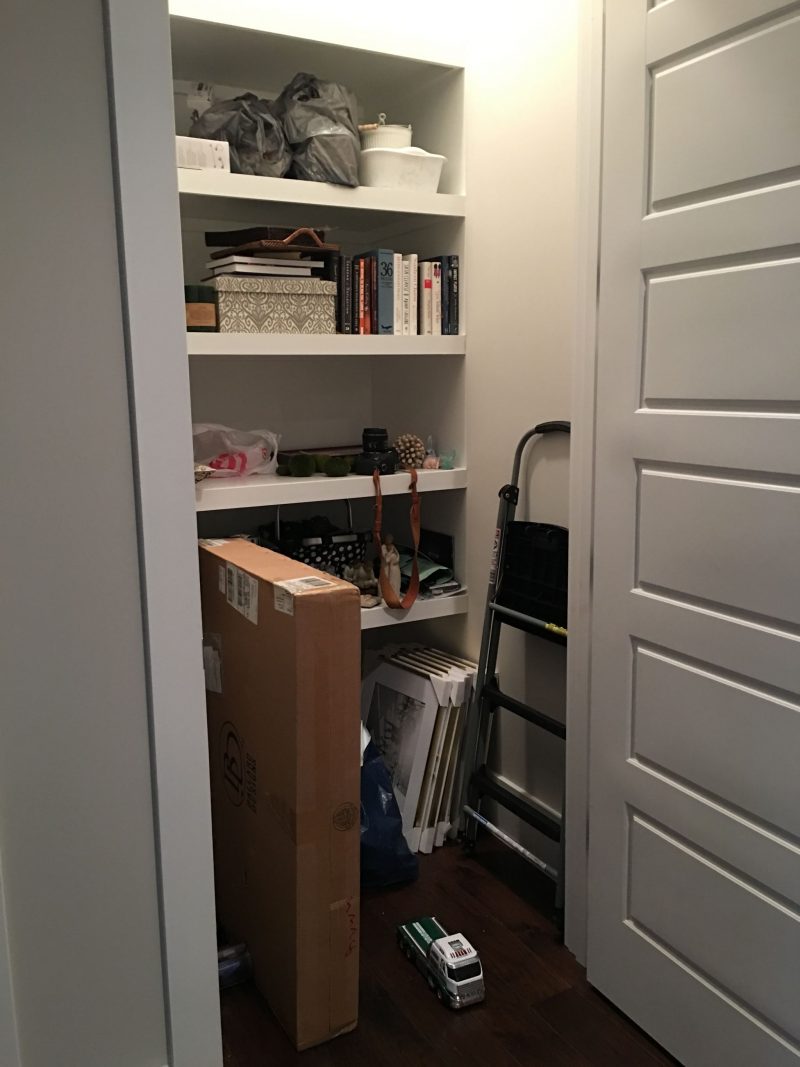 All of these little plastic bins are from the dollar store. So useful around the house! This closet is for crafts, wrapping paper, and office supplies. 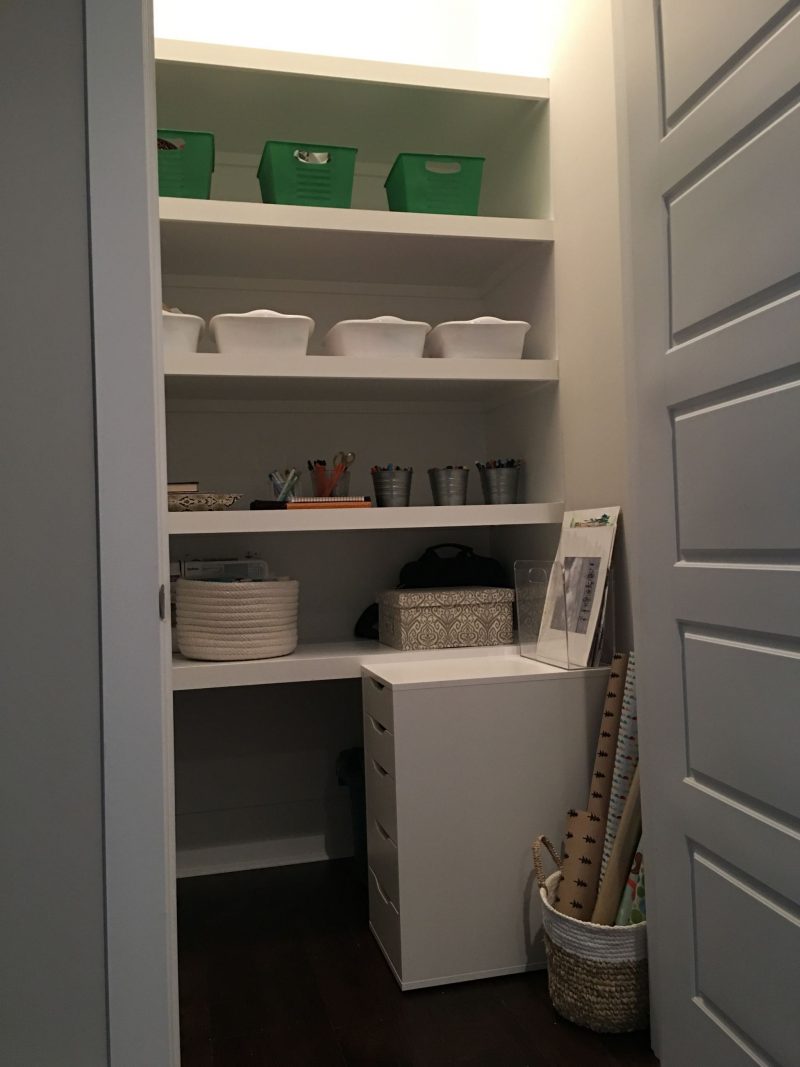 Club Monaco on King Street has to be the prettiest store I’ve ever seen. I’m always finding a new corner in there that is better than the last. And their new arrivals are so good! 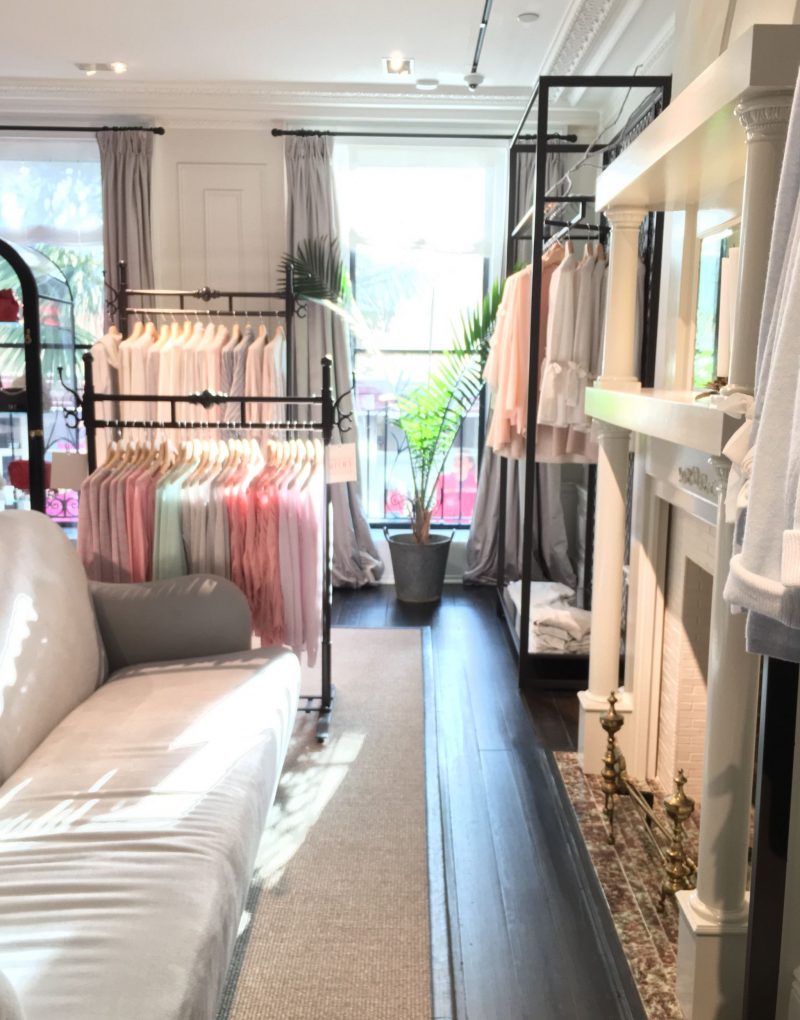 I love that Watson wants to hold our hands everywhere we go these days. 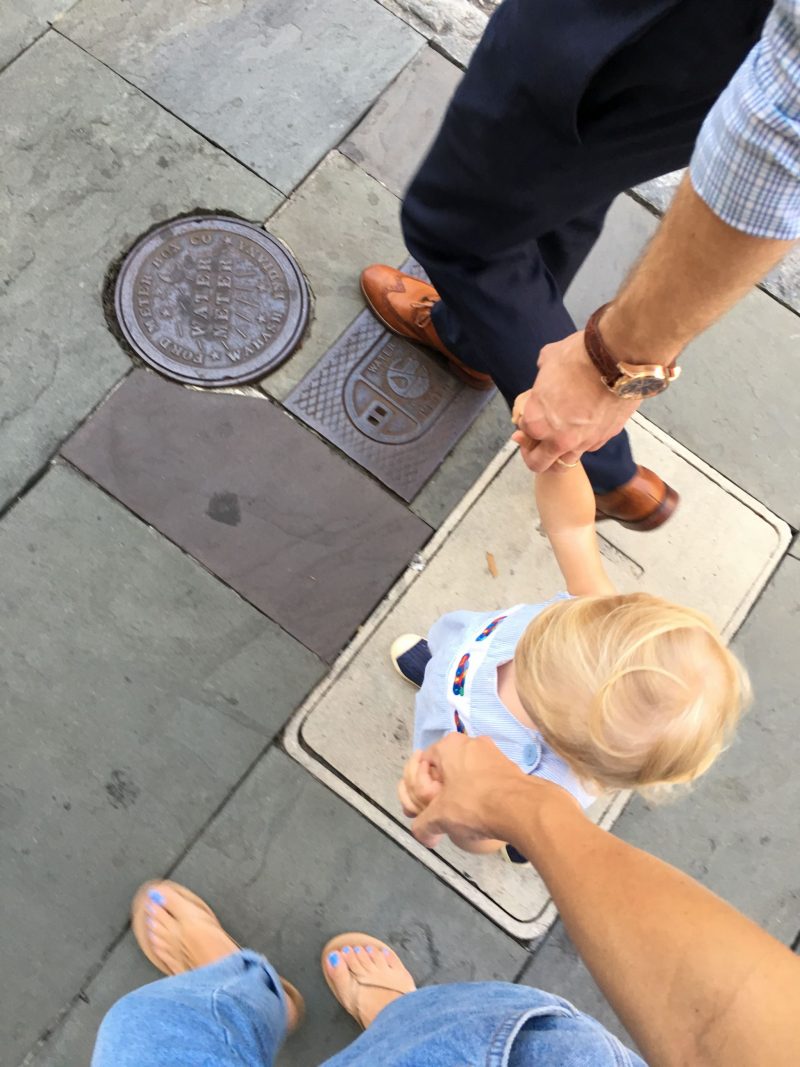 …and he got his second haircut yesterday! 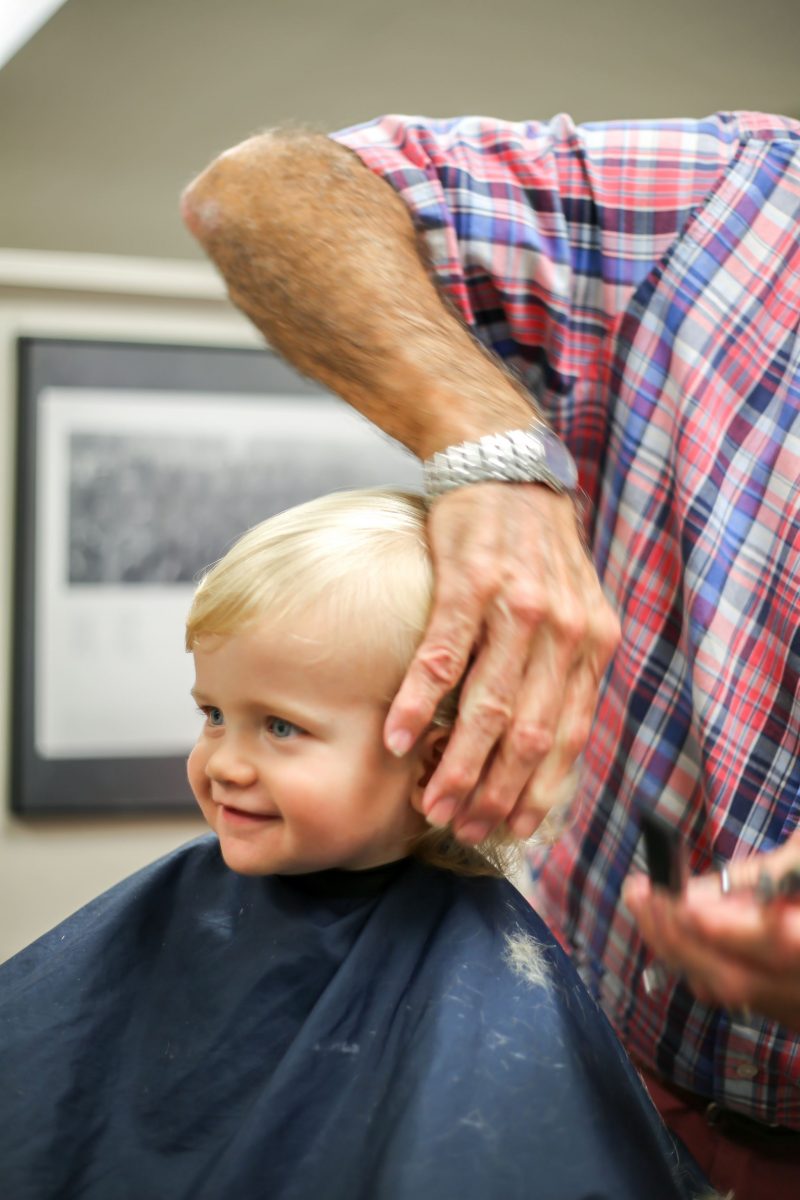 My parents and Brandon’s came too. These are our moms! He is wearing a bubble by Vive la Fete. (I promised to start sharing where his clothes are from!) And the shoes are the BEST toddler shoes ever because they slip right on and are totally waterproof. 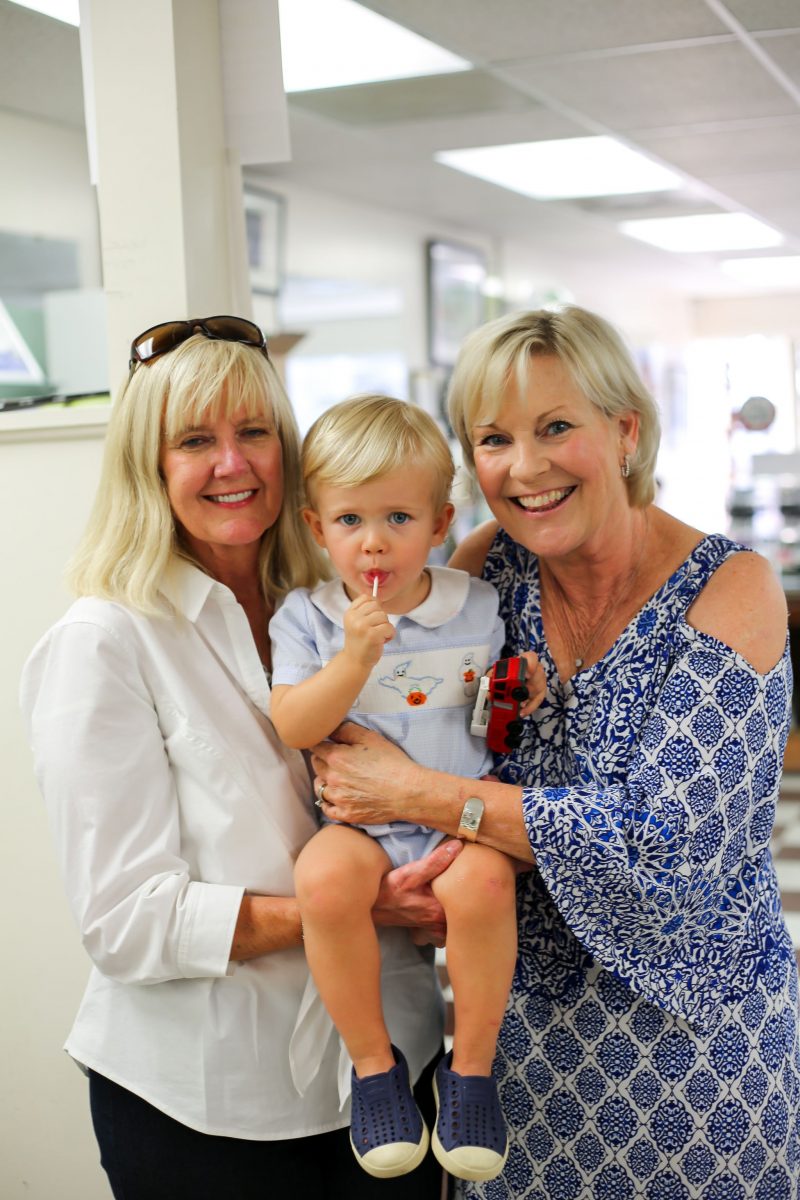 Are you local to Charleston? If you’re in town this weekend, there’s a fun opening reveal party going on all weekend long at Mixson Club!  I’ll be there for some of the events. I’m really excited to check it out because I’ve heard the community has a whole new fresh face. You can check out more details here. 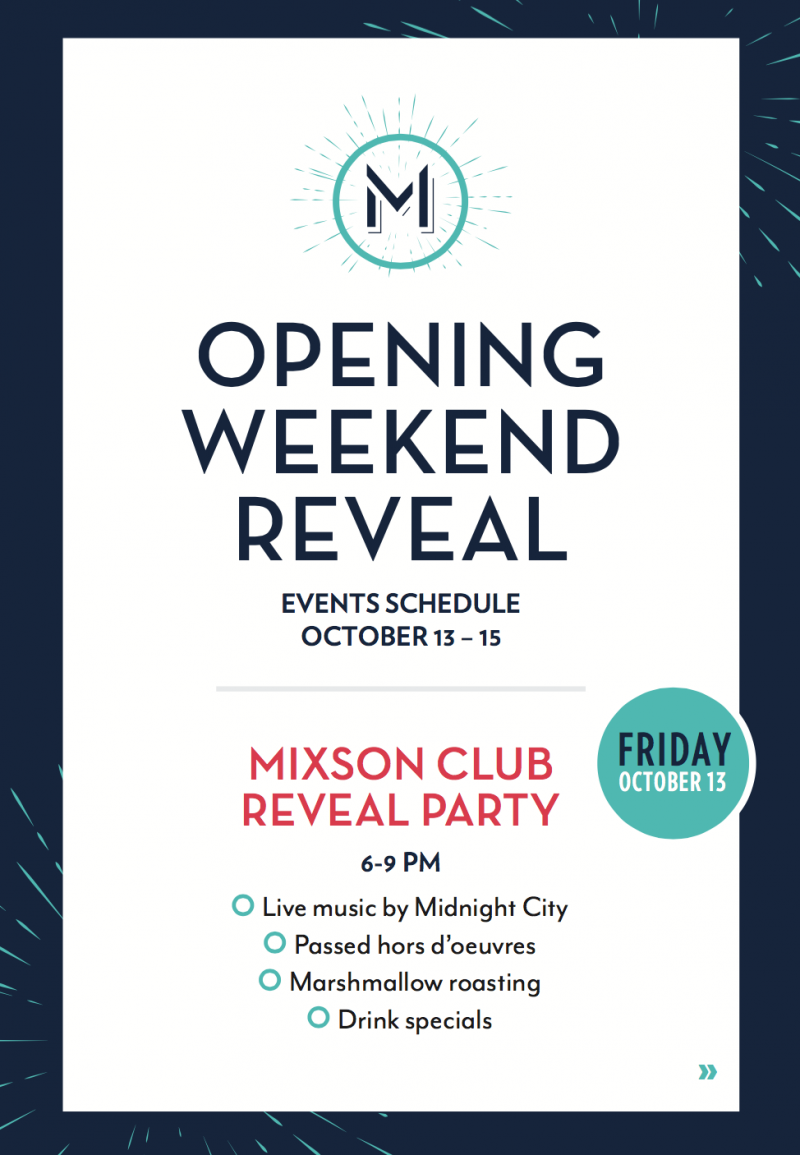 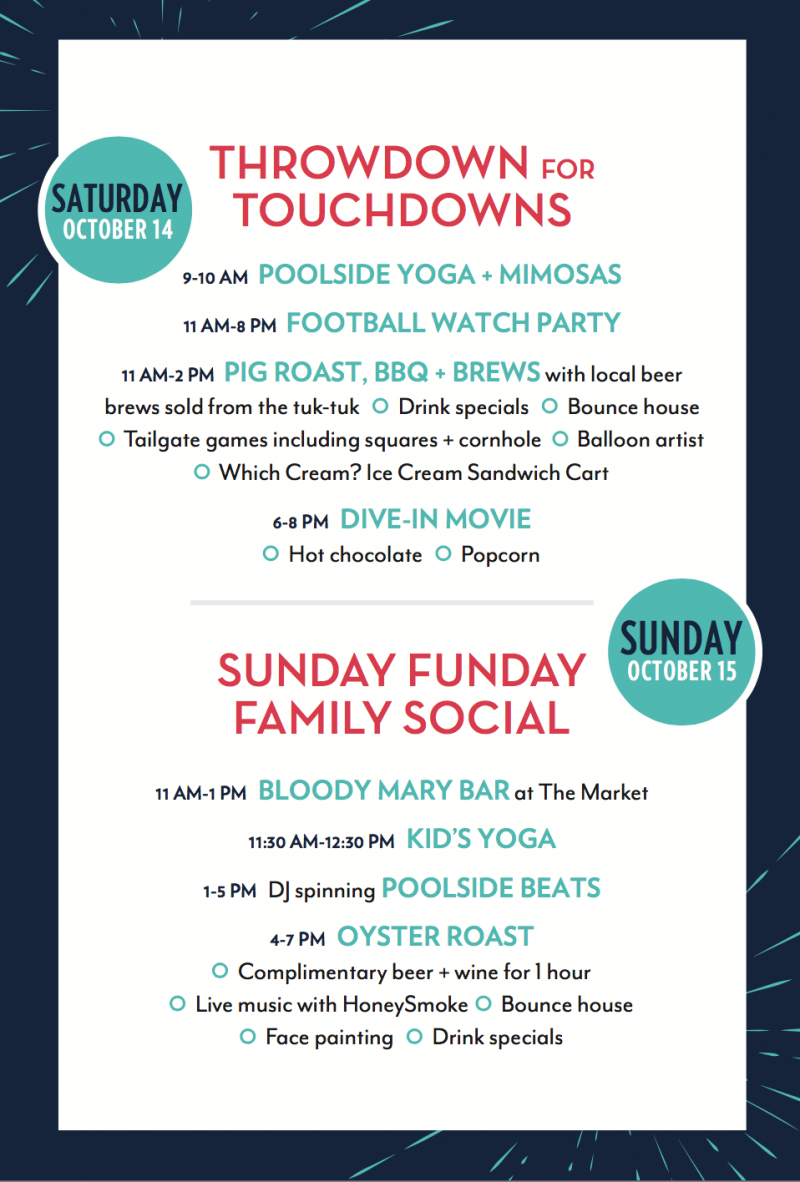