I don’t think I mentioned it here, but I had an induction scheduled at 39 weeks. I didn’t have that “in the birth plan” all along, but we decided this at my 38 week appointment. 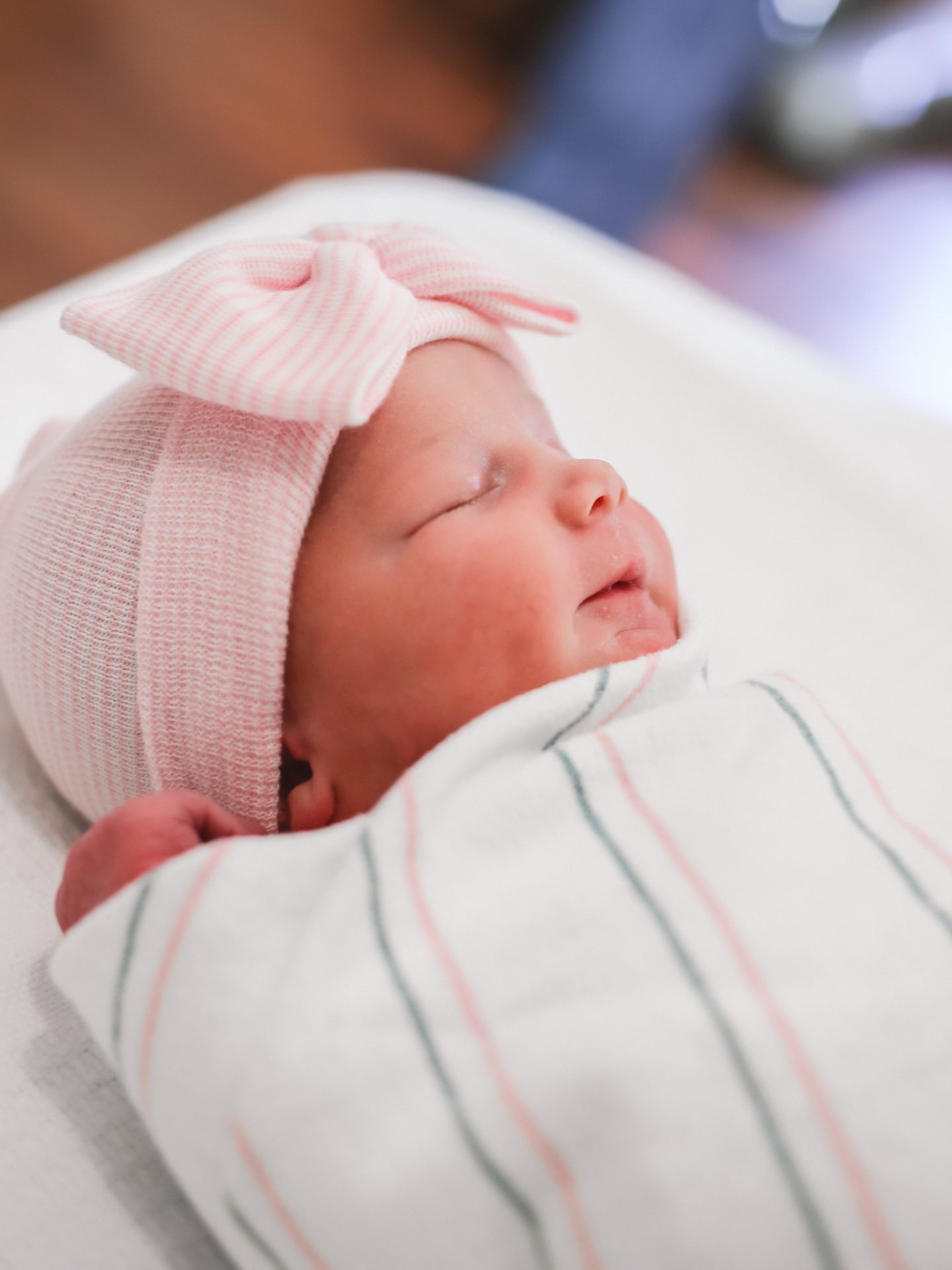 I don’t think I mentioned it here, but I had an induction scheduled at 39 weeks. I didn’t have that “in the birth plan” all along, but we decided this at my 38 week appointment. It just made a lot of sense for us. One reason it did is because we were able to have arrangements made for Watson while we went to the hospital. Not having family in Charleston, I really didn’t know what we would do with Watson when I went into labor… and what if it was in the middle of the night! See, things escalated quickly the moment I went into labor with Watson… once contractions started, they became three minutes apart within 30 minutes tops! So if history repeated, that would give no time for family to get up to Charleston to keep him before we had to leave for the hospital. Scheduling an induction for first thing in the morning erased that issue, unless of course Rosie had decided to arrive early. Also—and this was the bigger concern—she was measuring big all along! Watson measured small when I was pregnant, but he ended up being fairly big at 8lb 7oz when he was born at 39 weeks! His head was so big and round that none of those newborn hats would even fit him! The kind they give you in the hospital would just pop right off his head from being stretched too far. ha! So, needless to say, I was terrified what a baby who was measuring big would weigh! You know, some people just make big babies… and I was honestly thinking I was going to have a 10 pounder based on how much bigger my belly was this time around and how big she felt. In fact, my doctor felt my belly at my 38 week appointment and said, “She is so low and is taking up your entire belly. I definitely think we should go ahead and induce next week.” She is the sweetest doctor who never voices too much of her own opinion when I’m given the opportunity to make decisions, so I really took her suggestion to heart. And the final reason we decided to do it is because I labored through the night with Watson, so Brandon and I both missed an entire night of sleep. Let me tell you, starting off your life as a new parent after just having pulled an all-nighter is not the way to go! We felt like zombies trying to care for a newborn and it was impossible to ever catch up on that sleep. So, maybe a little selfish, but I knew that being induced would mean that I’d labor during the daytime, with a full night of sleep under our belts.

Of course, that full night of sleep didn’t end up being too full because Clemson’s playoff game was the night before and didn’t start until 9pm or so… but three hours was better than no sleep! My parents came up to watch the game with us and to be there with Watson the next morning.

Brandon and I woke up at about 5am on January 2nd, got ready, swung through McDonald’s for breakfast, and made our way to the hospital in the dark. Heading there knowing you’re about to meet your new child… that is the best feeling. We were way too giddy for it being 6 in the morning. And honestly, going somewhere with just the two of us felt like a little vacation!

I got checked into the hospital, walked up to the delivery room, changed into my gown and all that, and then my doctor came in to check my dilation—3cm. Then, my nurse got the Pitocin started on my IV. By then, it was probably close to 8am. She started me on a very small dose of it that was barely starting the contractions, so Brandon and I just hung out watching The Today Show. My nurse told me that whenever I was ready for an epidural, to let her know and it would be about a 10 minute process to get the anesthesiologist to the room to get it in place.

An hour and a half later—at about 9:30am, the contractions were really starting to crank up and I sort of snapped at Brandon, “Ok, ok, I’ve had enough! Epidural time. Go tell the nurse.” She came in the room and looked at my IV fluids, which hadn’t started (which I’m assuming was an oversight… oops) and she said, “Ok, but we will just need this entire fluid bag to go into your IV before the epidural can start.” So she got that dripping, but I was fearful of what the next 35-45 minutes would feel like while waiting for those fluids to go in.

The fluids finished and the anesthesiologist came right in. By the way, if you’re worried about the pain of getting an epidural, don’t be! To me, it is just a little pinch. I totally admire anyone who has had a baby without one. They are miracles.

I had a hard time sitting up for it because the baby had seriously dropped, but we managed to make it work. It was about 10:45am.  Then, my nurse came in to check my dilation about 30 minutes later and I was totally complete and ready to have Rosie!

I knew those contractions meant business.

By then, our families got to the hospital, along with Watson. I asked if they could come in and see us before we start pushing, which they allowed. Watson did not like seeing me in a hospital bed… he knew something was up. But it was amazing to see him and hold him before his sister was born. Everyone scooted out shortly after, but just like with Watson’s birth, our moms stayed in the room with us while Rosie was born. That’s very special to me. 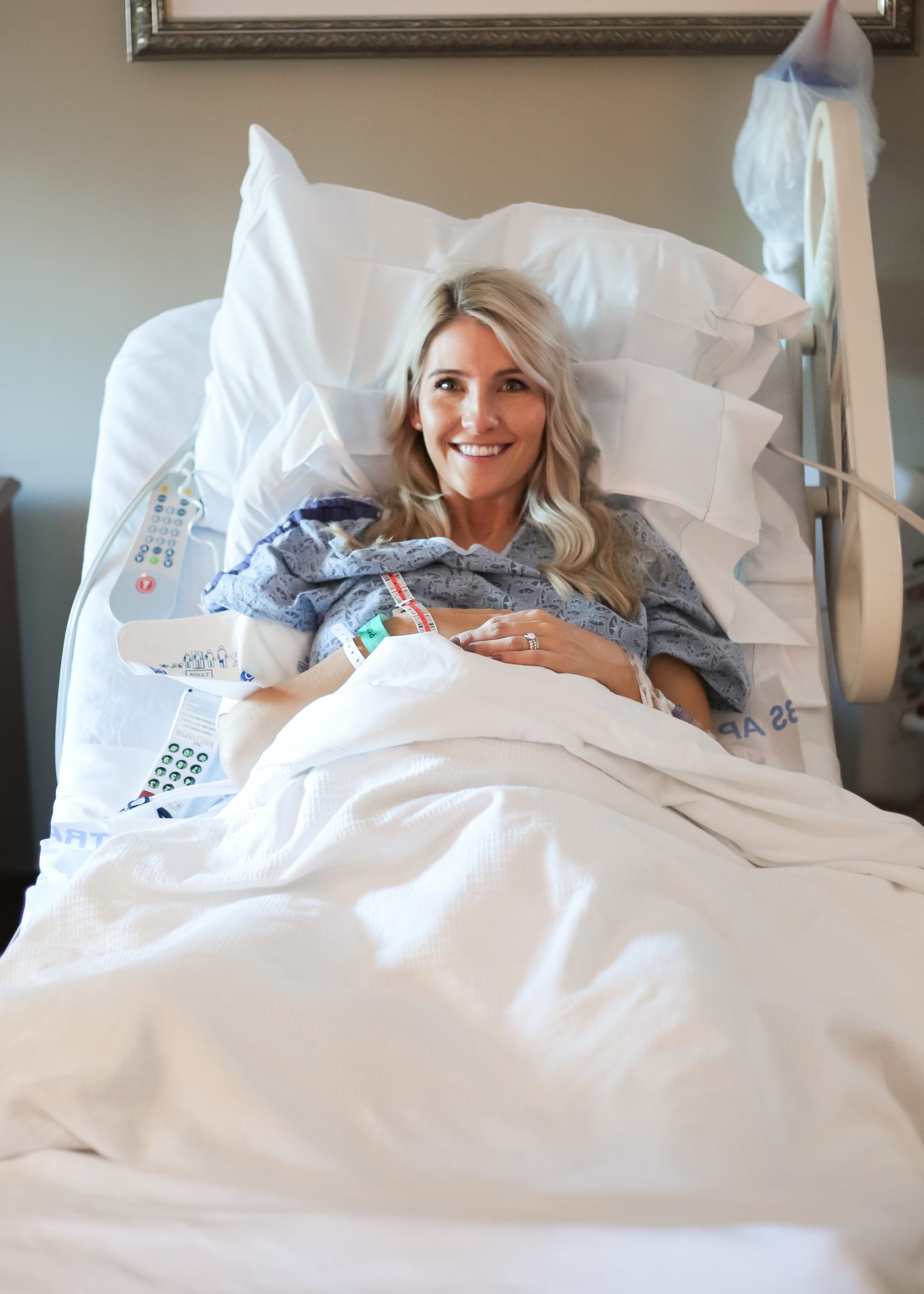 It all went so quickly. I “labored” for only three hours—from about 8am until 11am— and as for pushing? She came on the 4th push! I’m very thankful that both of our children’s deliveries were so uneventful and healthy for us all. 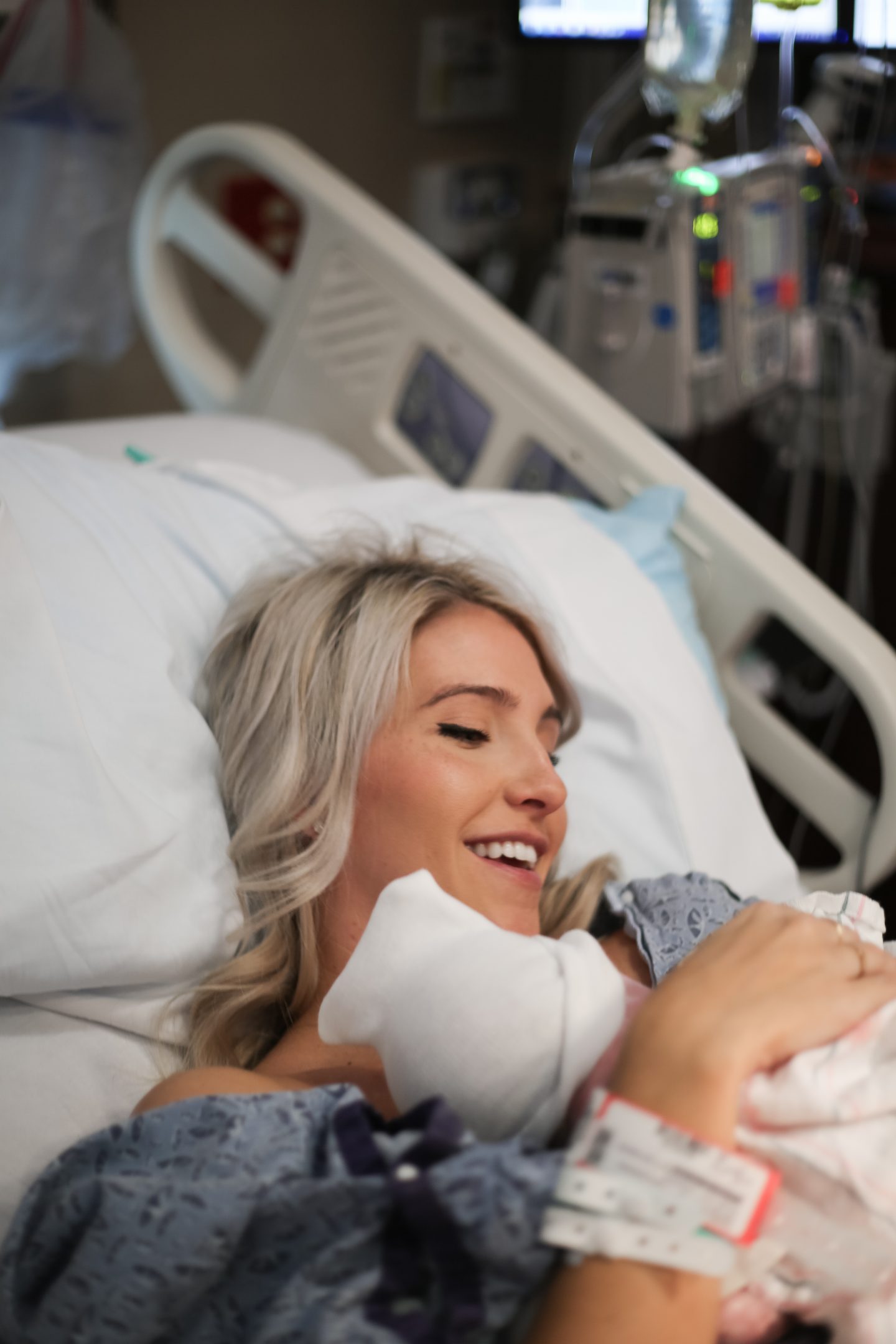 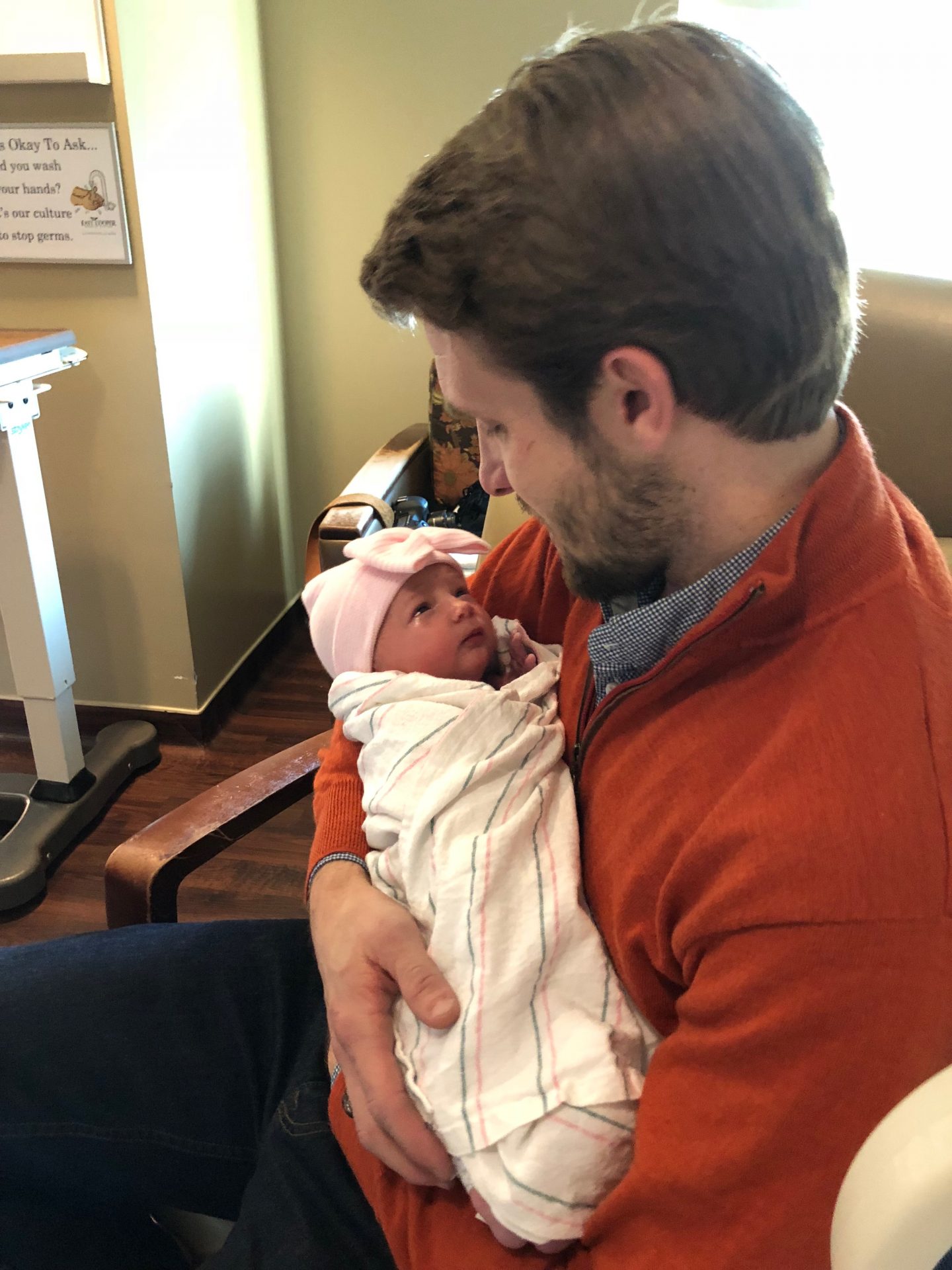 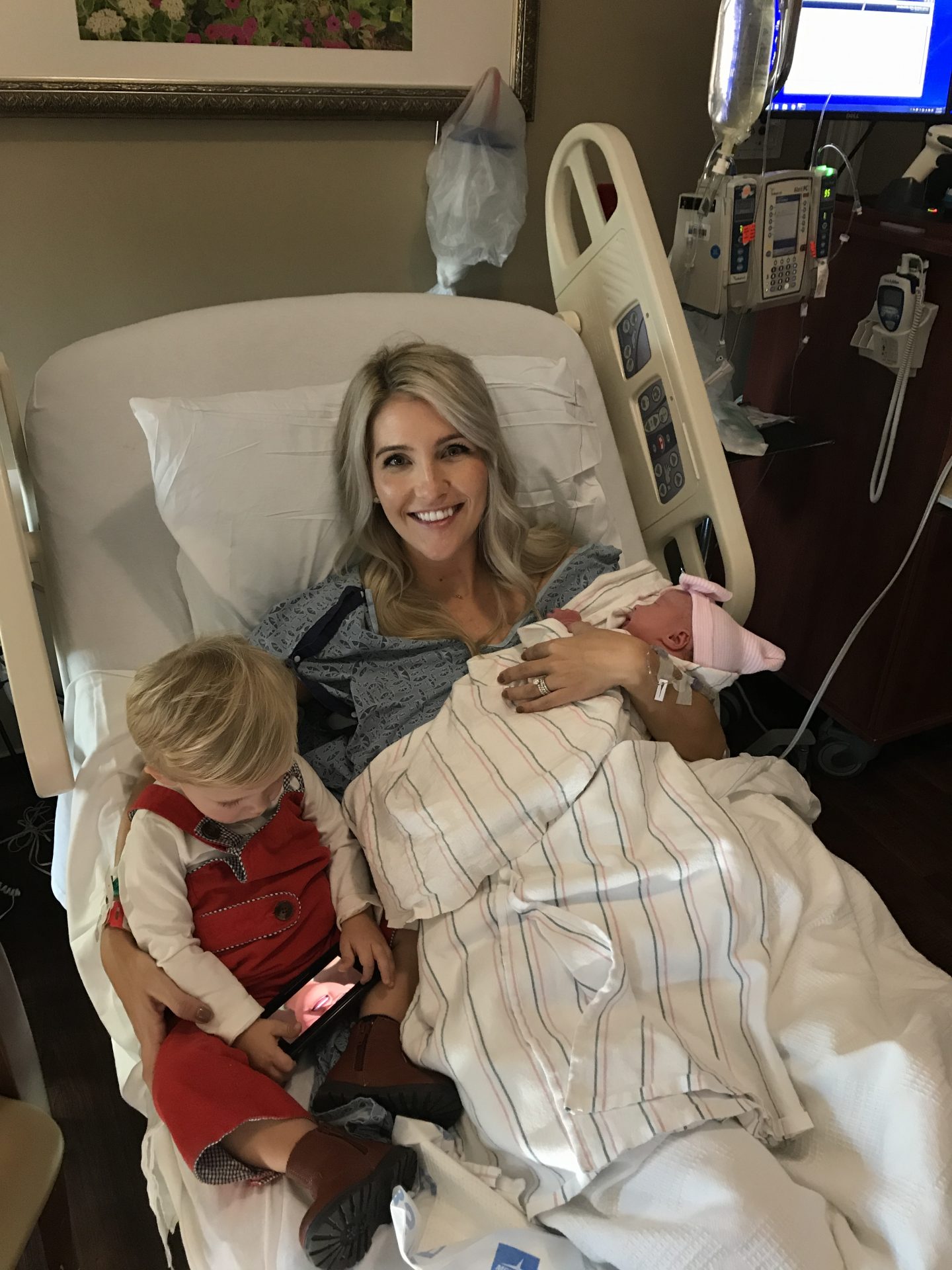 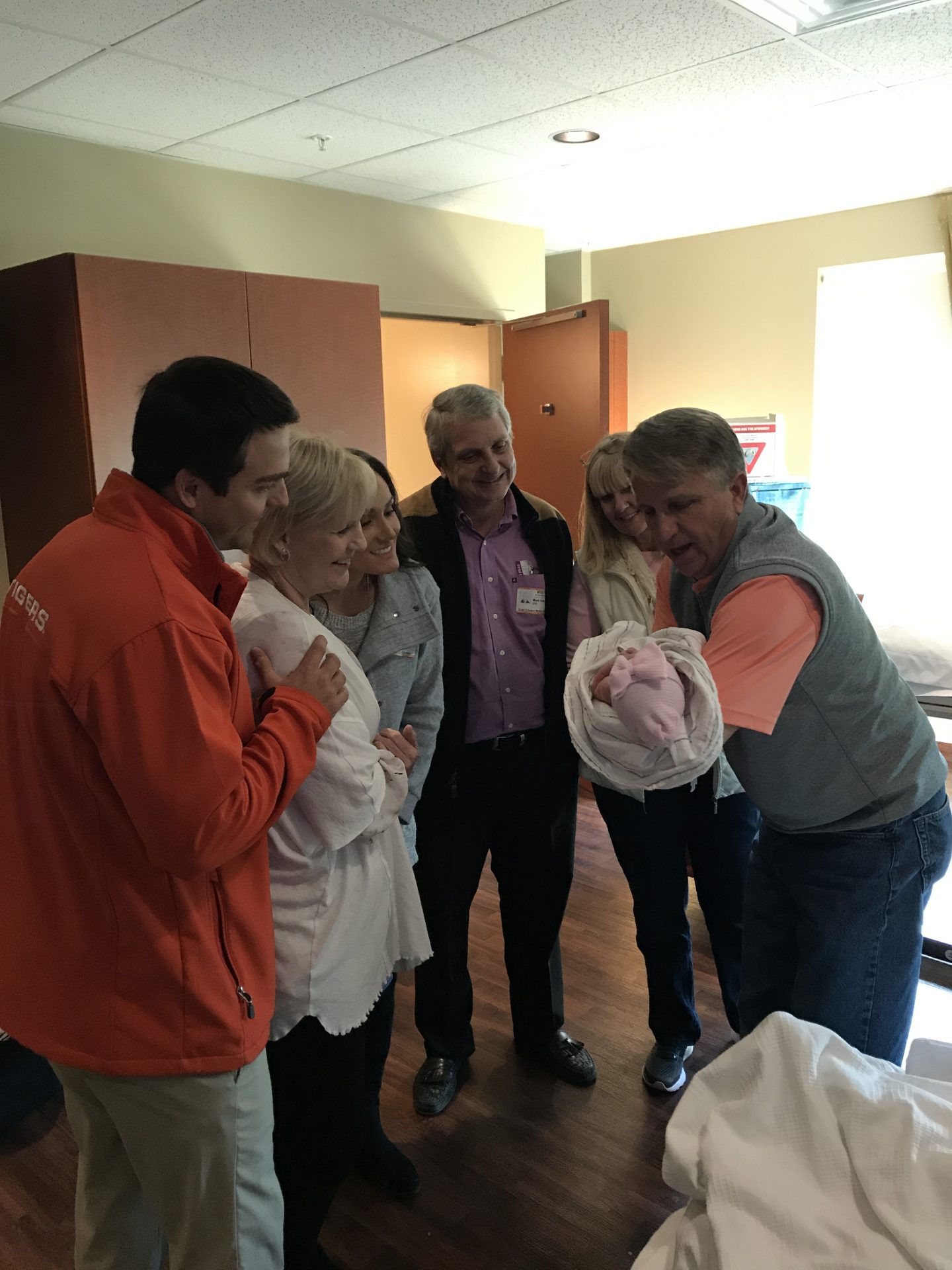 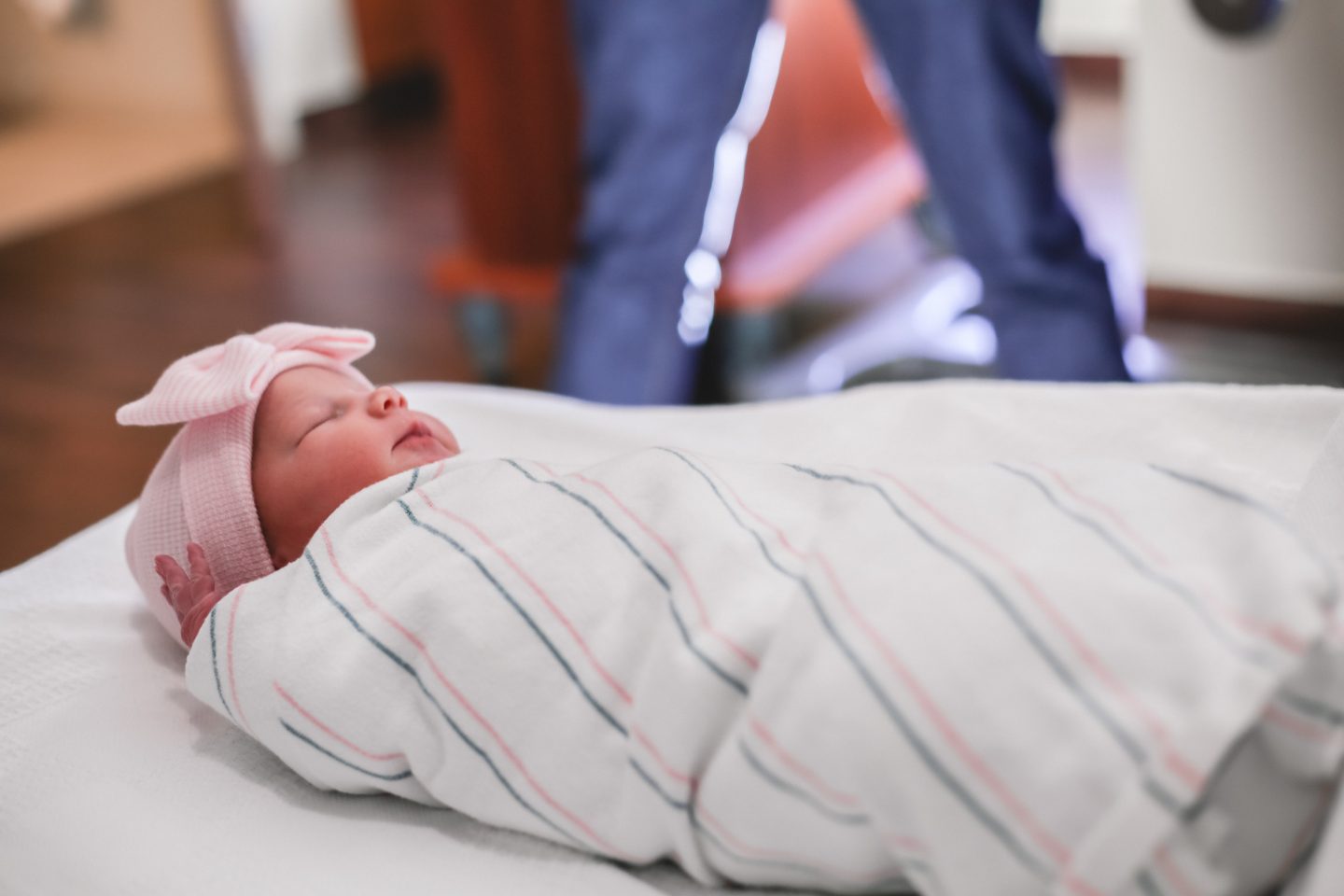 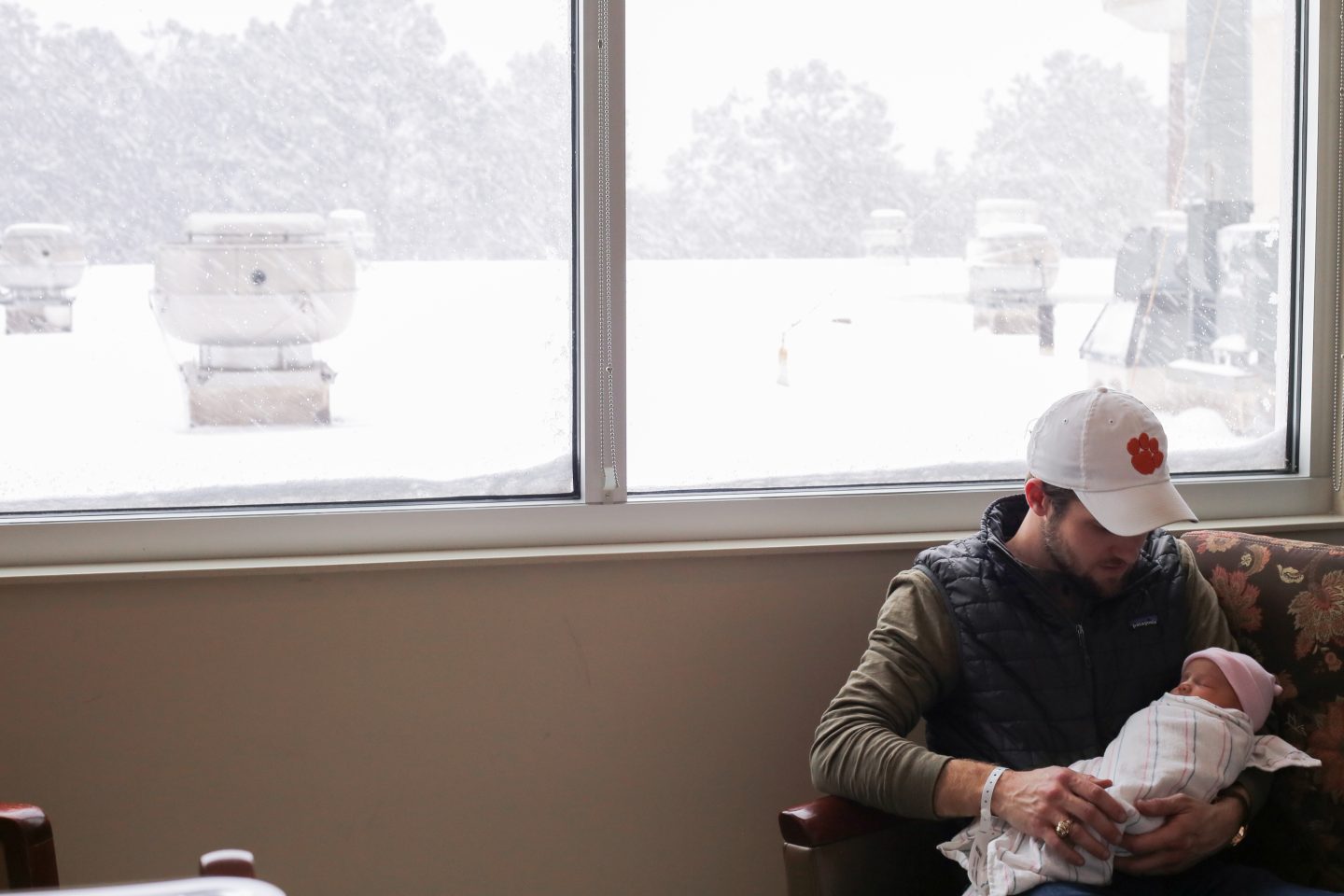 Oh, the snow! How could I leave that out?

The night Rosie was born, some freezing weather came to Charleston. In fact, given that all was okay with Rosie and with me, we were already making plans with the nurses and doctors to head home the next afternoon—right at the 24hr mark after she was born. We wanted to get out of the hospital before the freezing rain, ice, and snow started that next day. But as it turned out, the bad weather started the next morning instead—earlier than we had expected, so we stayed put.  It snowed about 6 inches here in Charleston, which if I’m not mistaken is the most snow we’ve had since 1989, which happened just a handful of months after I was born, oddly enough! Charleston is just so unprepared for snow. I think I heard that our county owns just ONE snow plow! The nurses mostly had to stay on the postpartum floor in the unused hospital rooms. The cafeteria had super limited foods and all the nearby restaurants were closed… let’s just say we ate light while we were there those 2.5 days! People just couldn’t get to and from work! We weren’t even able to see a pediatrician when we were being discharged from the hospital because the doctor wasn’t able to make it to the hospital that Thursday morning. 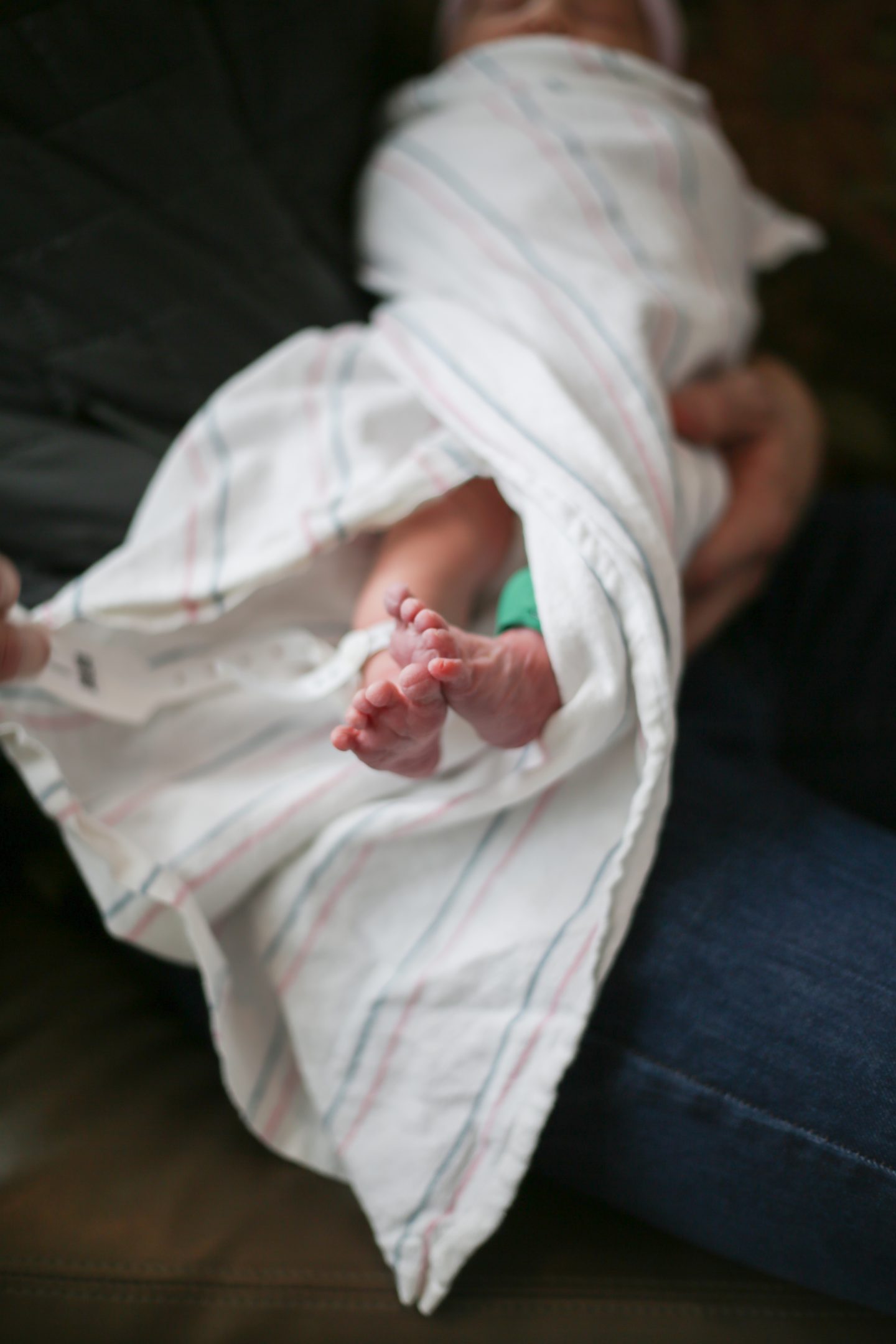 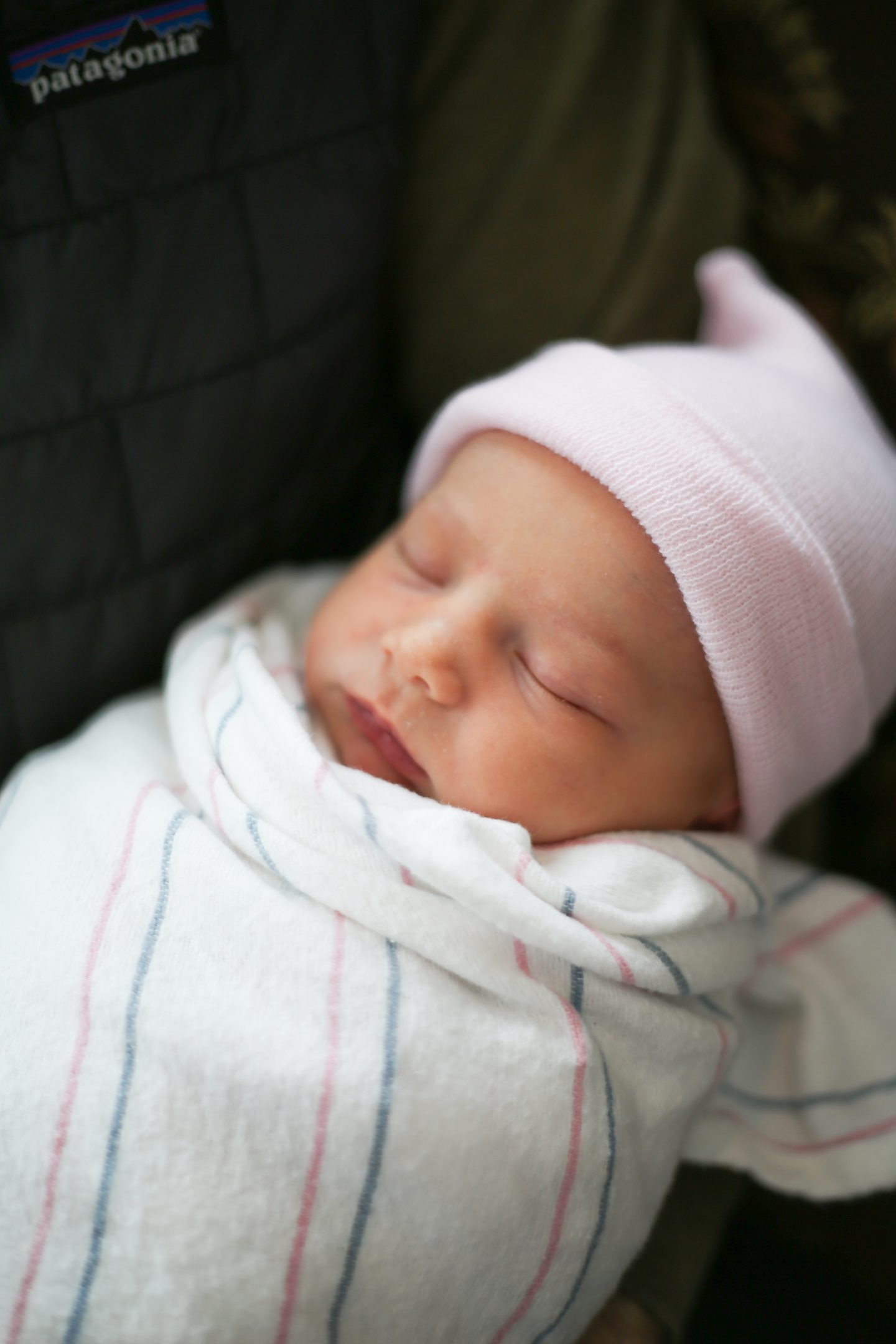 We are so blessed with our Rosie. Sharing more soon! xo