After I completed Invisalign and was so happy with my results, Brandon, who has always had the most beautiful teeth after spending 15 years in braces as a child (kidding), decided he needed to make

After I completed Invisalign and was so happy with my results, Brandon, who has always had the most beautiful teeth after spending 15 years in braces as a child (kidding), decided he needed to make his teeth absolutely perfect. Always a one-upper, that guy. I’m teasing, but really he was having some pain because one tooth was shifting and it was sometimes tender for him, causing a bit of aching throughout his mouth. His dentist said that could easily be fixed by doing an “express” version of Invisalign, which costs less than the traditional route and also is quicker! He was game.

Speaking of his dentist… if you followed my journey with transforming my smile, you may already know that I go to Dr. Tatum at Tatum Dentistry. When I was researching dentists and orthodontists, I found that she is a “Gold Invisalign Provider” and has also been voted best dentist in Charleston for quite a long streak. That’s why I started with her, but I loved her so much that Brandon and I both started going there for our general dentistry needs as well. After I shared my experience on my blog, Dr. Tatum was so excited because a lot of you started going to her for Invisalign as well, so she graciously offered us a great deal to do Brandon’s Express treatment.

The reason for this post is because I wanted to be able to show you how Invisalign isn’t just for people that have a super crooked smile (like mine was), but also for people that may have one small area of concern, too (like Brandon). A lot of you reached out after I shared my experience and said you had one pesky problem area and were curious about trying Invisalign. And do you want to know the biggest benefits of fixing it right away? If left alone, it’s going to keep getting worse and eventually could cause crowding in new areas and more issues across the whole mouth. Not to mention, as I already mentioned, Invisalign Express is less expensive and quicker than traditional Invisalign.

If you want more background on Invisalign, why I chose it, a Q&A with Dr. Tatum, tips for getting started, and more, then click here! If you want to know about cost, length of time, and things like that, head right here!

First of all, I’ve already hinted that his teeth were nearly perfect, or so they appeared to be. But, you’ll see below that he has one tooth in the upper left of the photo that had turned due to crowding. That’s the one that was causing aching throughout his entire mouth and was the issue at hand to fix. 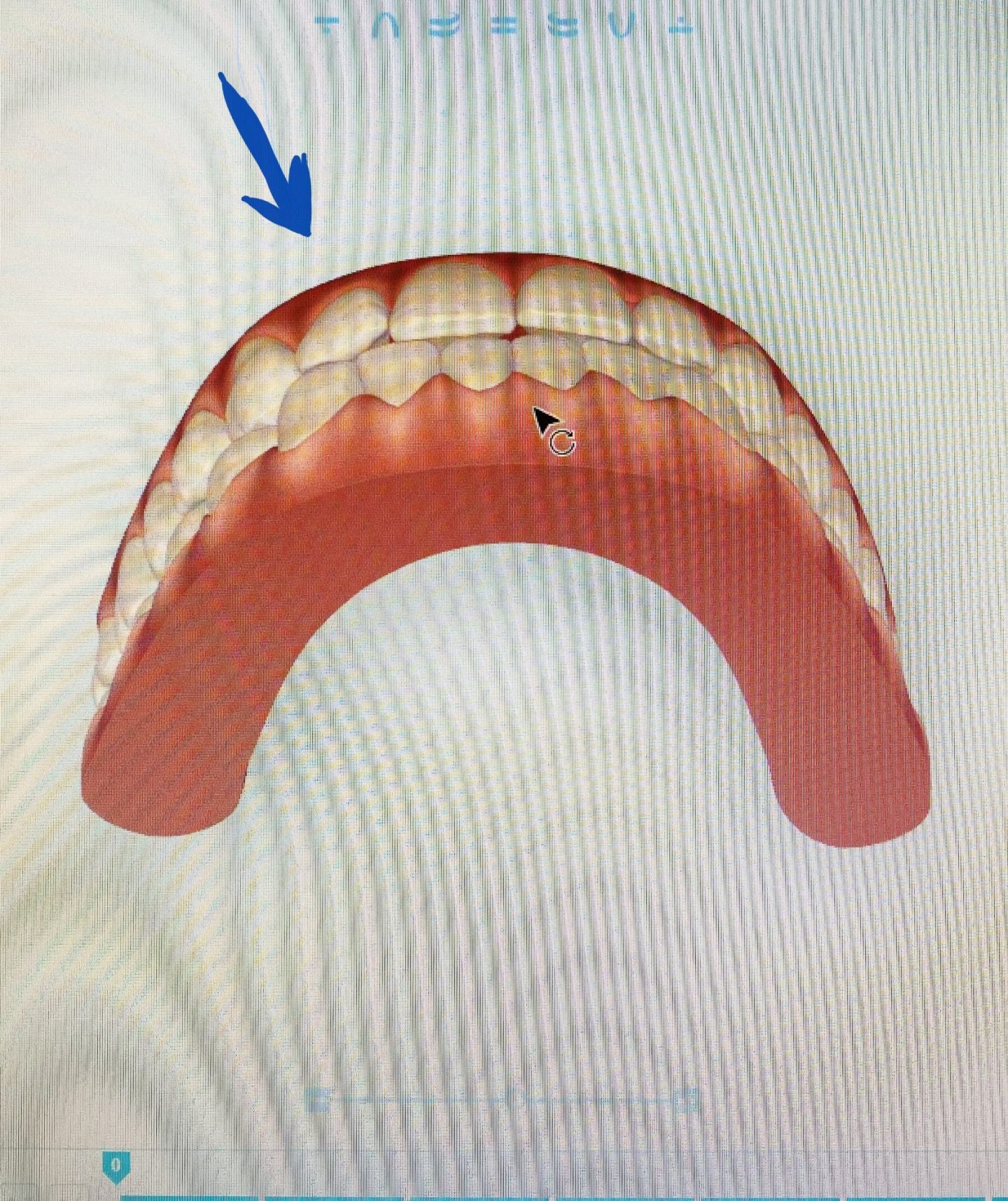 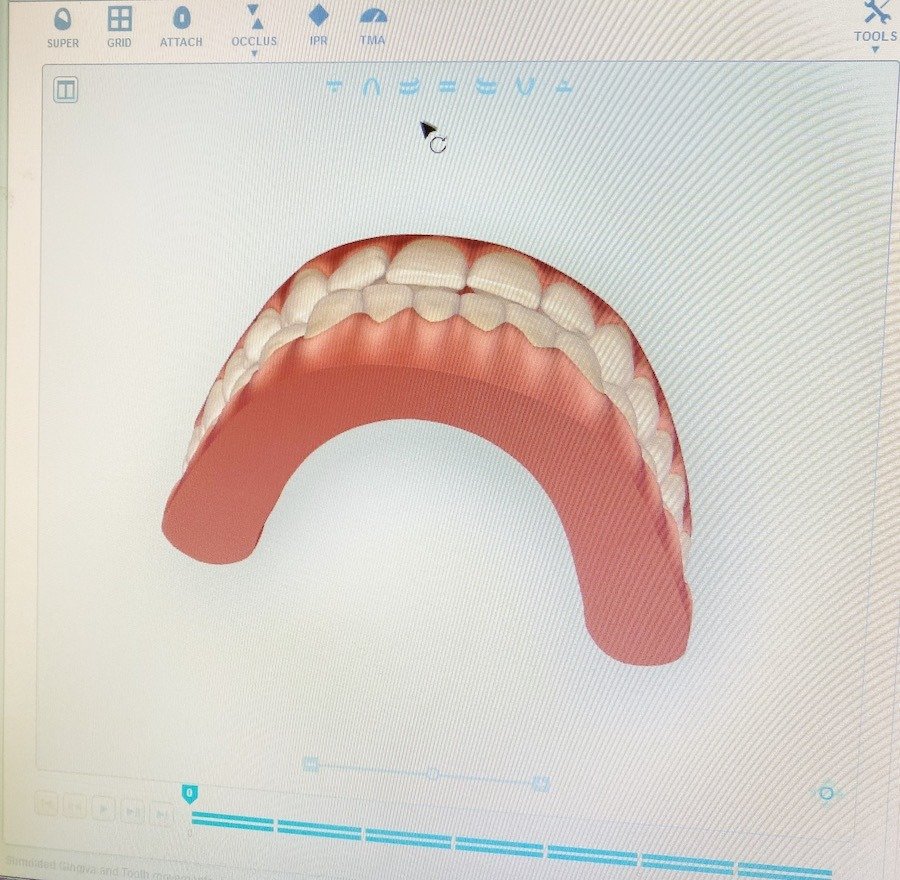 Fast forward to about 10 weeks later, his entire mouth was shifted around, making room for that one tooth to turn back the way it should, as shown below. 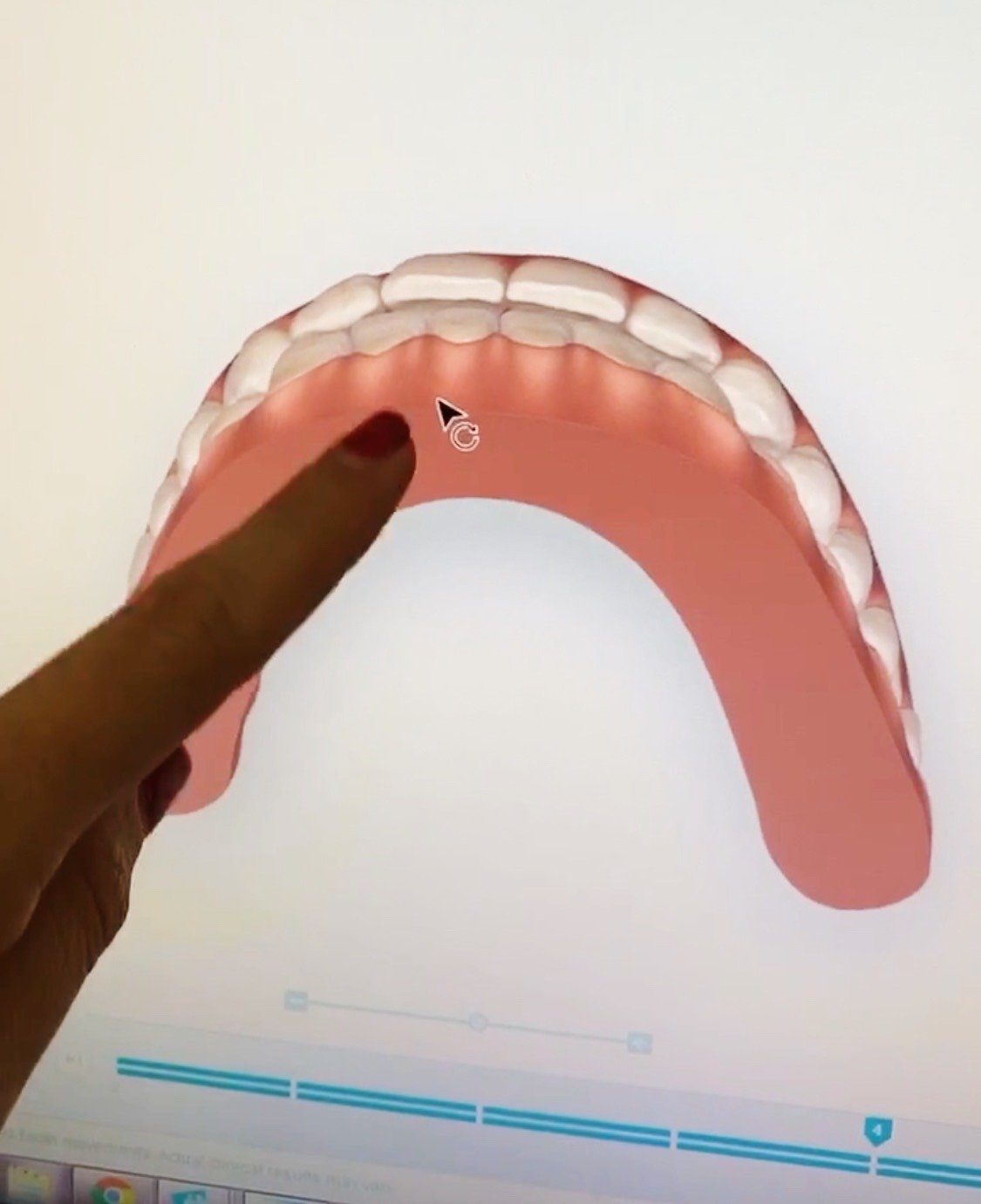 In an attempt to show you this “in real life,” here are a few photos of his smile “before” Invisalign. I know at first glance you’ll just see straight teeth, but if you look to his right side (your left) of his mouth, then you’ll see that one “problem tooth” and kind of notice how it started moving over another tooth and turning. The main concern for him wasn’t vanity, but it was the aching it was causing and the worry that without fixing the crowding everywhere else in his mouth (even though it was nearly undetectable to the naked eye), then this would keep getting worse and affect more teeth. 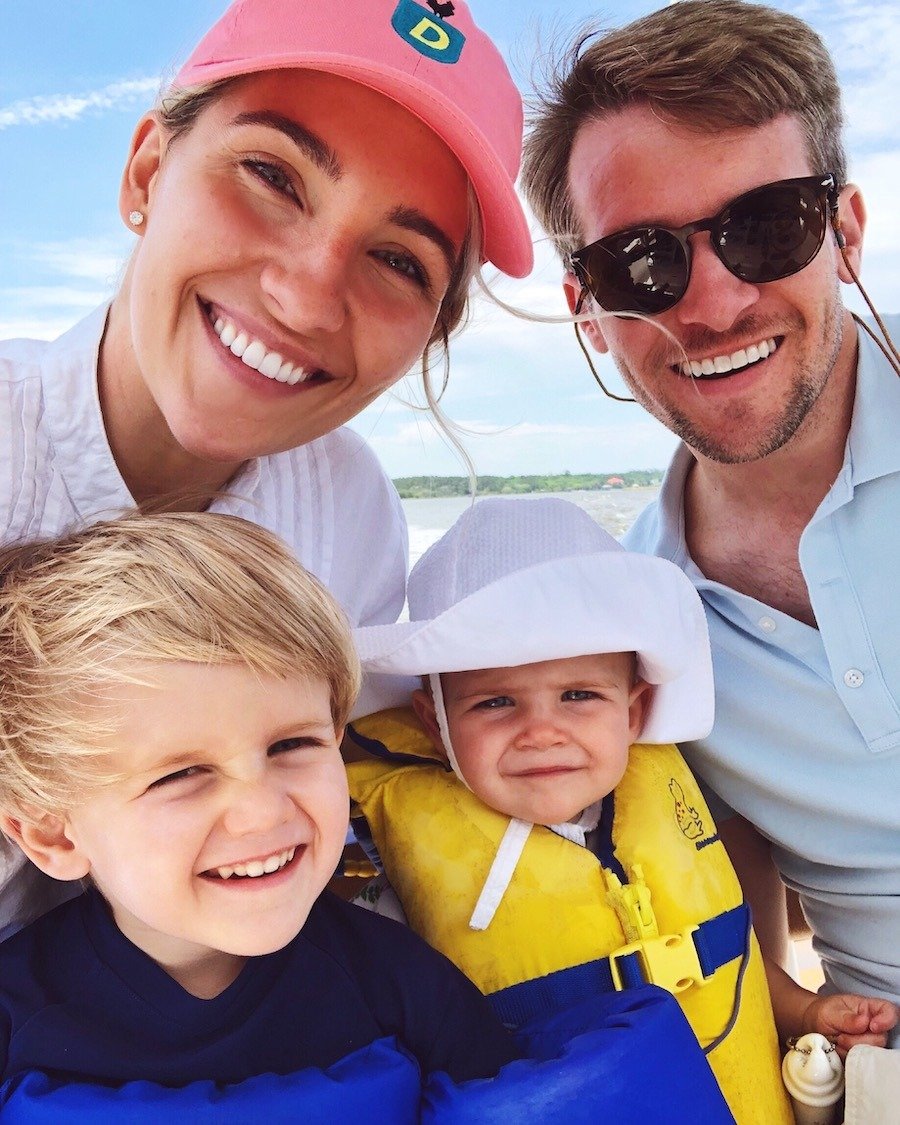 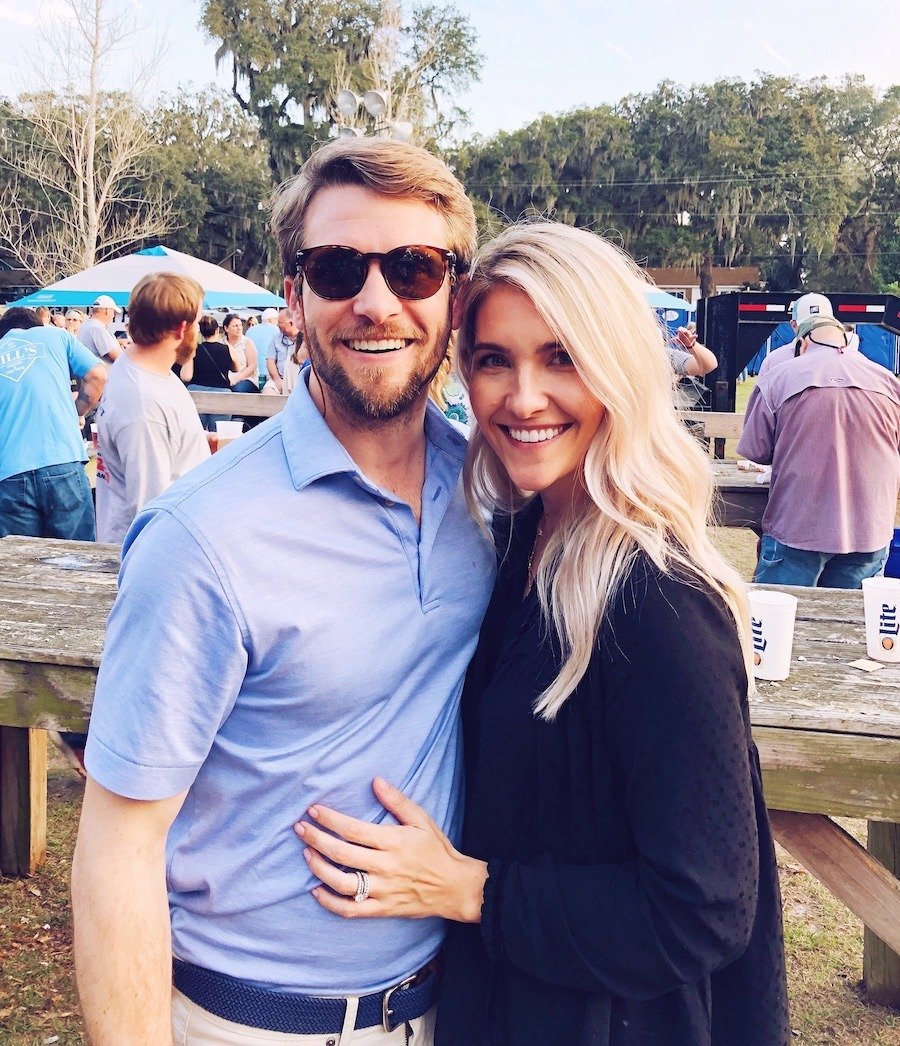 Just like I did, Brandon went to Dr. Tatum’s office periodically throughout his treatment to get a few new sets of trays at a time, which he wore for about a week each. He also used the “shaker” tool nightly, which I discussed in detail here, which helped speed the progress along. Here he is now and if you look closely, no more crowding, turning, and overlap of that tooth!

We ALL went a few times… it was clearly a family affair, haha. Good thing the appointments are quick. 🙂 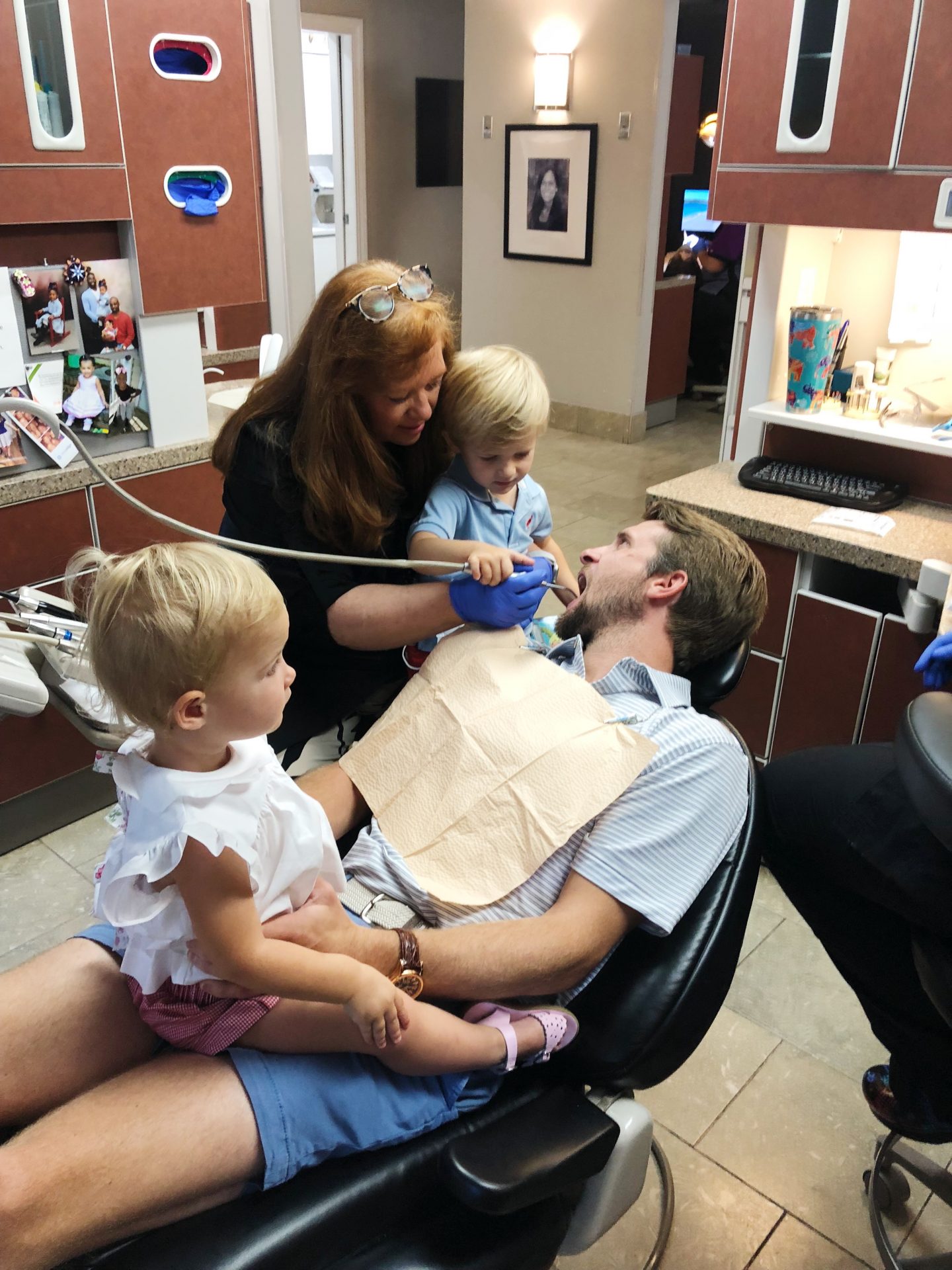 Here’s a picture “mid-Invisalign.” You’ll see Brandon was wearing his aligners in the photo—I mean, if you look super closely. They are nearly undetectable unless you are really staring at someone’s teeth. Here’s a little tip: I’ve found that the more someone wears the aligner trays, the less noticeable they are because they fit on the teeth like a glove. If a person doesn’t wear the aligners like they should, the aligners become ill-fitting and start to show a little extra clear space in between the bottom of the aligner and the start of the teeth. Not to mention, that means the teeth aren’t moving like they should. Brandon was so good about wearing his aligners almost all day long, so his always fit on his teeth perfectly. (He was a lot better than I was!) 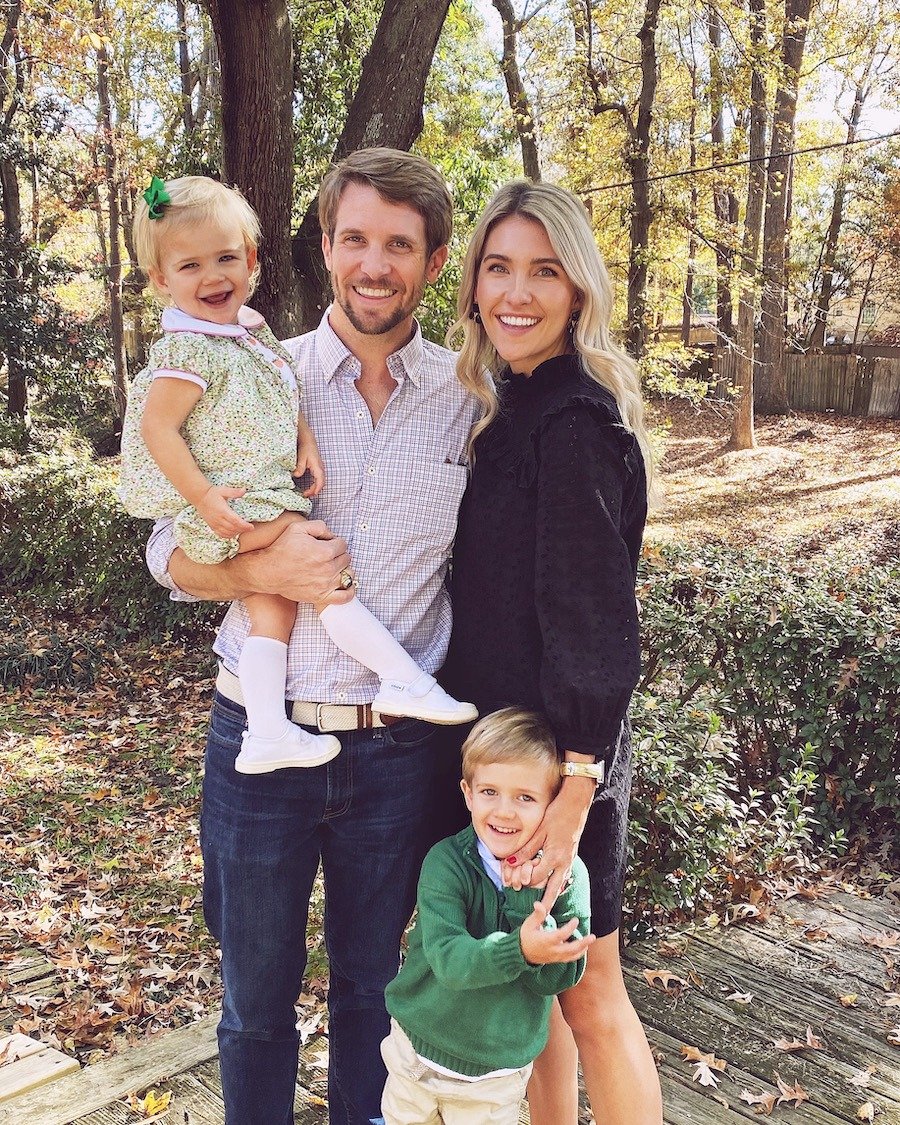 After about 10 trays or so, Brandon finished his treatment. He has now upgraded to the retainers, which he will wear all the time for 3-6 months (I did 3 months in mine!) and after that, wear them every night to sleep. The retainers look just like the clear aligners, by the way. 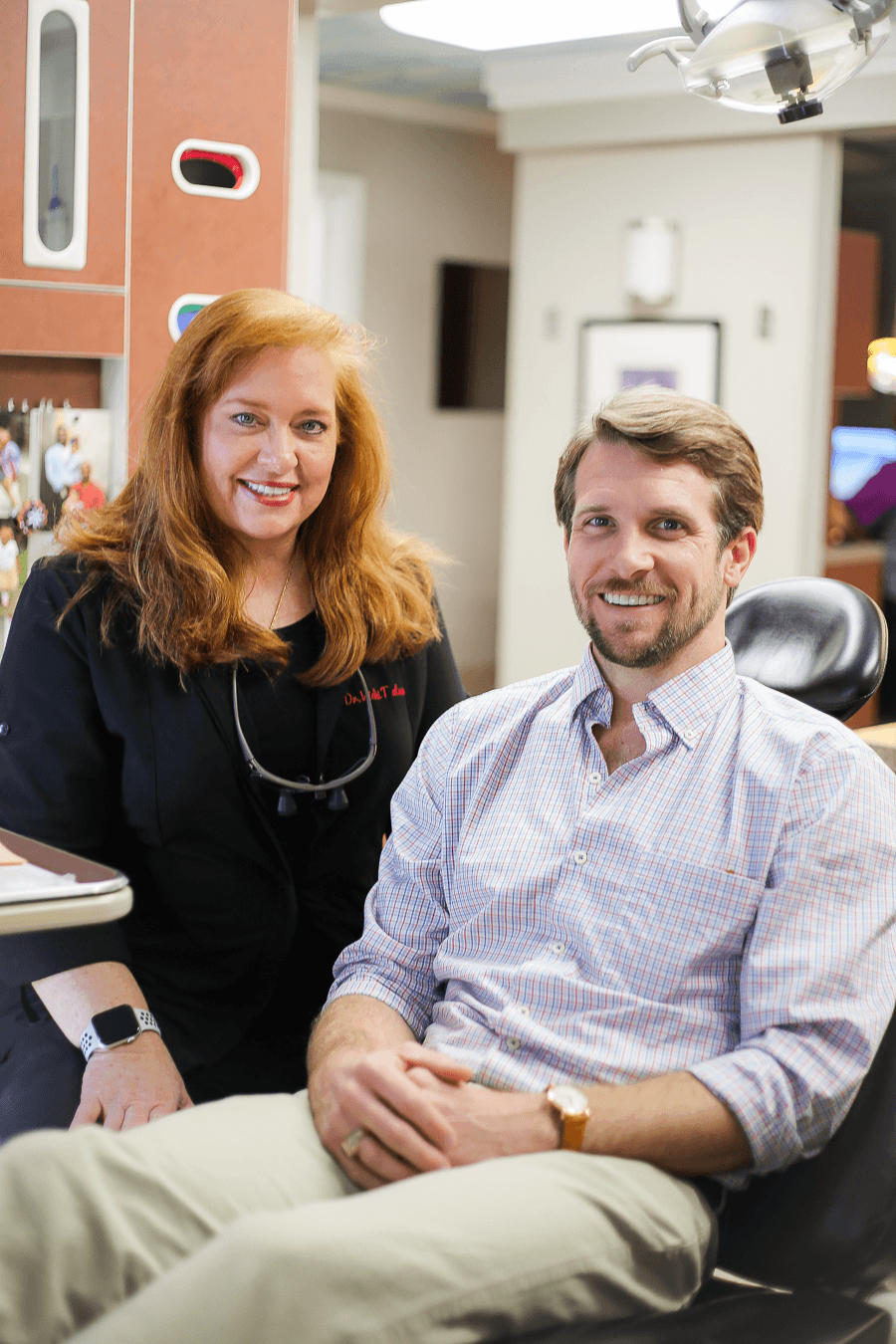 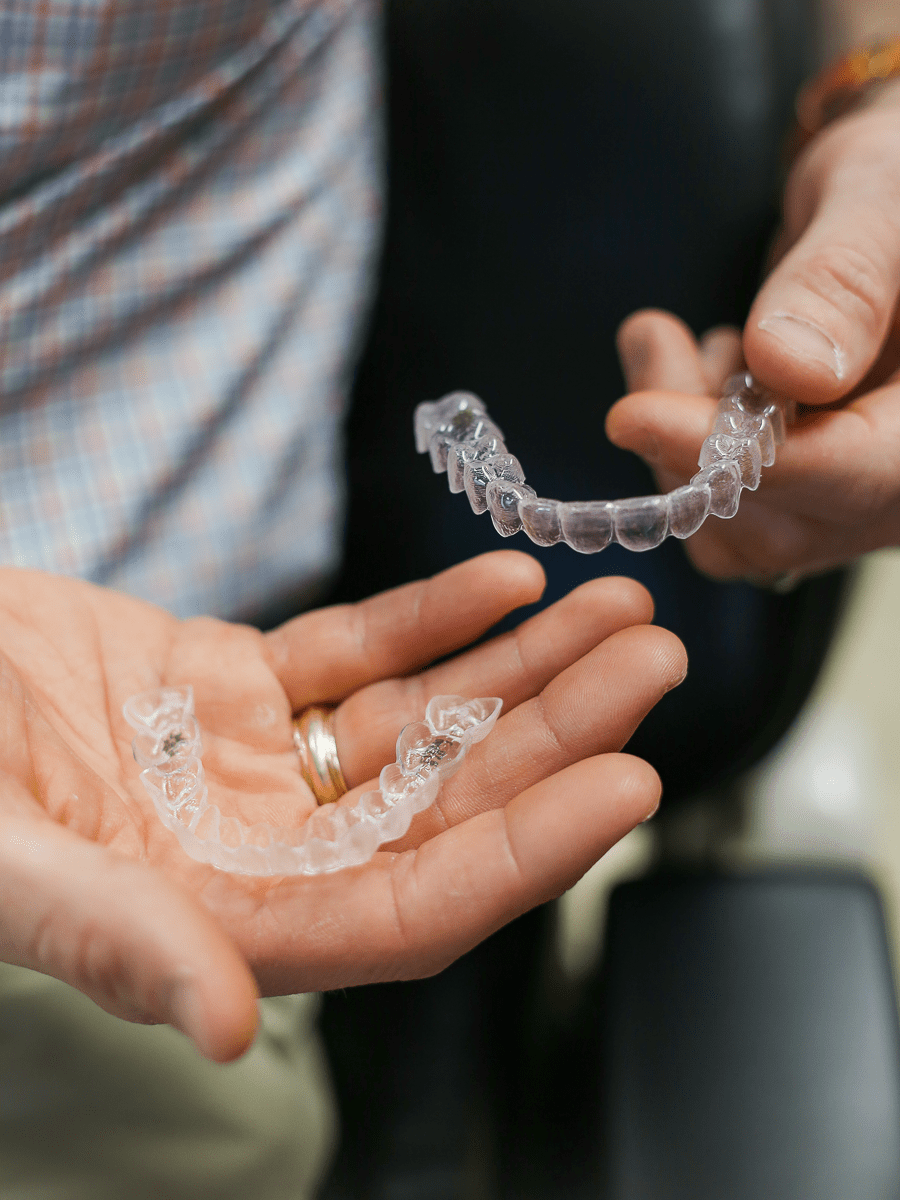 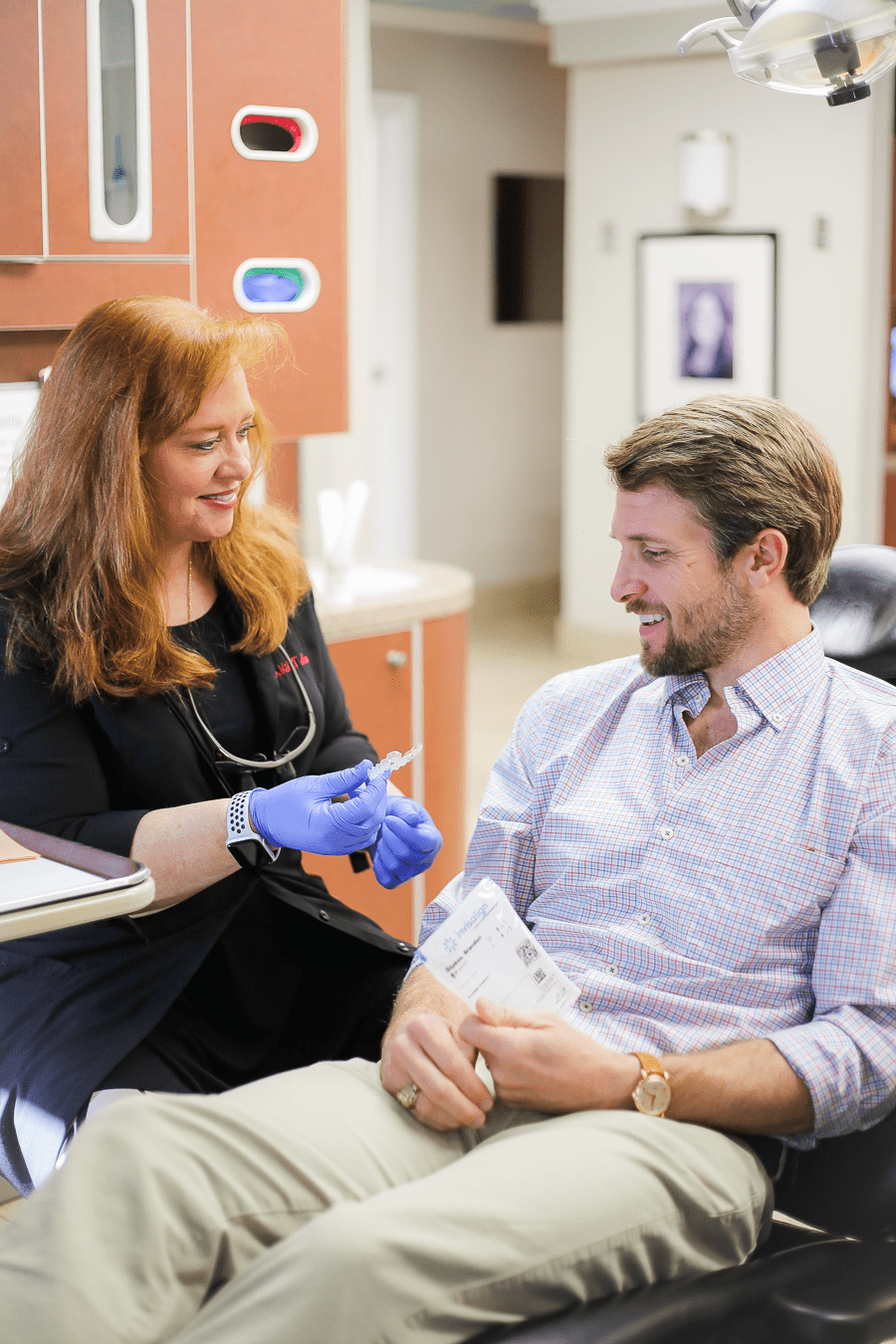 I’ve sung Dr. Tatum’s praises for the longest time, because after all, she did make my teeth go from this…. to this… in less than 9 months. Shown below! 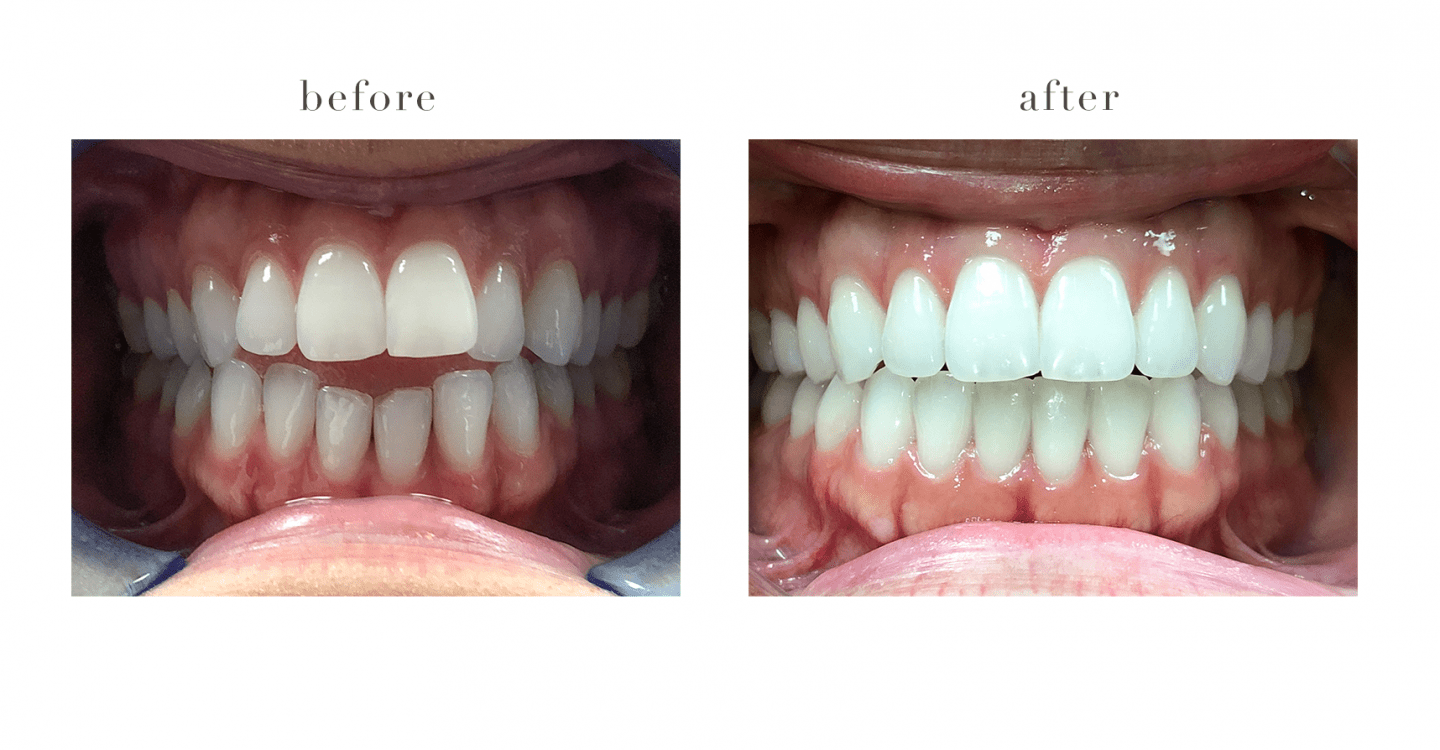 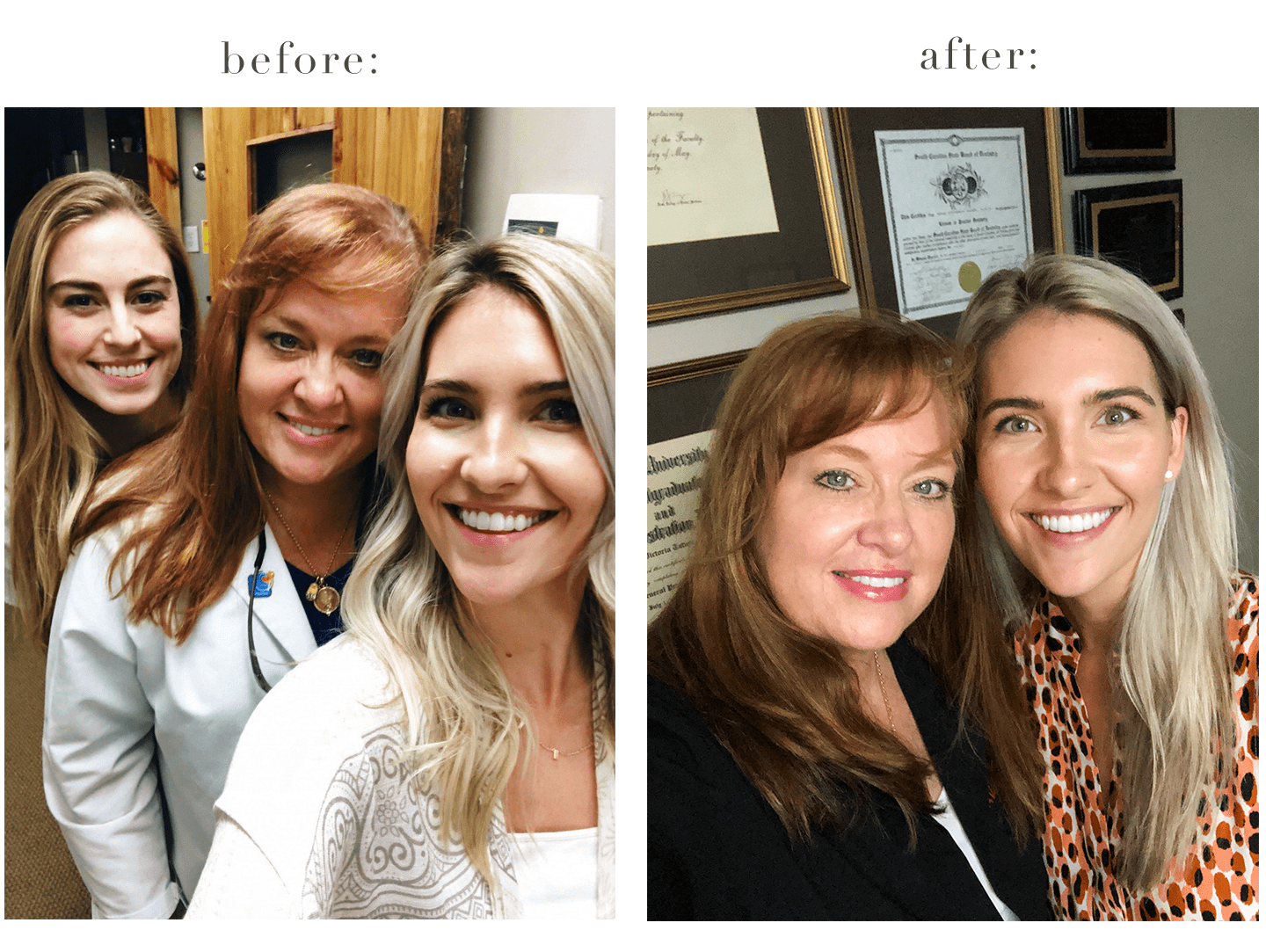 And I will be forever grateful for the invention of Invisalign, because I honestly don’t think I would have found the “right time” to go for conventional metal braces given the fact that my job requires my face to be so front and center all the time. Not that I wouldn’t have done it eventually because I know adults who have done metal braces and I think they look great. However, I just know that I personally would have struggled with the timing. Also, I learned that Invisalign is quicker than conventional braces. This process is THE BEST and I cannot suggest it enough. I know it’s an investment that not everyone can do, but if you are able to make it work through payments (pretty sure Dr. T does 0% financing), I think you’ll find it incredibly worth it.

If you’re in the Charleston area and are interested in a consultation where Dr. Tatum scans your mouth with a quick camera, pulls the images up on a super fancy screen and then in seconds, transforms your smile in an image and virtually shows what Invisalign will do for you in real time, you can check out their website right here and call their office for an appointment. I believe this is totally complimentary if she sees that you’re a candidate!