Our New Home Build
our house is gone!

I’ve got a house update for you! This has been a long time coming since it has been almost a year since we bought this home below. Throughout the past year, we have been busy

I’ve got a house update for you! This has been a long time coming since it has been almost a year since we bought this home below. Throughout the past year, we have been busy almost daily with surveys, architectural planning meetings, board approvals, meetings with the town, engineering cycles, contracting logistics, permitting, and so on. The list feels almost endless! I feel silly now because I thought we would be living in this house by now, but I just had no earthly idea how long the process can be to build a home.

Today’s update is a big one because… 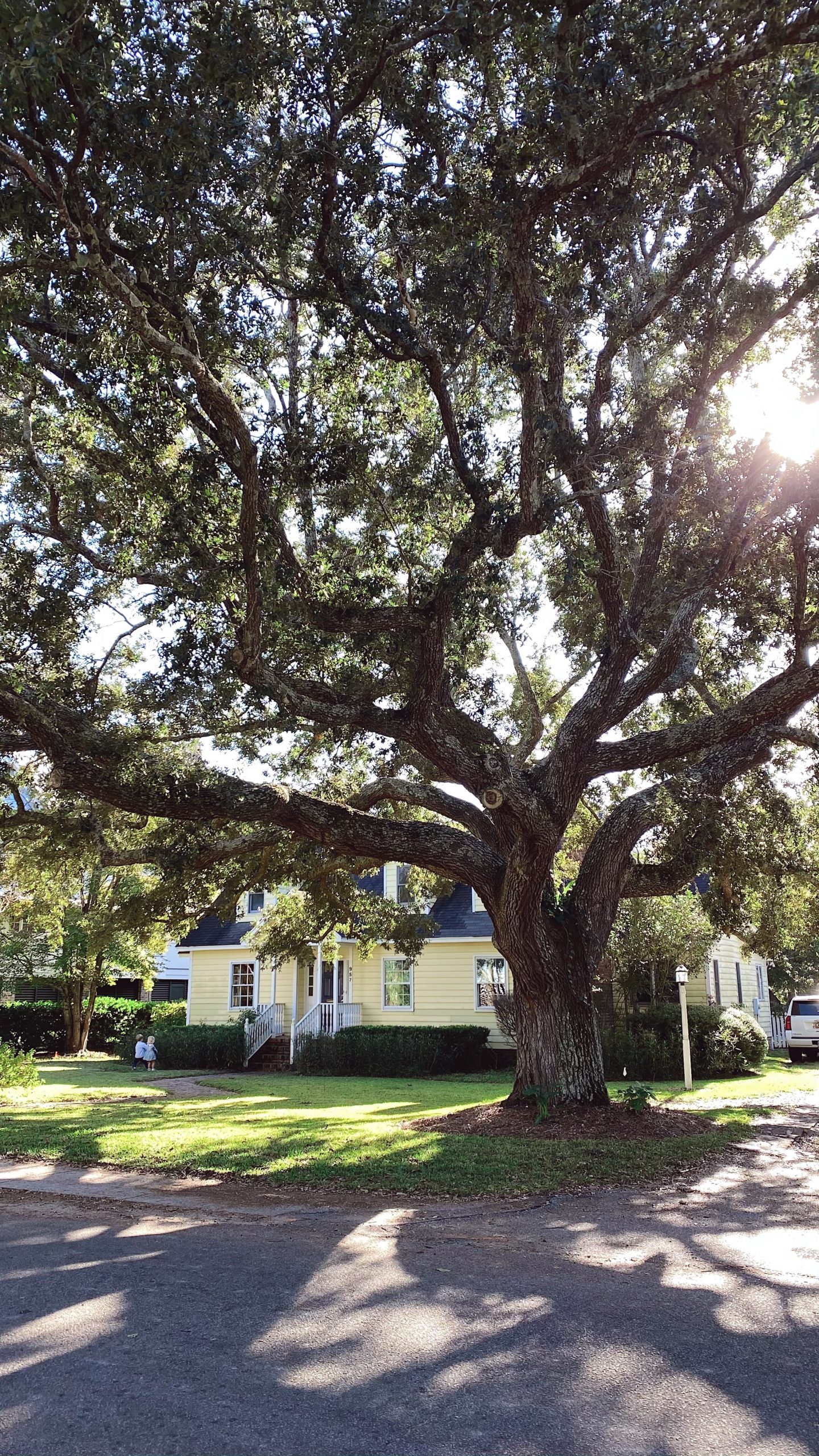 This sweet home is no longer there!

It’s a bittersweet reality, but a decision that was ultimately made for us. I explained here initially, but basically…. we bought this home sight unseen because the market moves so quickly in this neighborhood & it’s where we want to raise our family. The house sits on a double lot, which appealed to us greatly, and was being sold as a tear down. However, we had the highest hopes in saving it. I actually even submitted a letter with our offer to buy it, stating that we wanted to do all we could to save this house. We consulted with architects, contractors, and engineers prior to closing on the house to make sure it could be done. But ultimately, about six months into the planning process—once we had architectural renderings of the remodeled home, we found out that it would be a much more expensive, lengthy, and complicated process to remodel the house than to just demolish it and start fresh with a new home build. Not only that, but we found out that parts of the pier/beam foundation were eaten up by termites, and so was a big part of the subfloor. You could literally walk in certain parts of the house and feel the floor go down when you’d walk on it from termite damage! In addition, the foundation was built incorrectly, many parts of the interior weren’t up to code, and the actual house would have to be raised about 8ft into the air to be flood compliant. The house even flooded back in Hurricane Hugo and I’m pretty sure there had been a fire in the attic! And that’s just from what we knew at first glance… I’m sure there would have been countless other surprises along the way. Since this would be a pretty massive renovation and no small expense, we just wanted to make sure we were making the smartest choice for our family. It was pretty evident that doing a tear down was the answer we were looking for. I think the final deciding factor was when we had a company come in who specializes in restoring old homes and even they said, “Yeah. You need to tear this down.” The historic preservation board within the neighborhood advised for us to demolish it as well. So?

With that said, before we demolished the house, we had a nonprofit come in called Sustainable Warehouse, who spent a couple of weeks taking anything that had value—moldings, fireplace mantels, cabinetry, lighting, flooring, and so forth. Once they had everything that could be reused, down it went. 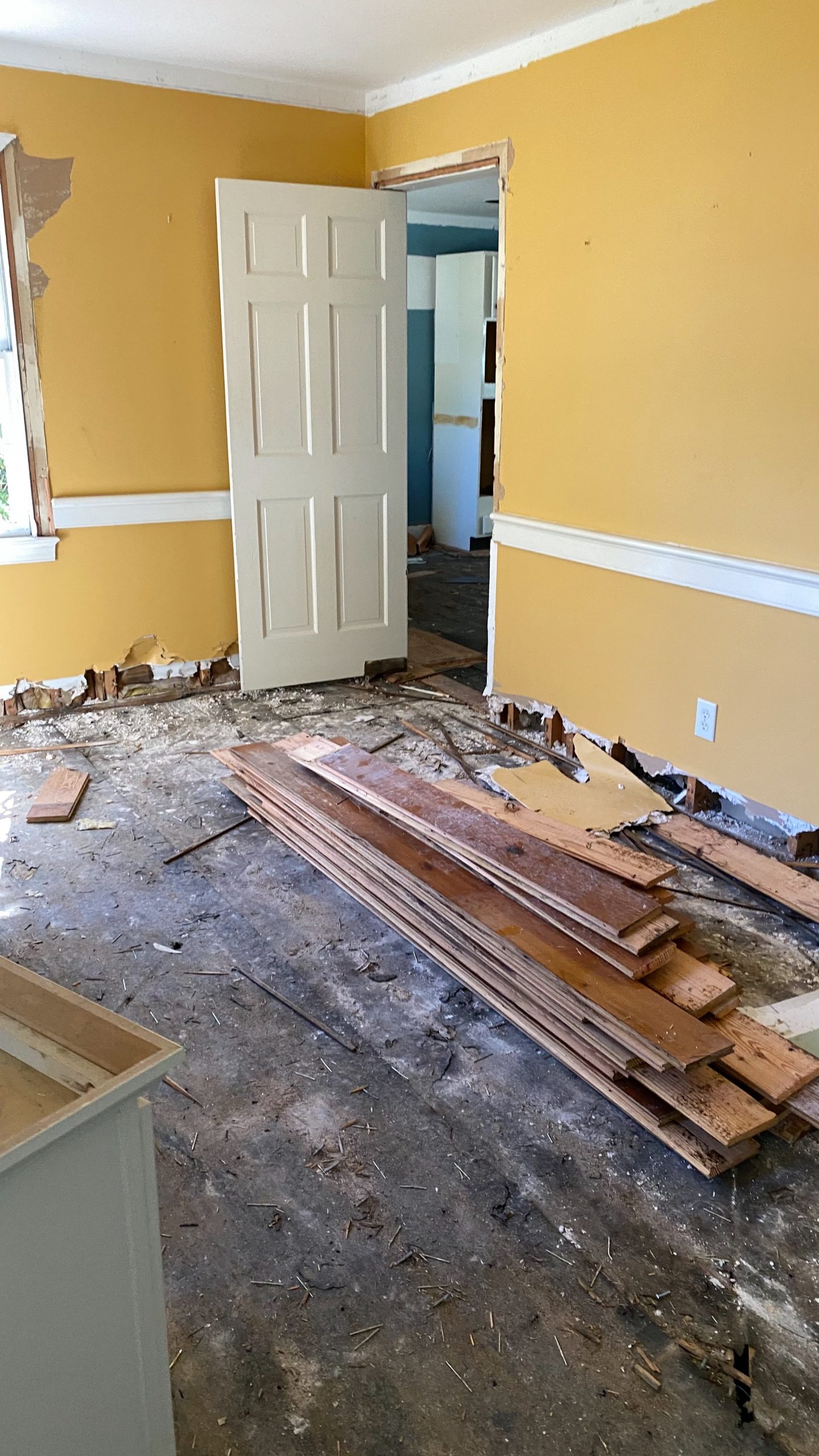 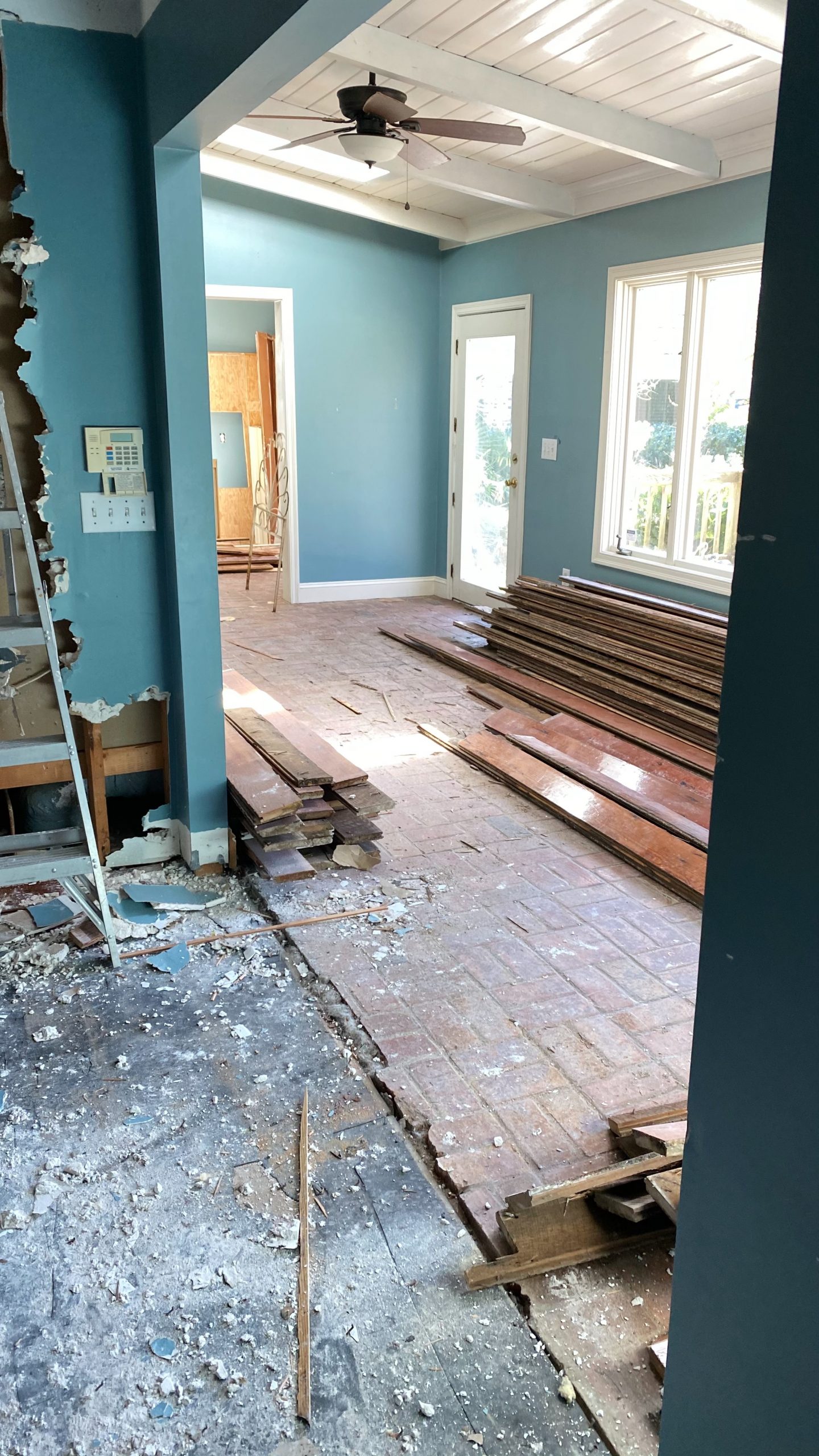 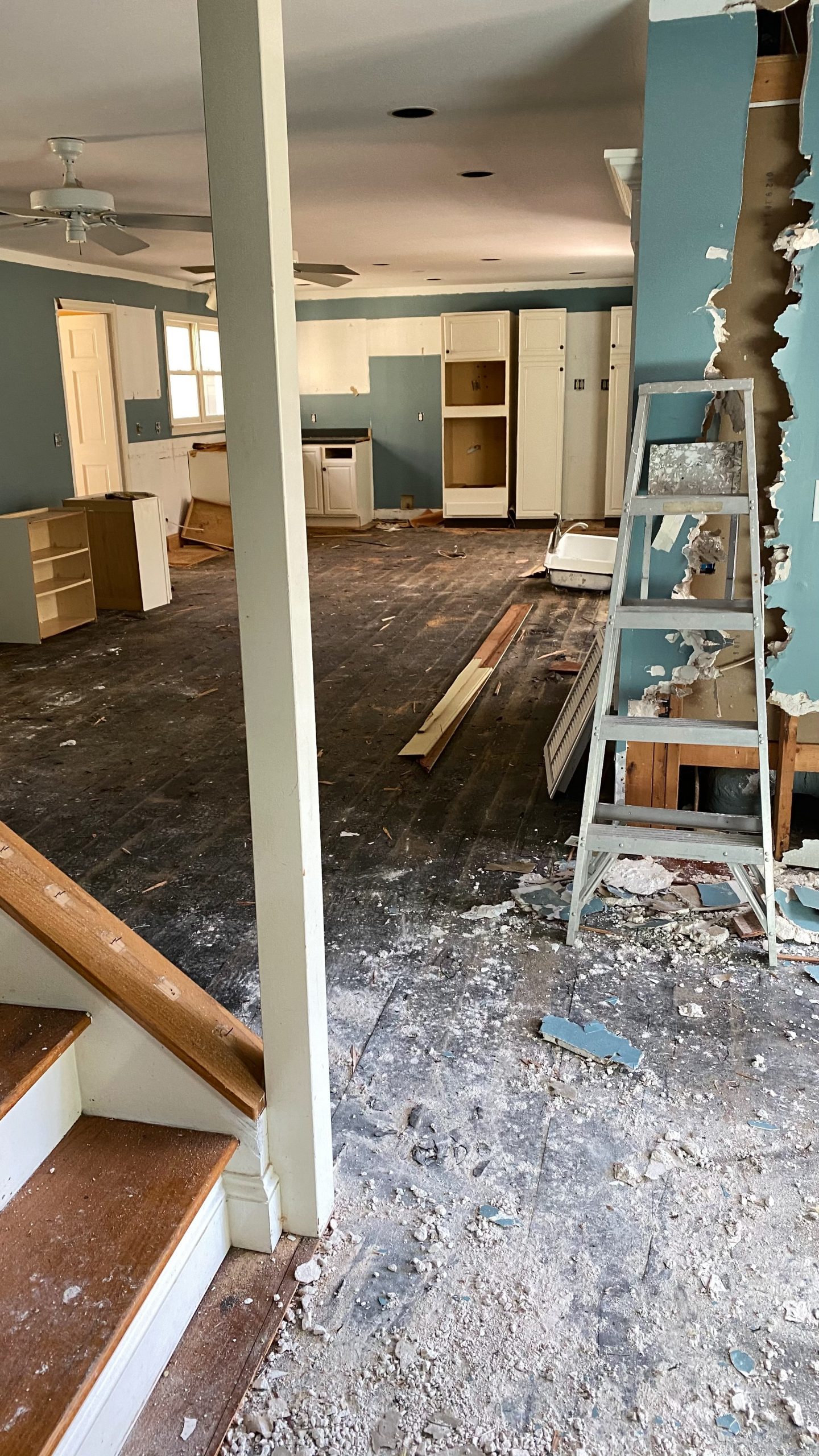 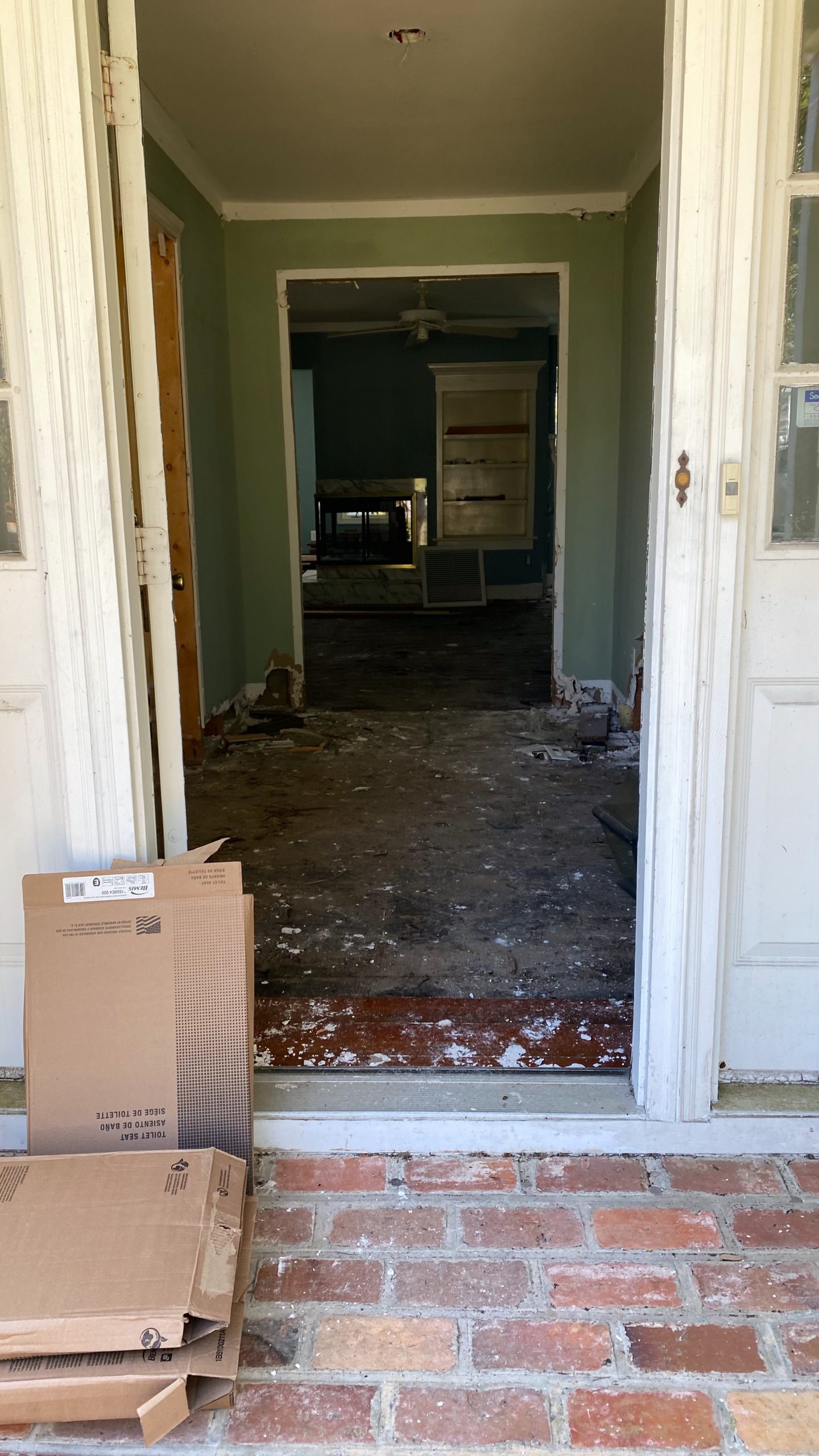 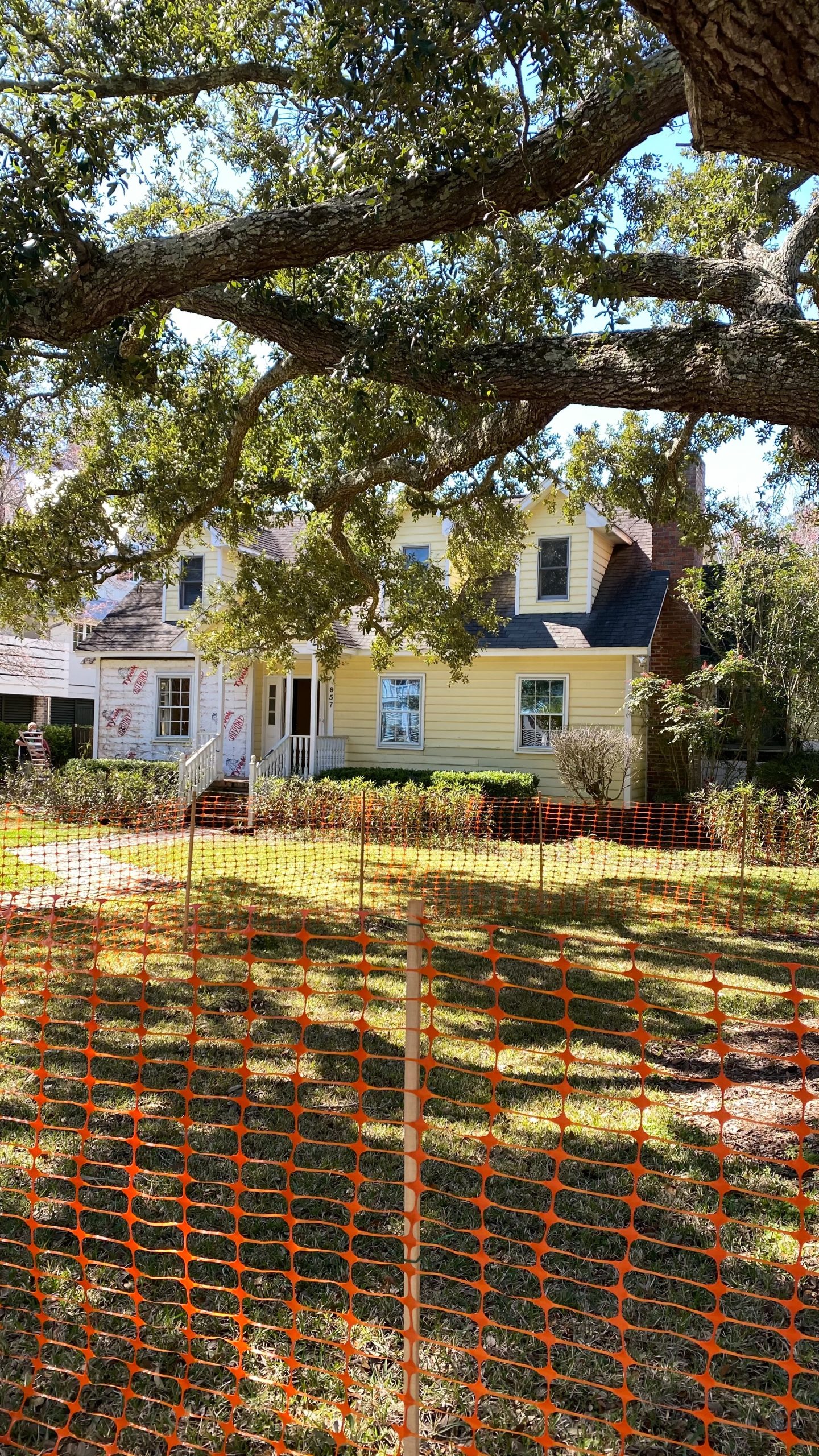 The front of the home had the most beautiful reclaimed heart of pine wood floors, so Brandon and I actually took those to be used somewhere in our new house. Maybe on a ceiling, maybe as a fireplace surround… somewhere! 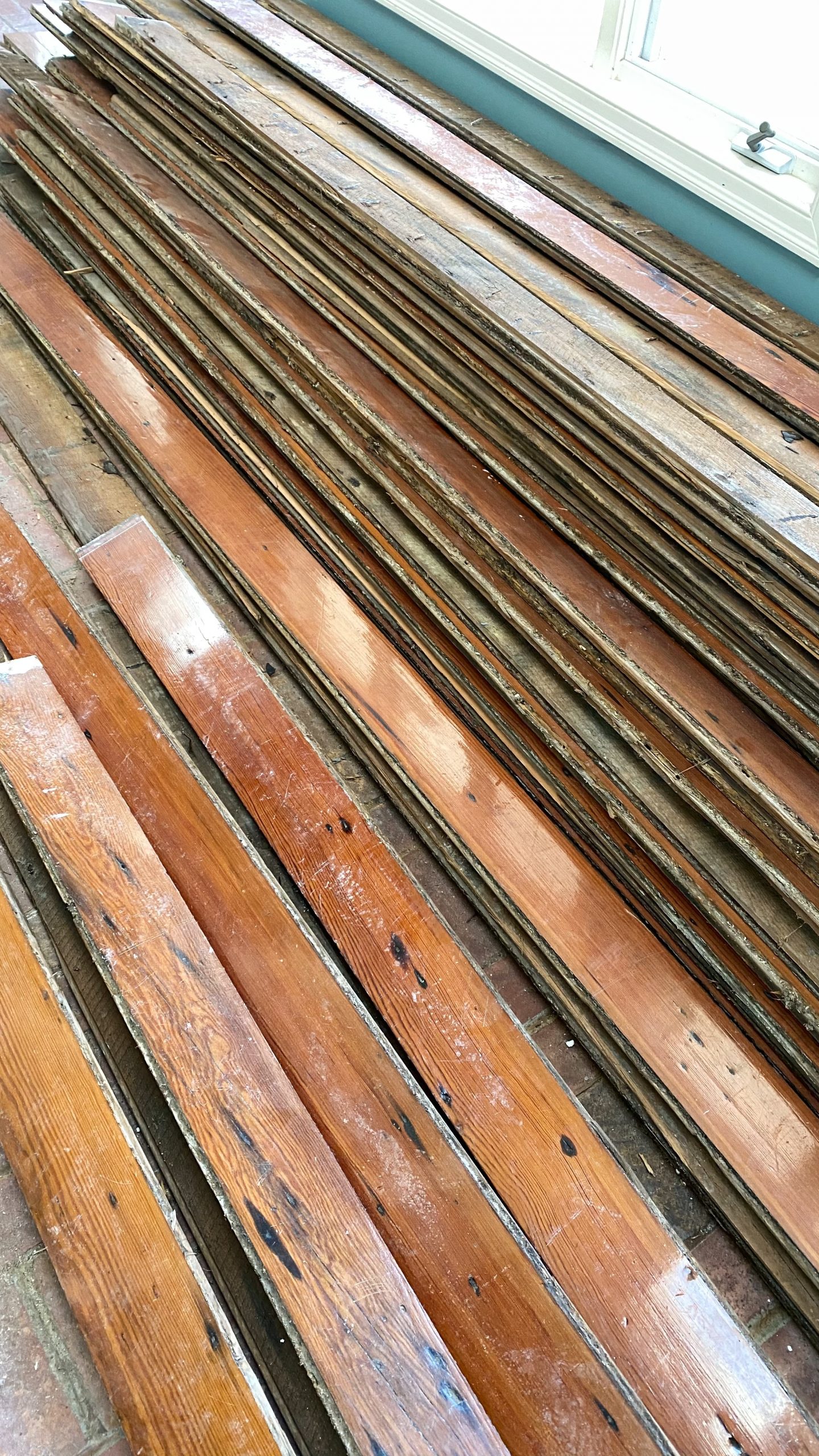 This is just a fraction of them! Some are about 16 feet long, so they make that trailer look teeny tiny. Luckily, we didn’t have too far to go to where we are storing them. 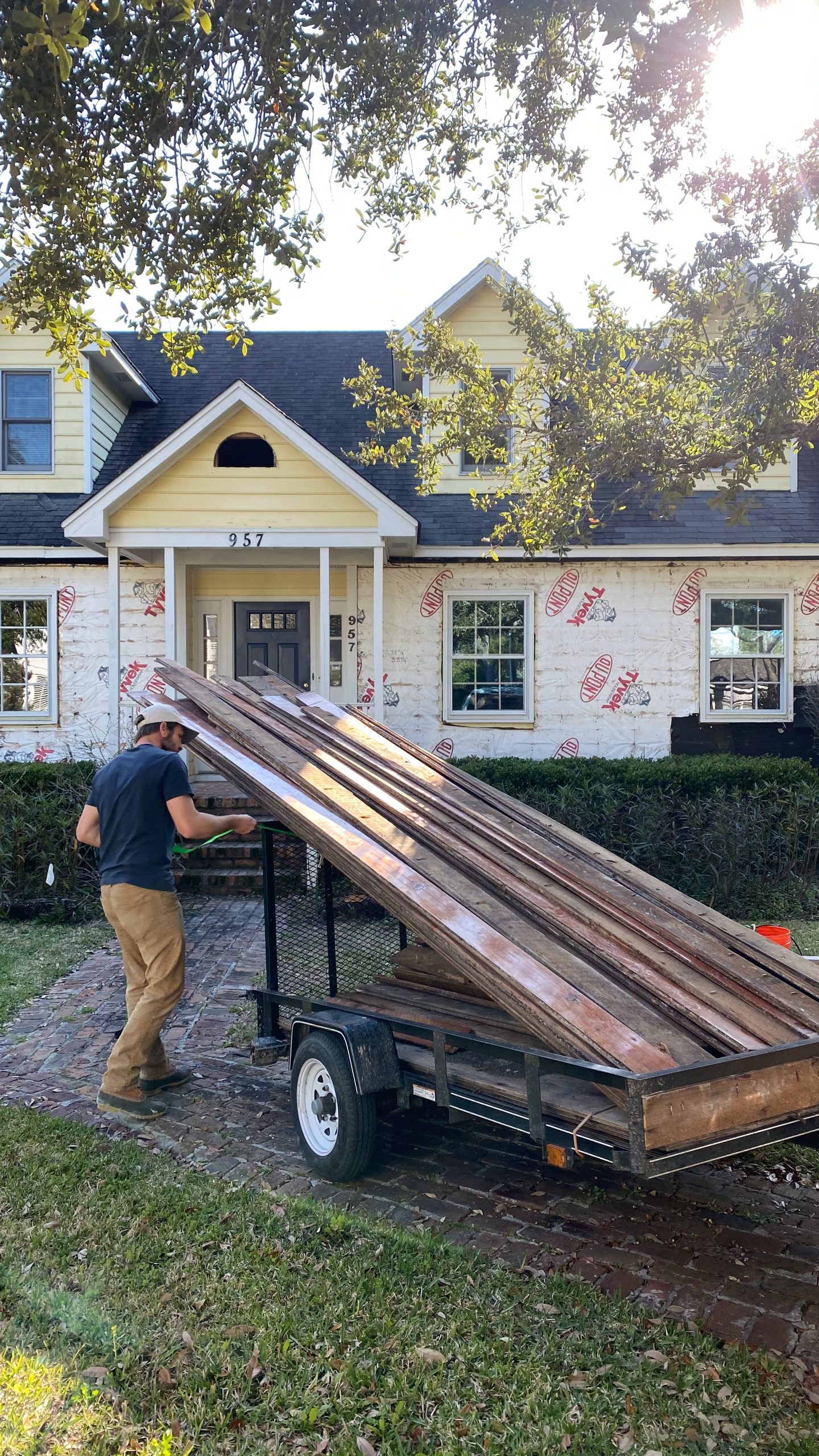 Oh and don’t worry… I was able to salvage a few sheets of this 1970s wallpaper, which I plan to frame one way or another.

It’s extremely emotional watching a house come down. I know it was a home to many people and holds many stories. So let me tell you, it’s very humbling to be the one to consciously tear it down and witness the machines come in to make it happen. But considering what we were up against, we had to look at it as though we are making room for our own memories to take place. It does make me happy that the valuable structural and cosmetic components of the house were salvaged and will be used to help families in need. 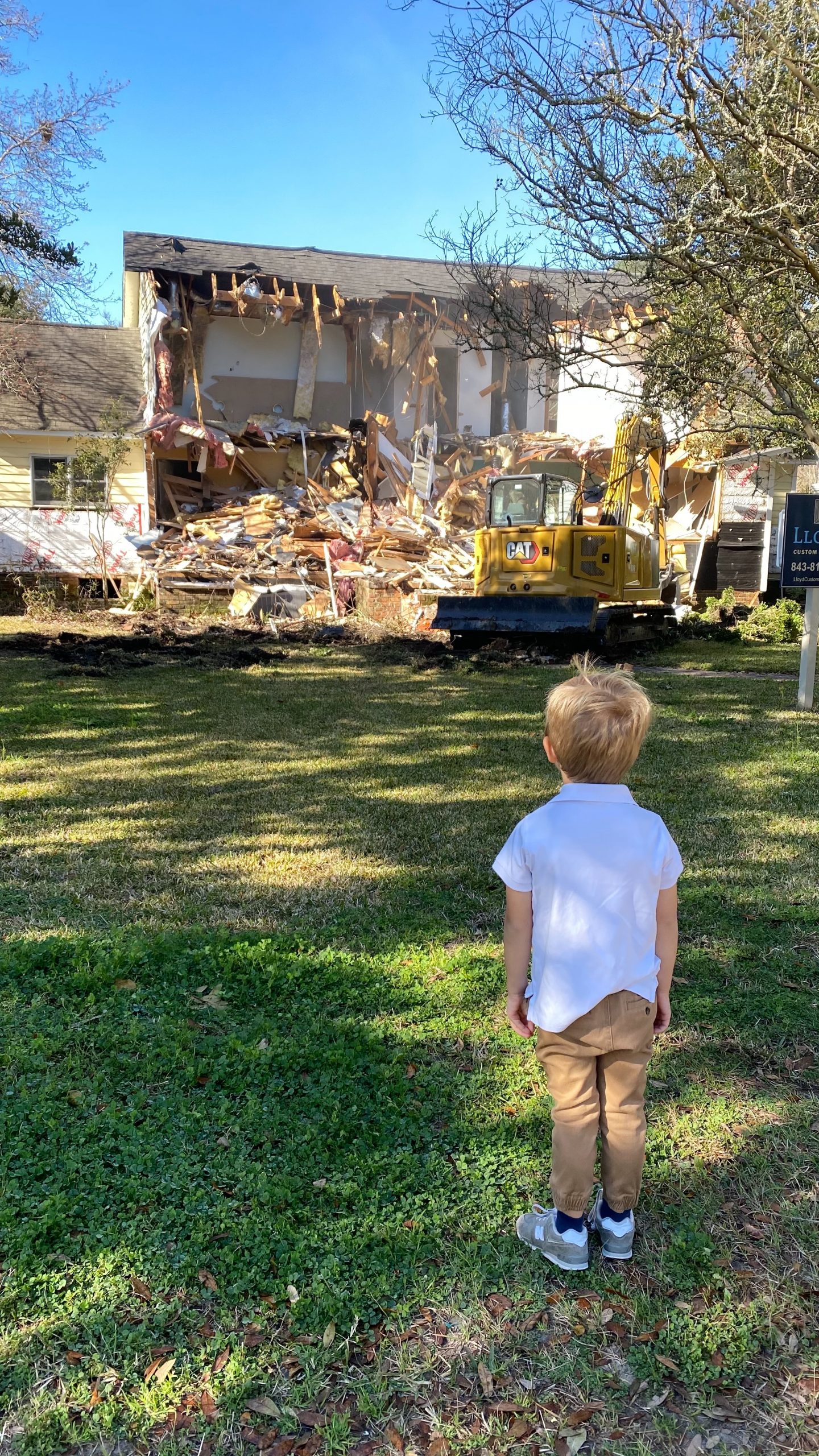 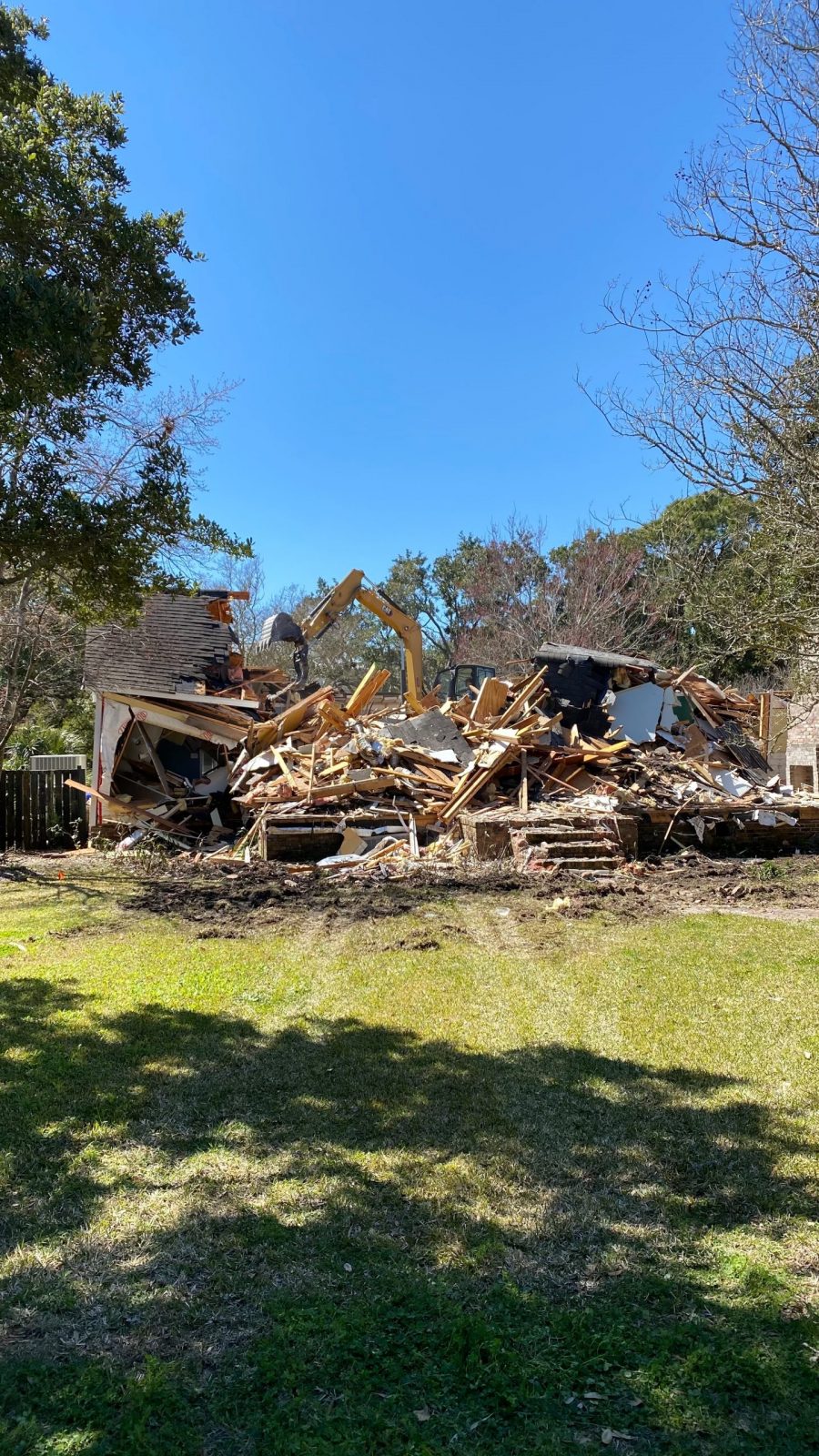 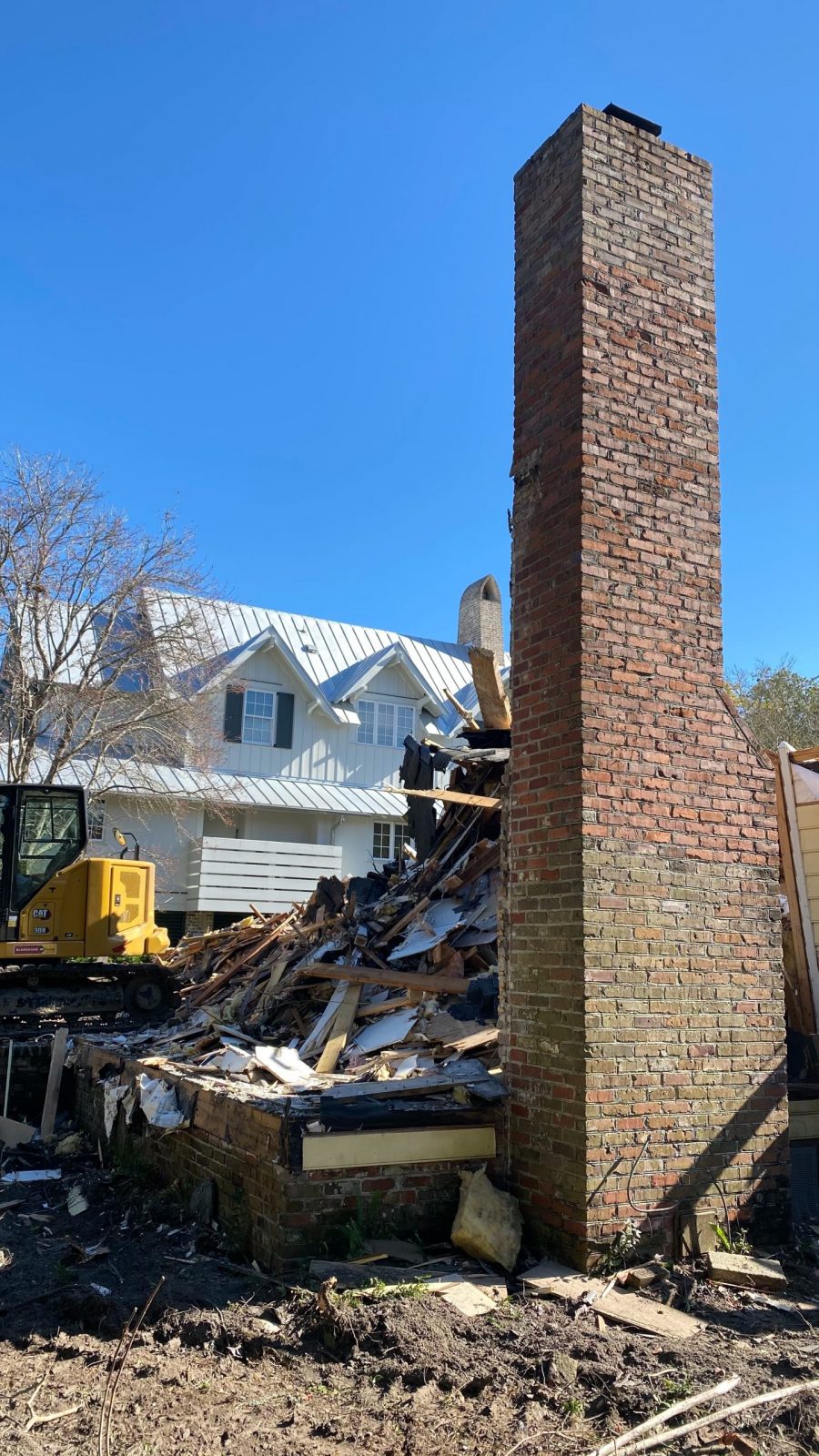 And where does this leave us now? With a clean slate!

Don’t worry… all of the trees are still there. You can see the metal fencing surrounding the large grand oak at the way end of the back yard. The oak in the front is still there too, but this was taken at different angle where you can’t see it. Brandon also went out there and dug up about 100 plants out of the yard, which we have planted and or potted at our rental home so that we can then use them once the new home is built. We tried to be as conscious as possible about saving anything we could!

What’s next? We got our building permit a couple weeks ago, so the foundation will be the next task at hand.

When I post again (very soon!), I’ll share a rendering of our home and some images that are inspiring me for the interior and exterior!

Feel free to follow along on our home building journey here.