Fashion
updates we’ve made to our rental home

We left the country in early 2021 with no real idea of when or where we would return. We sold our current home, knowing we would need to live somewhere closer to the home we

We left the country in early 2021 with no real idea of when or where we would return. We sold our current home, knowing we would need to live somewhere closer to the home we are building so that we could pop by the construction site as needed throughout the day. Of course, I never once assumed we wouldn’t be able to find a rental right away! I should have realized this, but as it turns out, the rental market is nuts in Charleston. It always is, but it got even worse throughout the pandemic, as Charleston has become a hot spot for people escaping bigger cities. So when we couldn’t find a rental in the locations we were open to, we put all of our belongings in pod storage and went on an adventure! Luckily, while we were there, a rental home came on the market and since we were scouring the MLS at least 8 times daily, we were able to catch it within minutes. Needless to say, we locked it in, sight unseen. Weeks later, we arrived back into the US around 10pm and the very next morning at 8am, had the movers meet us at the rental to unload our pod containers and see the house for the first time.

So that’s how we ended up here!

This beachy rental has been such a blessing to us and honestly, it has changed parts of me for the better. I’ll go into that some other time. While the house itself isn’t necessarily a showpiece, living a few blocks from the beach has offered us incredible memories—and living just a few minutes from our new house construction has been a huge help.

Here are some really great memories we’ve had so far in this house.

As much as we love living here, the house has definitely has taken a few adjustments to feel more like home! I mean, that’s expected when moving in anywhere, right? I’m so afraid to say anything negative about the house, because we absolutely have loved it and I don’t want to sound ungrateful in the least for things not being just “so.” But beyond the little expected nuances of moving into a rental, our furniture didn’t quite fit into this home as it did the one we sold and we knew we had some paint and hardware changes we wanted to do, with permission.

With that said, I’ve been asked to share everything we did to the house to put our own “stamp” on this house, so today I’m going to share all of that!

Just a little note to preface this post… All of these pictures are quick iPhone snaps. So rather than my usual style of home posts, these pictures are pretty imperfect, but I was eager to share something and feared I wouldn’t ever style the house to take high quality photos! With my Type A personality, this is quite the leap for me to share!! But on the token of updating my blog more and not waiting for everything to be perfect… here you go. 🙂 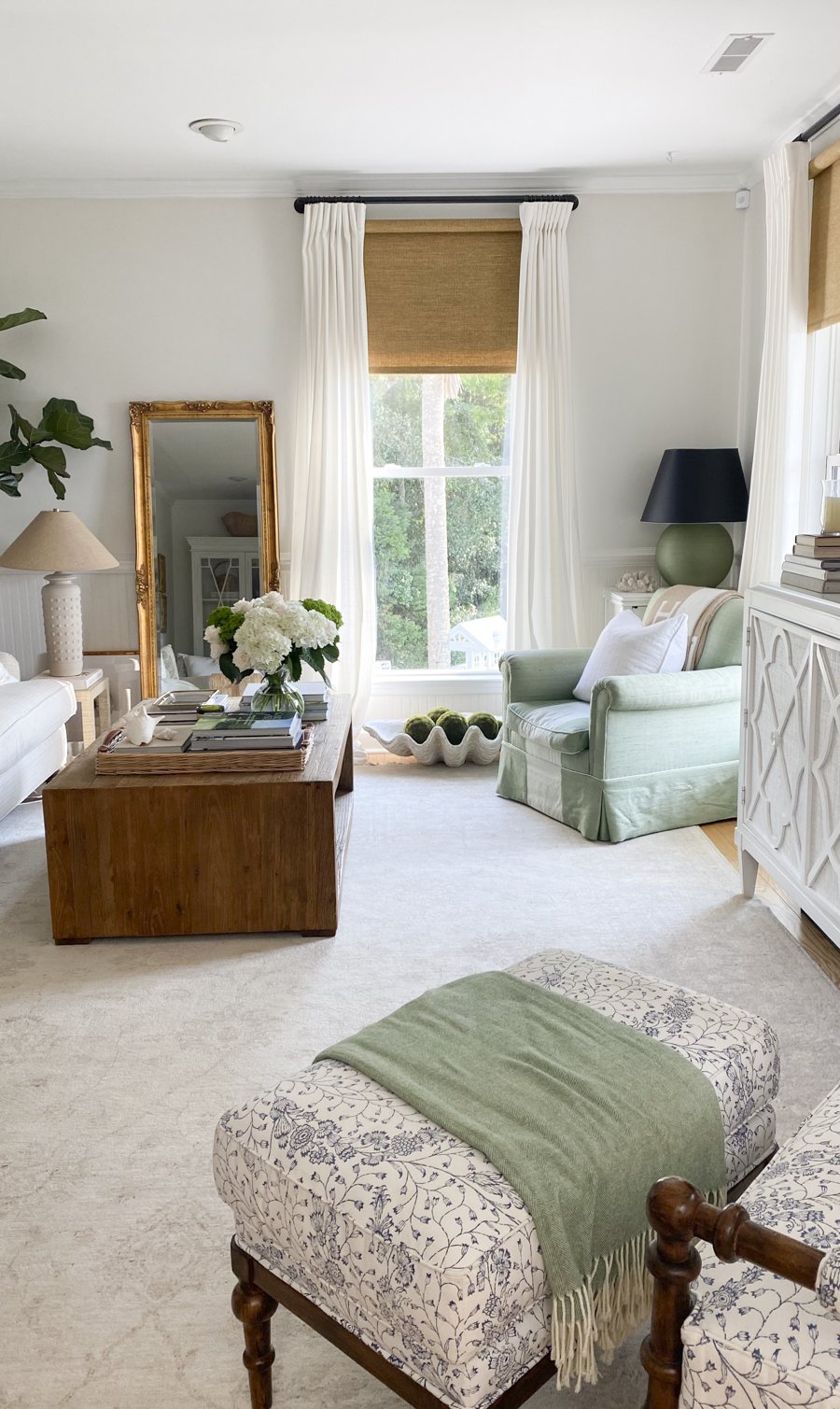 Let’s rewind back to January.  Oh yes, move in day. Actually, this picture below was taken four days after move in, once we finally dug into the boxes.  The day after we moved in, we scooted off to Georgia so that I could present at the Southern C Summit! Let’s just say that whole week was a daze. But we came home and got to unpacking! 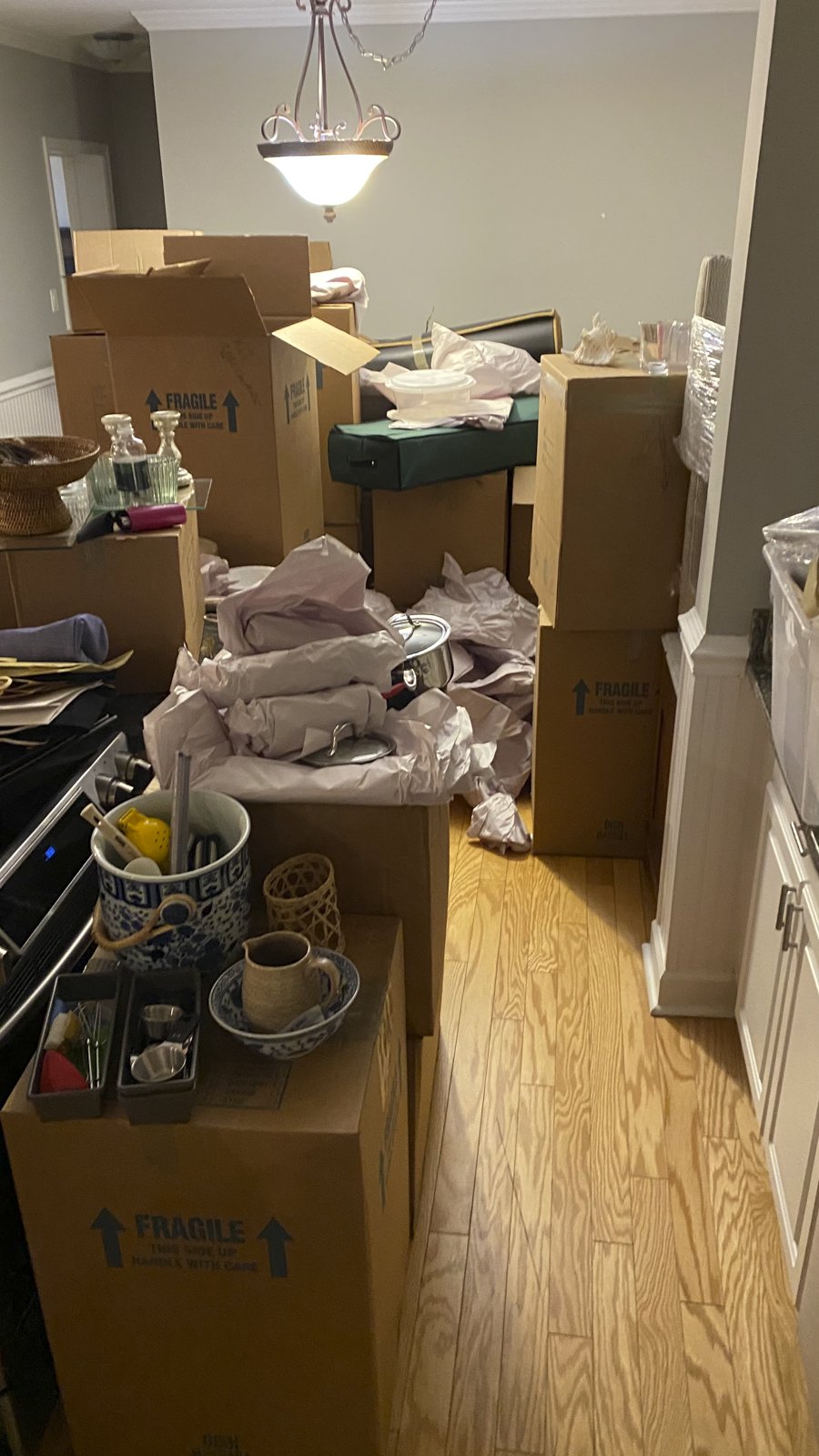 We got our furniture in place, then decided to paint the walls (with permission)! Below is the existing paint at move in. The gray was nice, but we have been used to a much lighter color, so in a way, taking the plunge to have the entire interior painted made the house feel more like home, so it was well worth it. I’m not sure what gray it is that was currently on the walls… I’m sorry!! 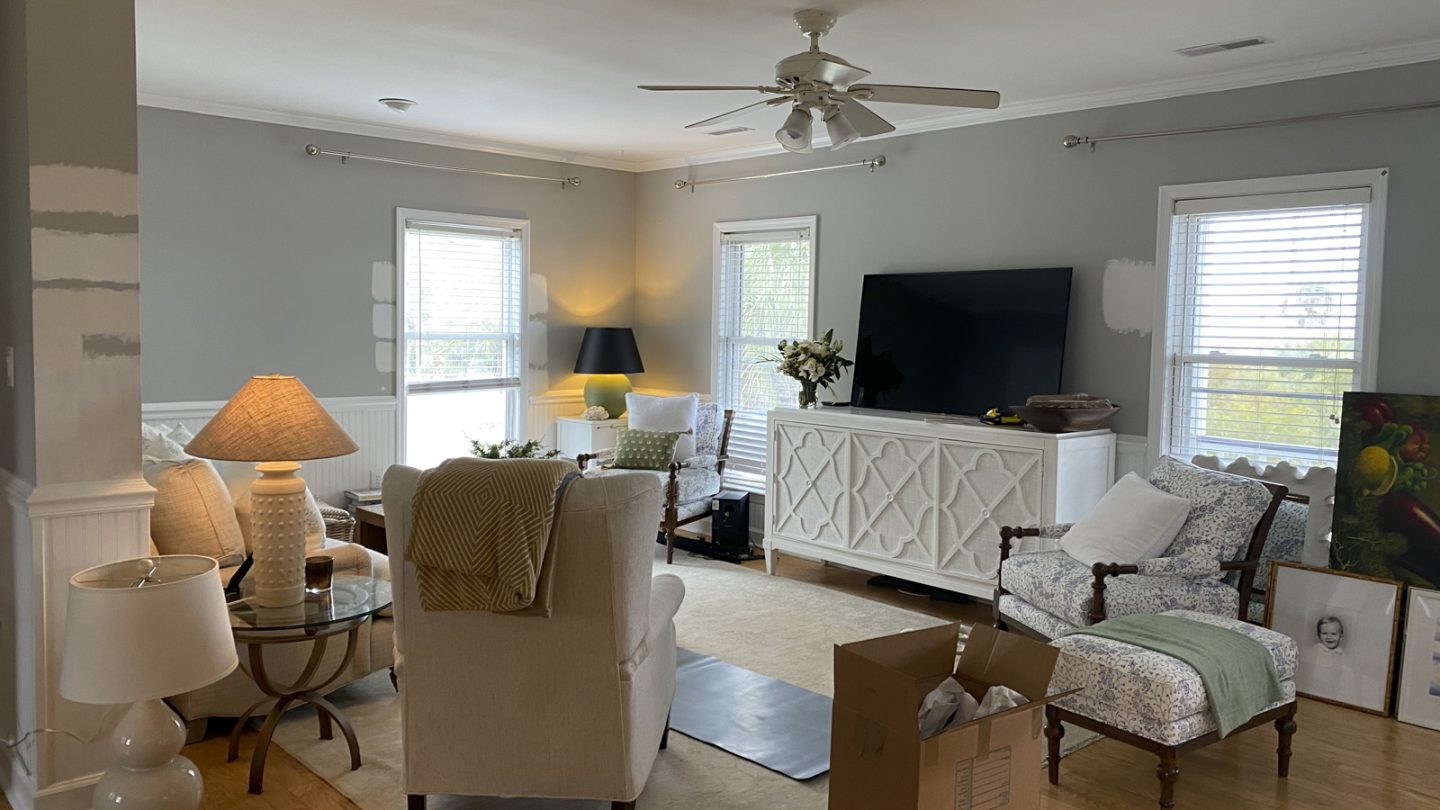 And then after the paint! This is Sherwin Williams Pearly White at 75% strength. I love it because it’s white and fresh, but not stark at all. It has warmth to it without being yellowish at all! 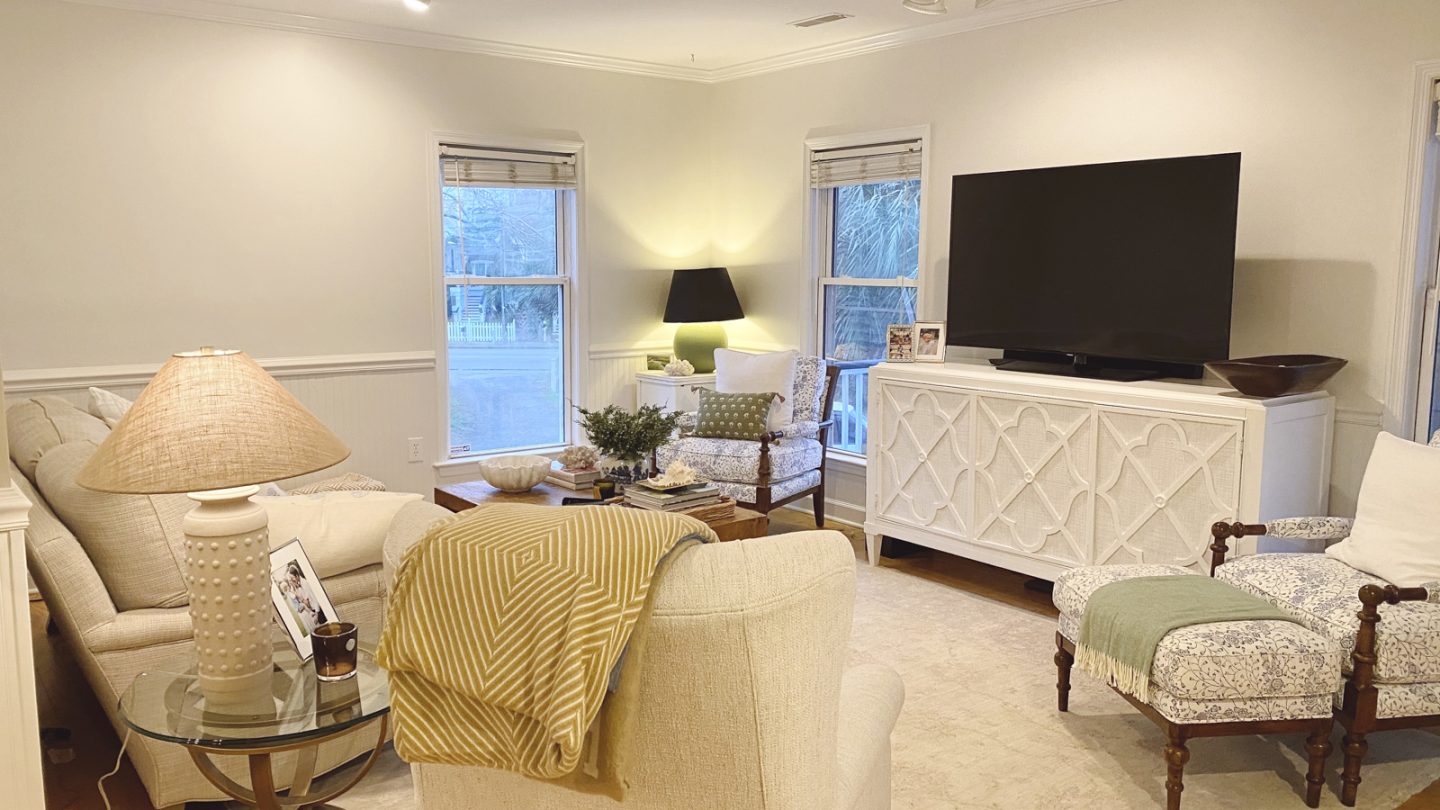 The next thing that was very much needed on my quest to make a rental feel like home was curtains. I didn’t want to spend much since the ceiling heights are different than what we will likely use in our new house—and wow, drapery can add up very quickly! So I bought the IKEA Ritva Drapery and then the rings and hardware from amazon. Everything is linked here and a tutorial can be found in my IG stories here! Overall, I couldn’t be more pleased with how it all turned out. The drapes aren’t the perfect length, but honestly I don’t care. I’d rather them drape on the ground just slightly than be too short. And the ring feature on the drapes looks so high end!

In case you didn’t know… curtains are the #1 way to make a window look larger. I mean, look how much larger the window that has curtains around it looks than the others! And we aren’t finished with each window yet. 🙂 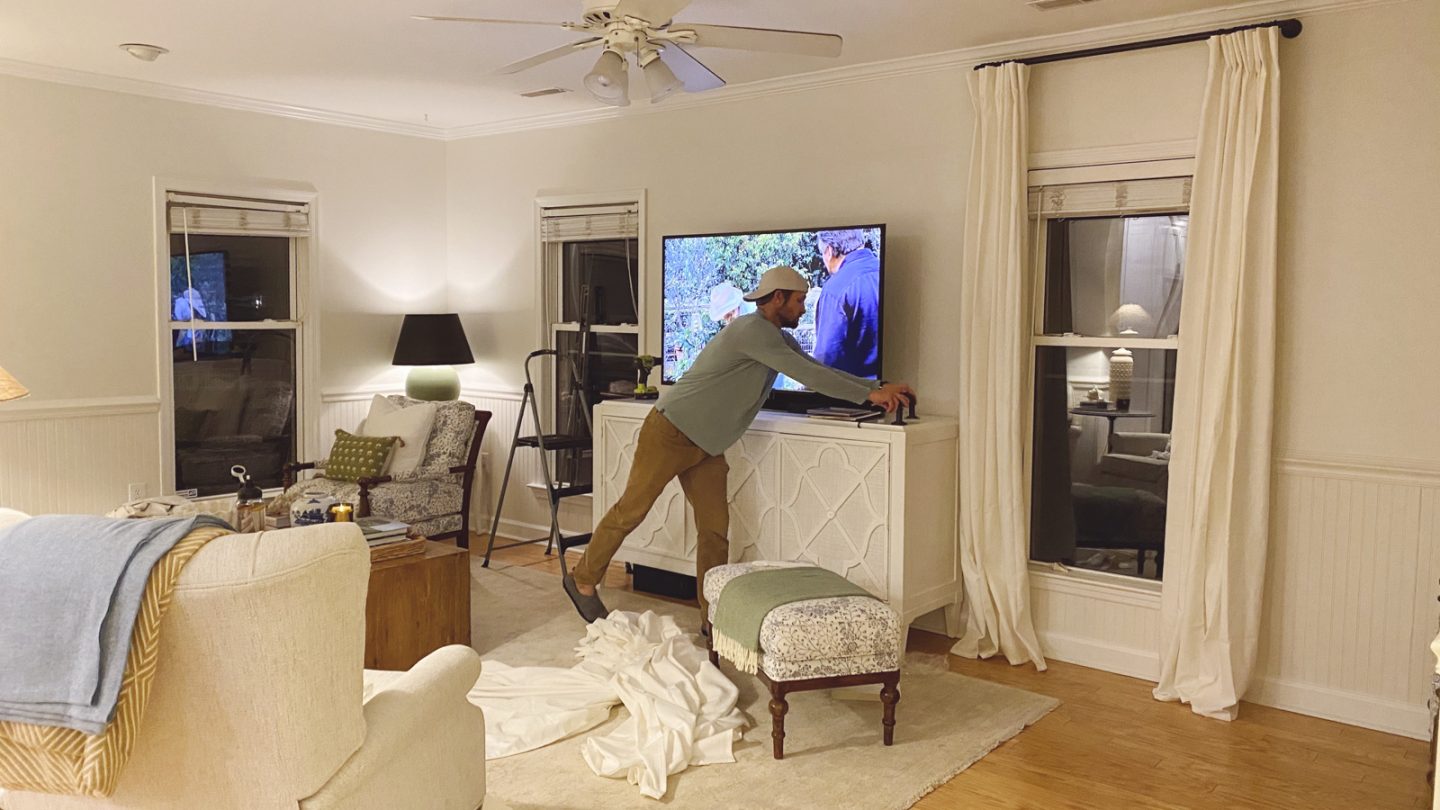 We also removed the fan and added a simple light fixture I found on Amazon for about $120. This is the 19″ one. I don’t have a great picture of it, but you can kind of see it at the top right of the second photo below!

While we were off to a great start…. I hate to say it, but the blinds bothered me. Again, I don’t want any of my words to be perceived as negative because we were more than thankful to move into this house! But this house was the first we’ve ever had that has extreme privacy—no direct neighbors within view and also, the lot is bigger and the positioning of the house works in our favor. It also has a view we wanted to optimize! So in my eyes, that means no real need for blinds… and the existing blinds were old and dingy anyway. So I wanted to use woven shades to cover them. This is a good trick because we didn’t have to remove the blinds, then reinstall them at move-out. Instead, we just covered the blinds!

I mean… can you see how much better the left window looks? Positioning the woven shades all the way to the top of the curtain rod extends the look of the window. In other words, no one really knows that the window doesn’t extend much higher than it actually does. I cannot say enough good things about these shades. They are from Annie Selke and the quality is insane. Plus they were easy peasy to install—either inside the window trim or outside of it as we did. While the price definitely adds up, I can say that I did a lot of research and found the price of these to be about the same as the far less superior products I was able to find on Amazon. They are also available in white and a beige shade. 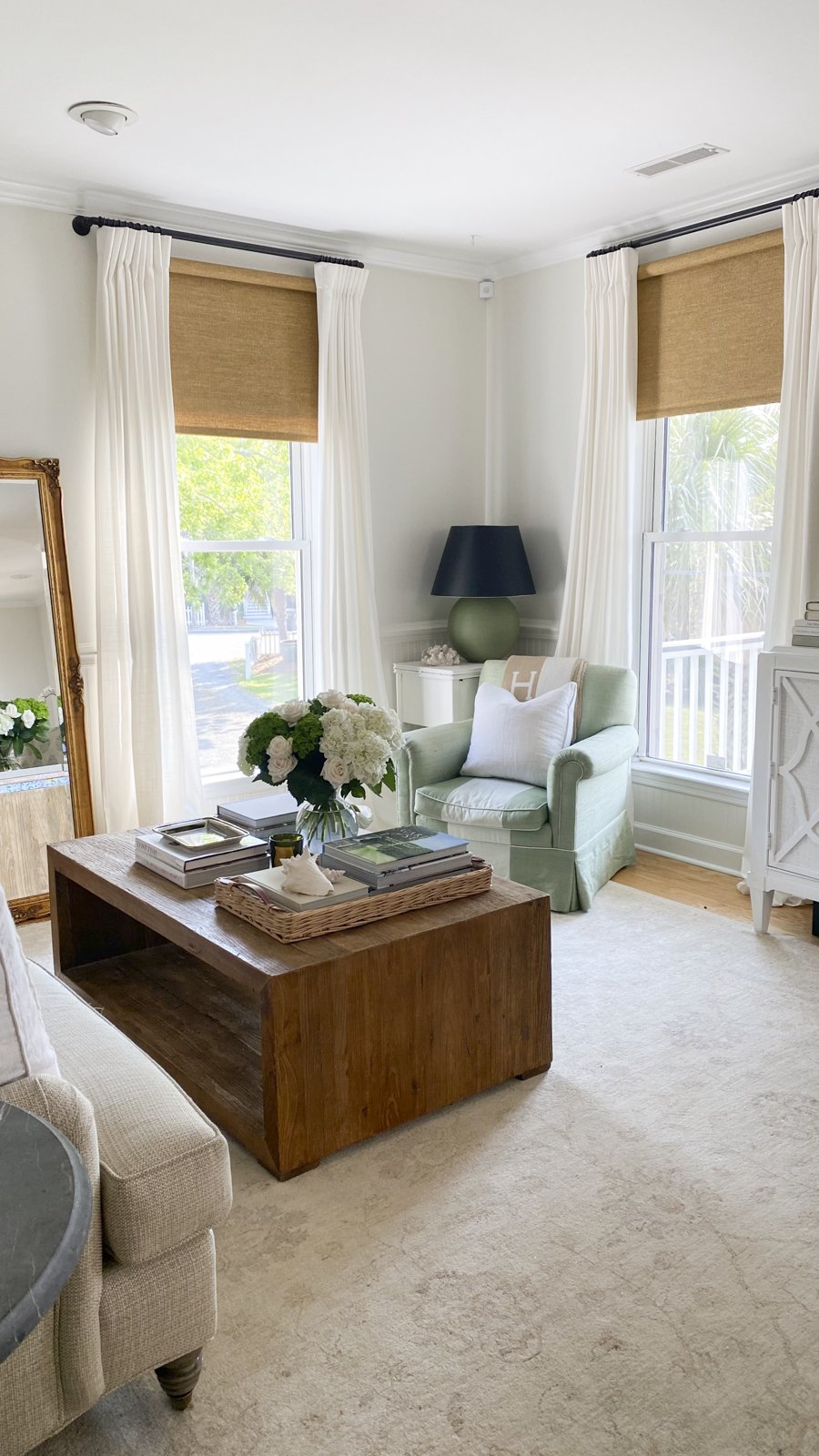 Since these pictures were taken, we added a little more artwork, but otherwise that’s it! 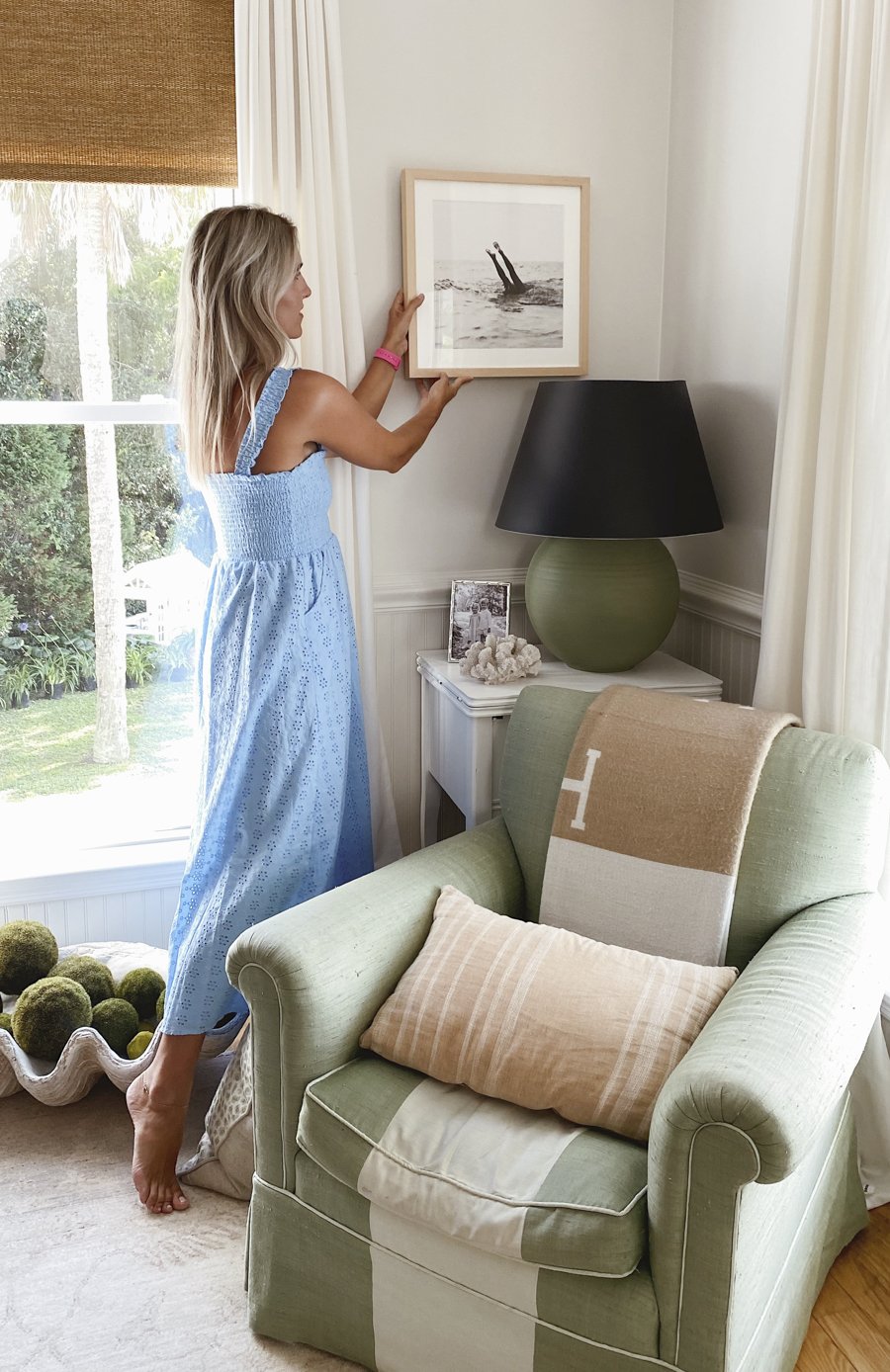 Let’s go to Rosie’s room next… Here’s how it was when we moved in. 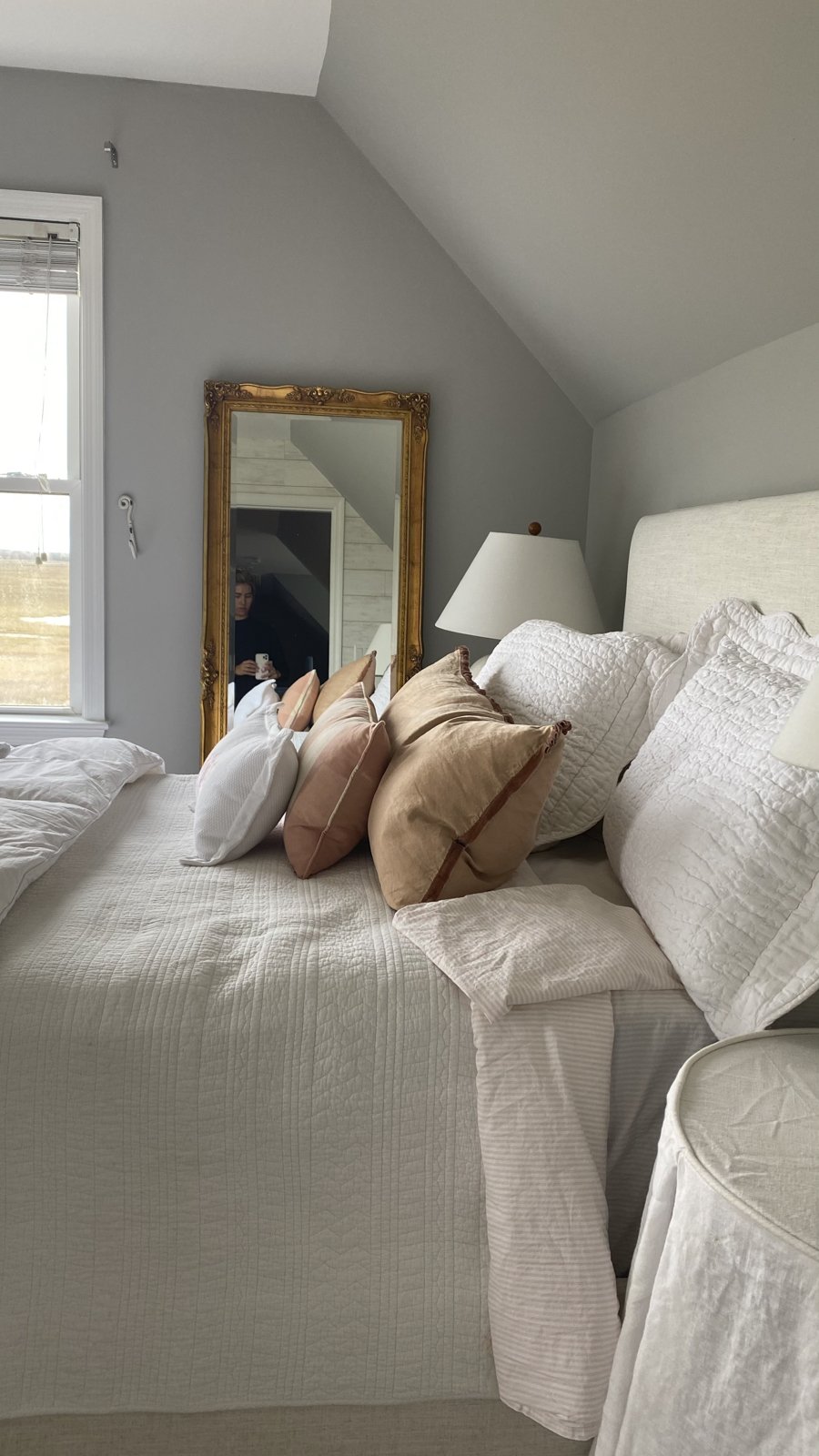 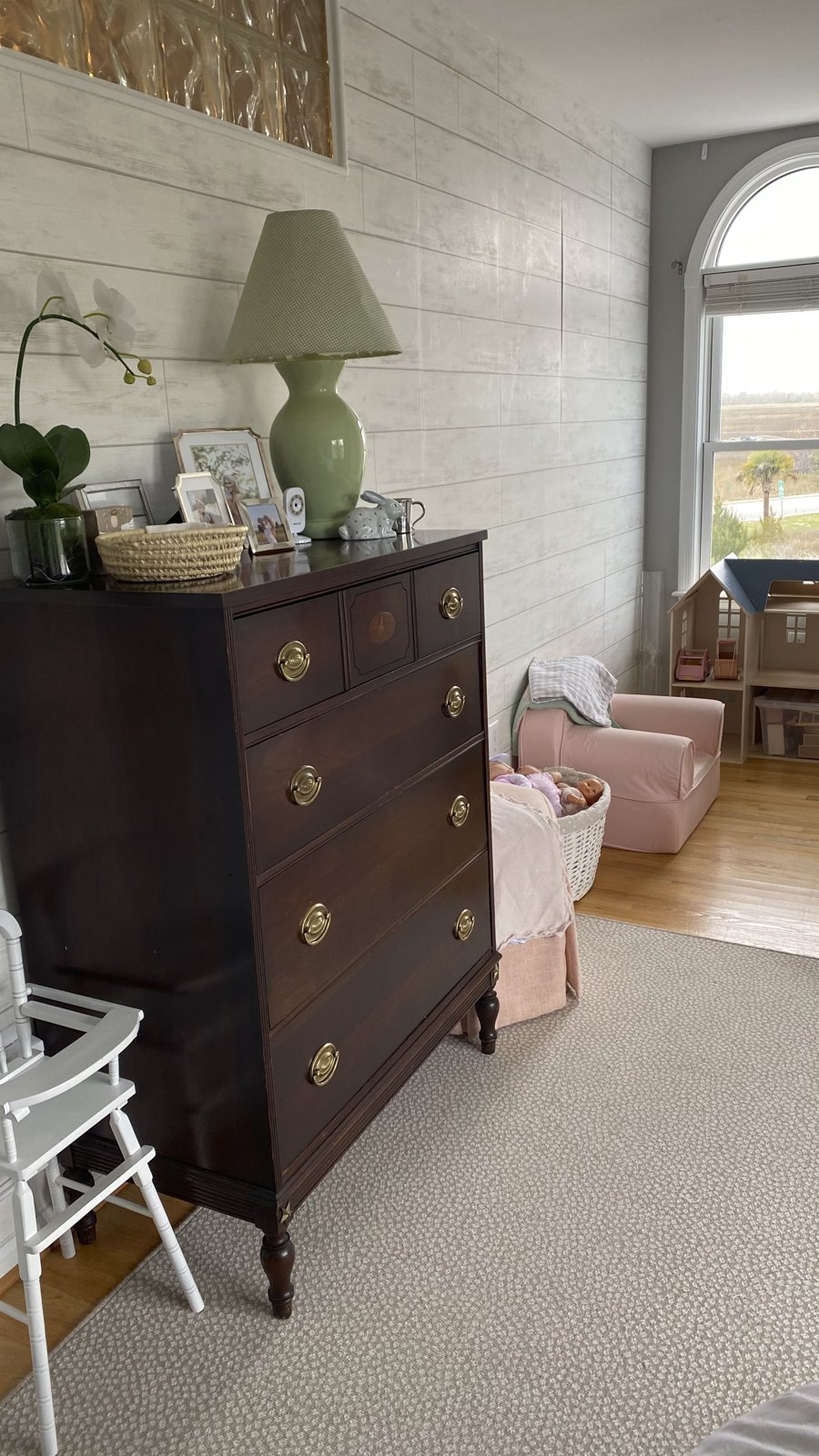 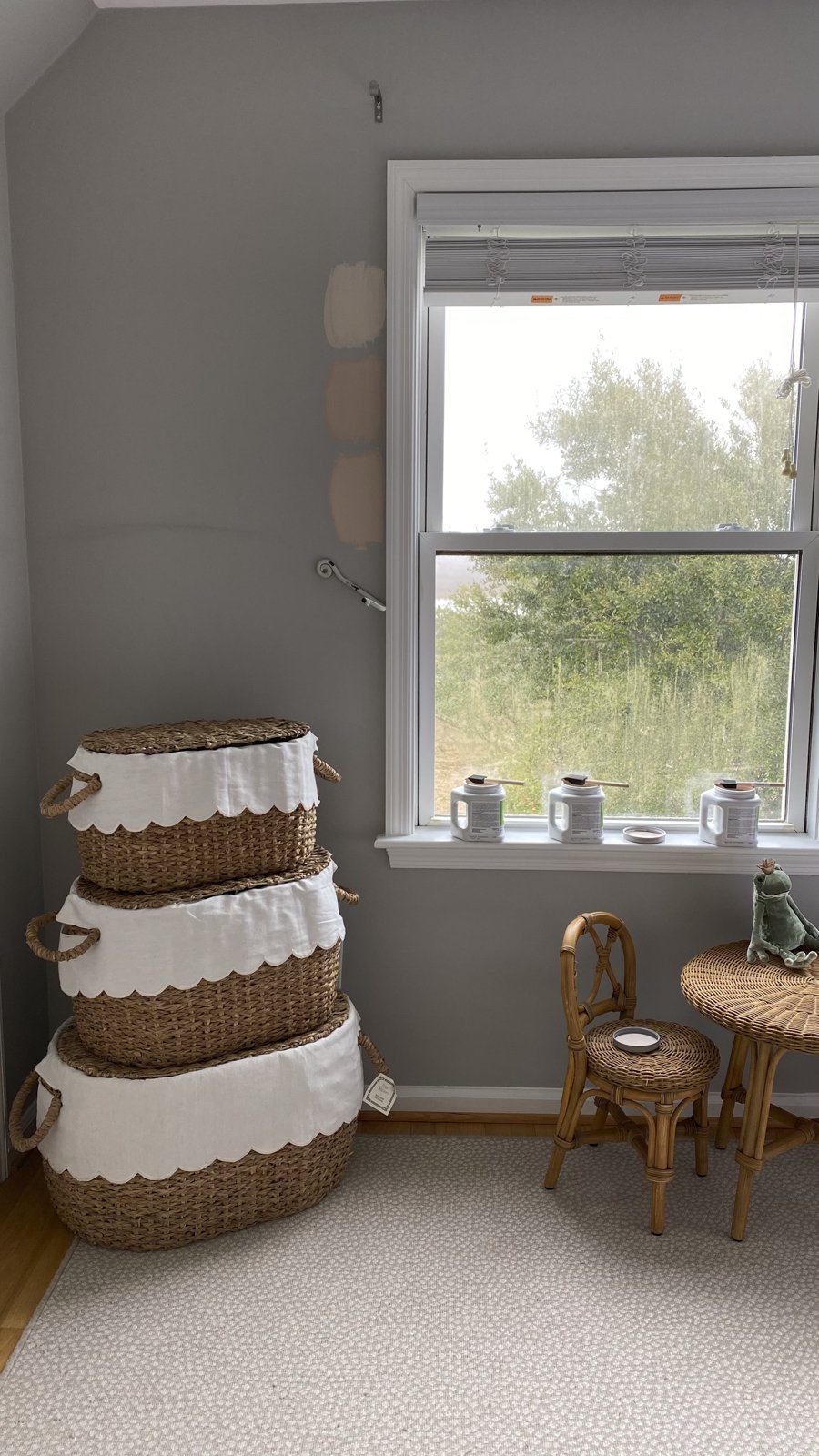 Honestly, Rosie’s room was the biggest project because it entailed wallpaper removal. I know I’m not offending anyone when I say this (I hope), because this house hasn’t been anyone’s primary residence in a long time… it’s just an investment property. But the wallpaper that was in here was in rough shape. It didn’t even reach one end of the wall to the other. It also was bubbling up and coming apart in areas. So we removed it! That was no simple task, though. Even with using every spray, solution, steamer, and potion we could find, we spent almost an entire day removing it ourselves, only to realize the sheetrock was damaged underneath. So we had to hire someone to redo the sheetrock on that entire wall. It was something! 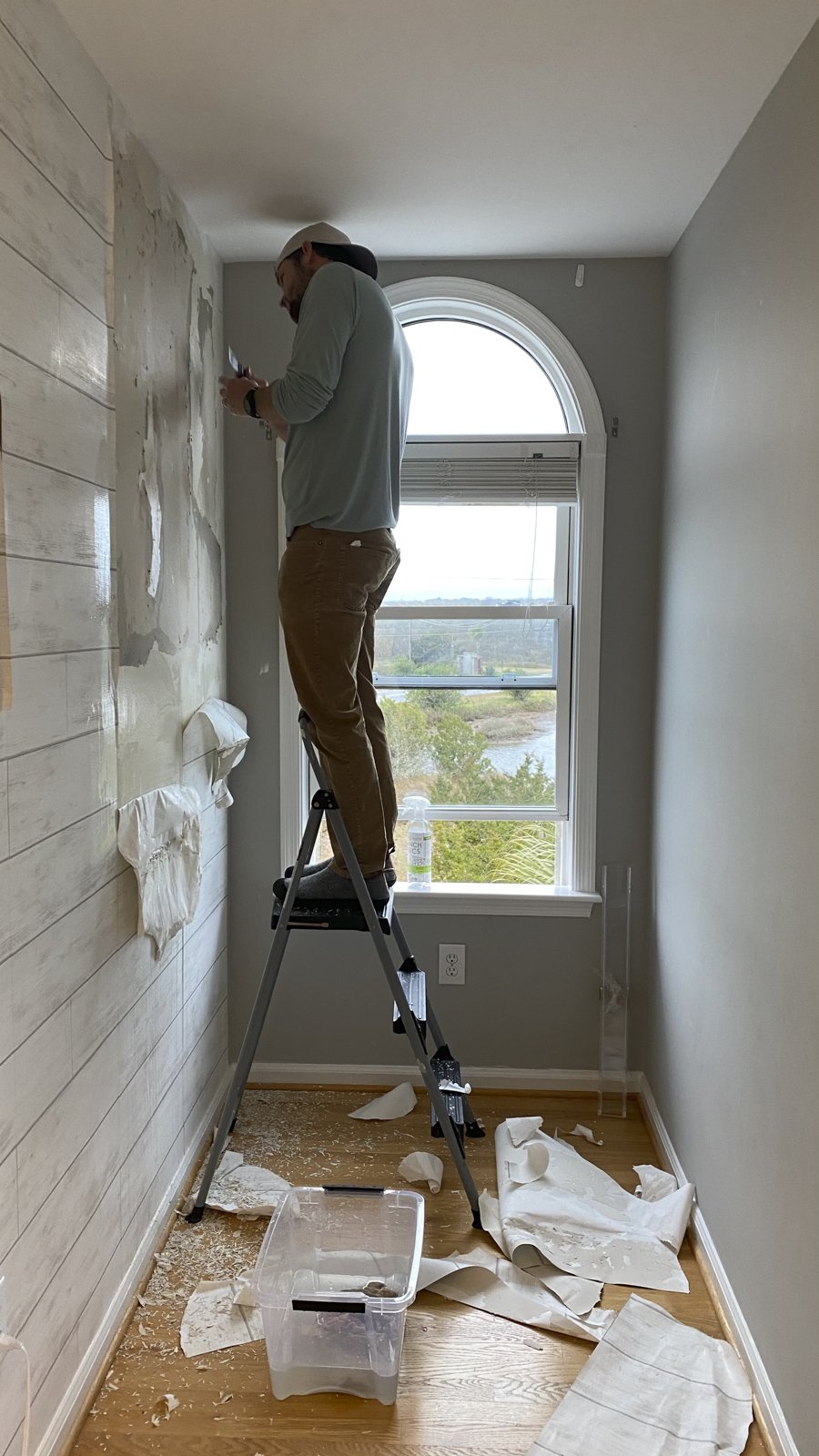 I wanted her room to feel ultra girly, but not “princessy,” so with permission, we painted it a warm, beigey pink called Sherwin Williams Classic Sand. Rosie’s rug, by the way, is by Annie Selke. It was in our dining room at our last house! 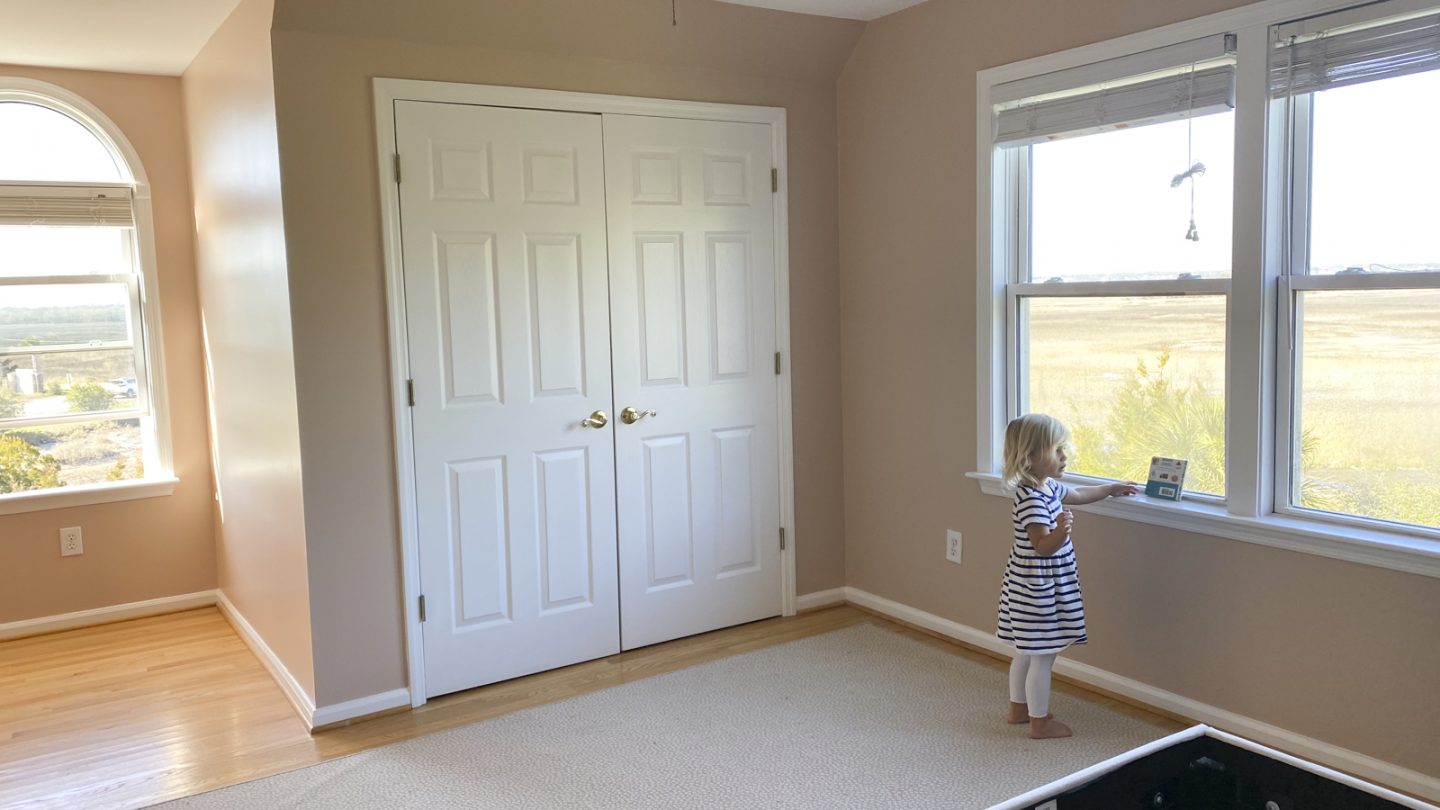 Then it was time for drapery. I used these curtain rods, these rings, and these Hannalill drapes from IKEA. The color of them is beautiful but the quality isn’t nearly as wonderful as the ones we did everywhere else in the house. But I didn’t mind one bit since this is temporary and honestly, who is going to come in her room and feel the drapes? Not a soul. 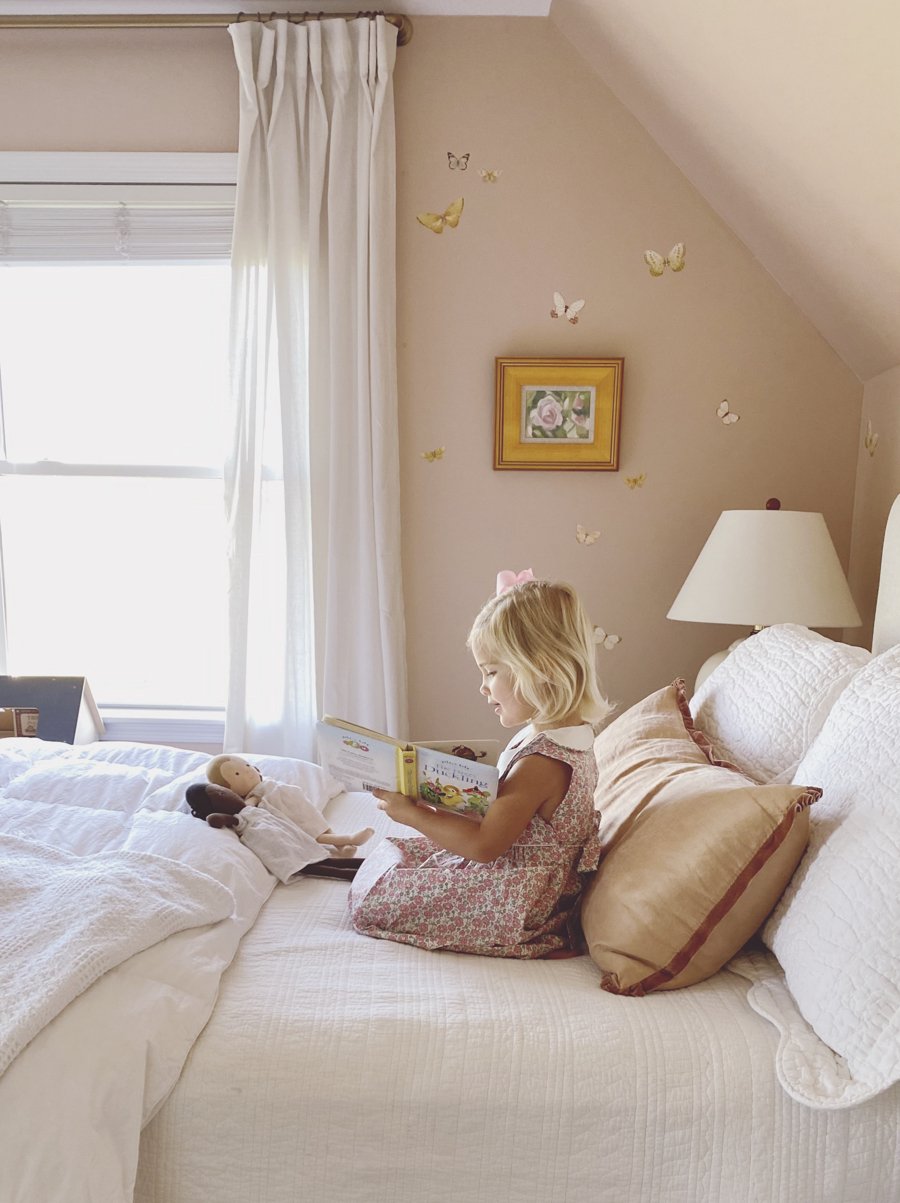 Once painted, we added these beautiful butterfly wallpaper stickers to her wall. I was really inspired by this room. Have to say… I love the way they turned out. The best part is that they are easily removable when we move out!

Then we added the same Annie Selke woven shades to her room! 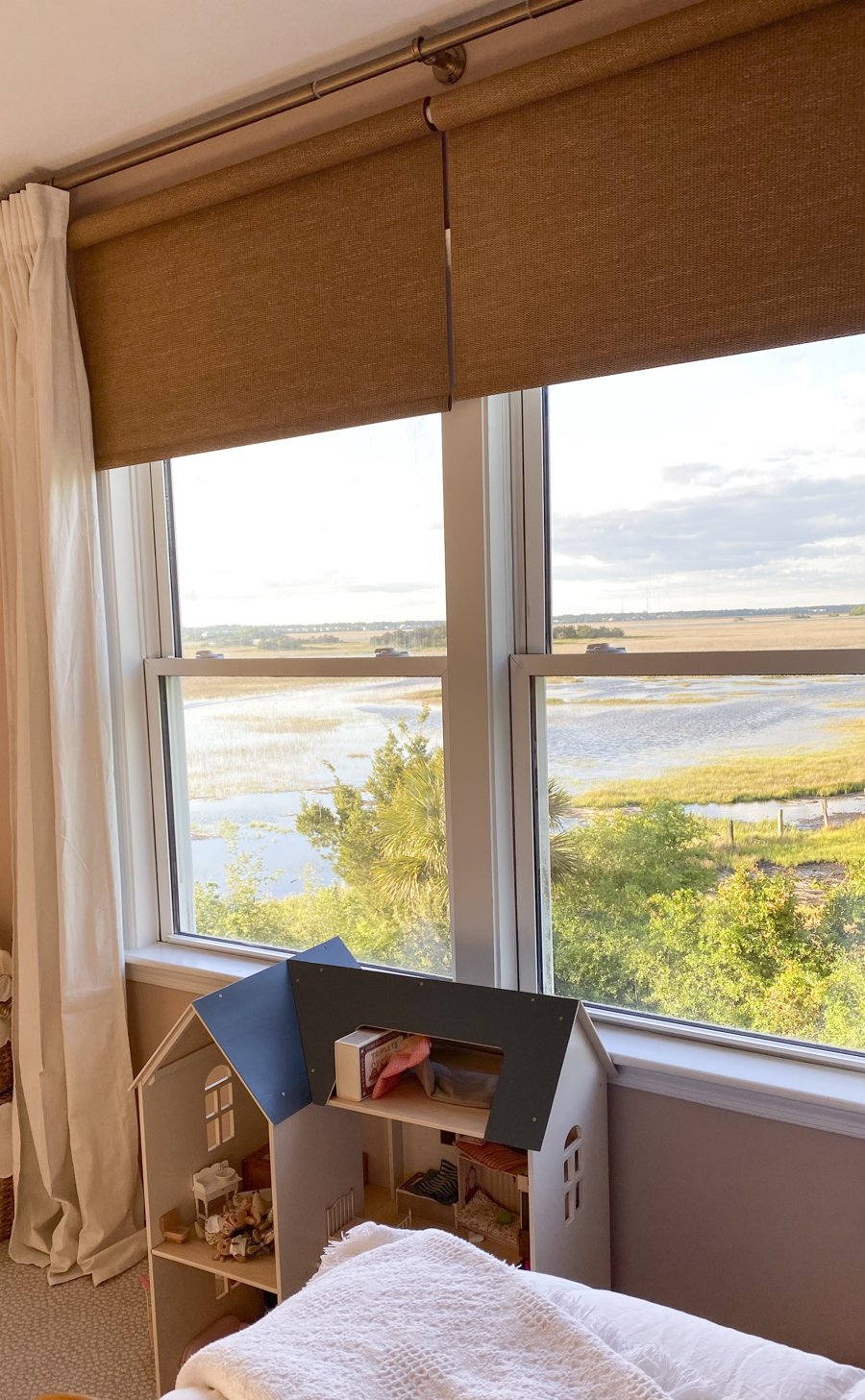 Next up? Watson’s room.

We actually left his room the gray color. It reads very blue, so it’s kind of perfect! Otherwise, much the same deal. We put these same Annie Selke woven shades in his room, along with the same curtain situation as we did in the main living areas.

While not the best photo comparison… here is at least a depiction of the difference the drapery and shades made!

Our bedroom pre-paint and window treatments: 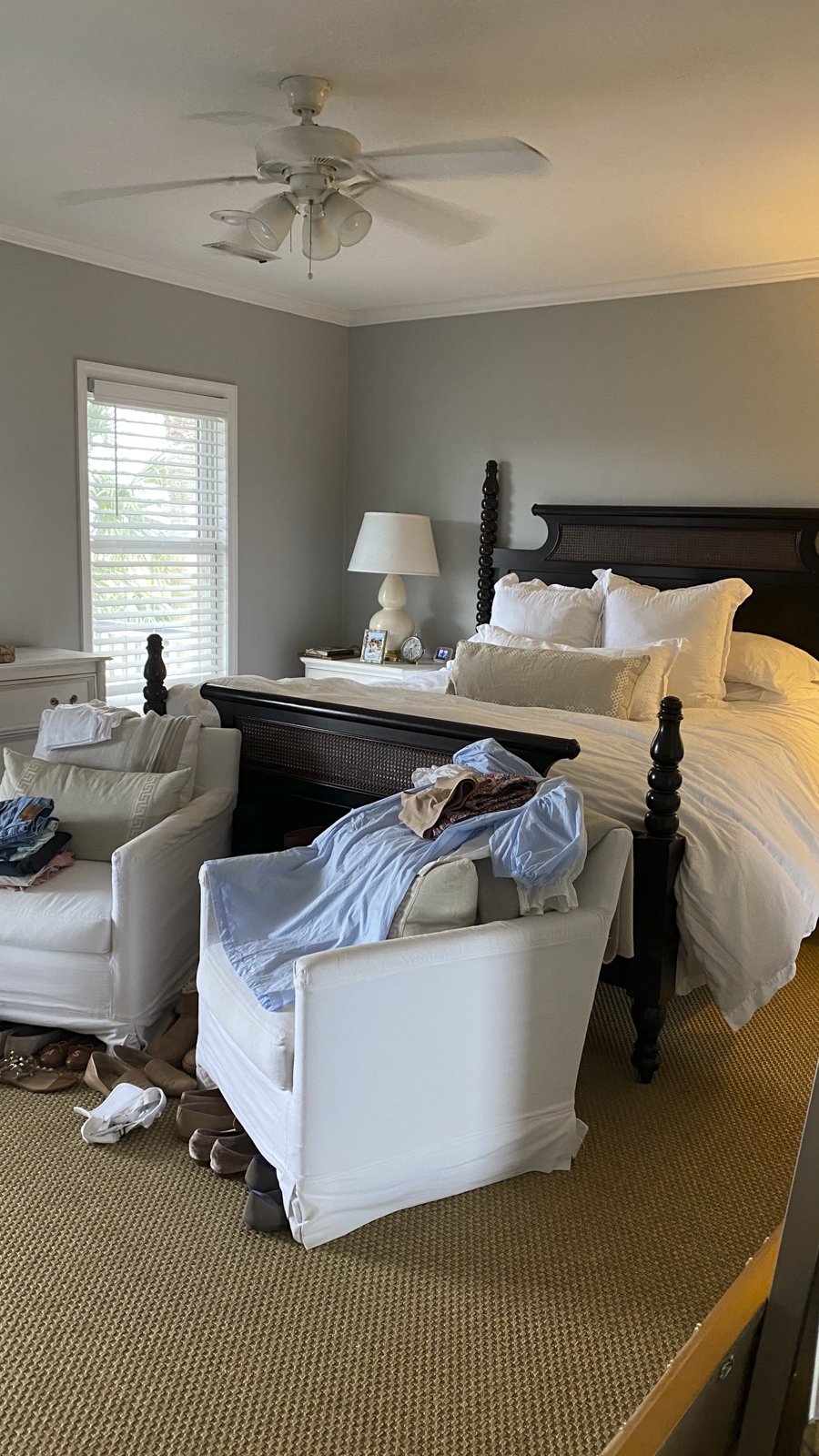 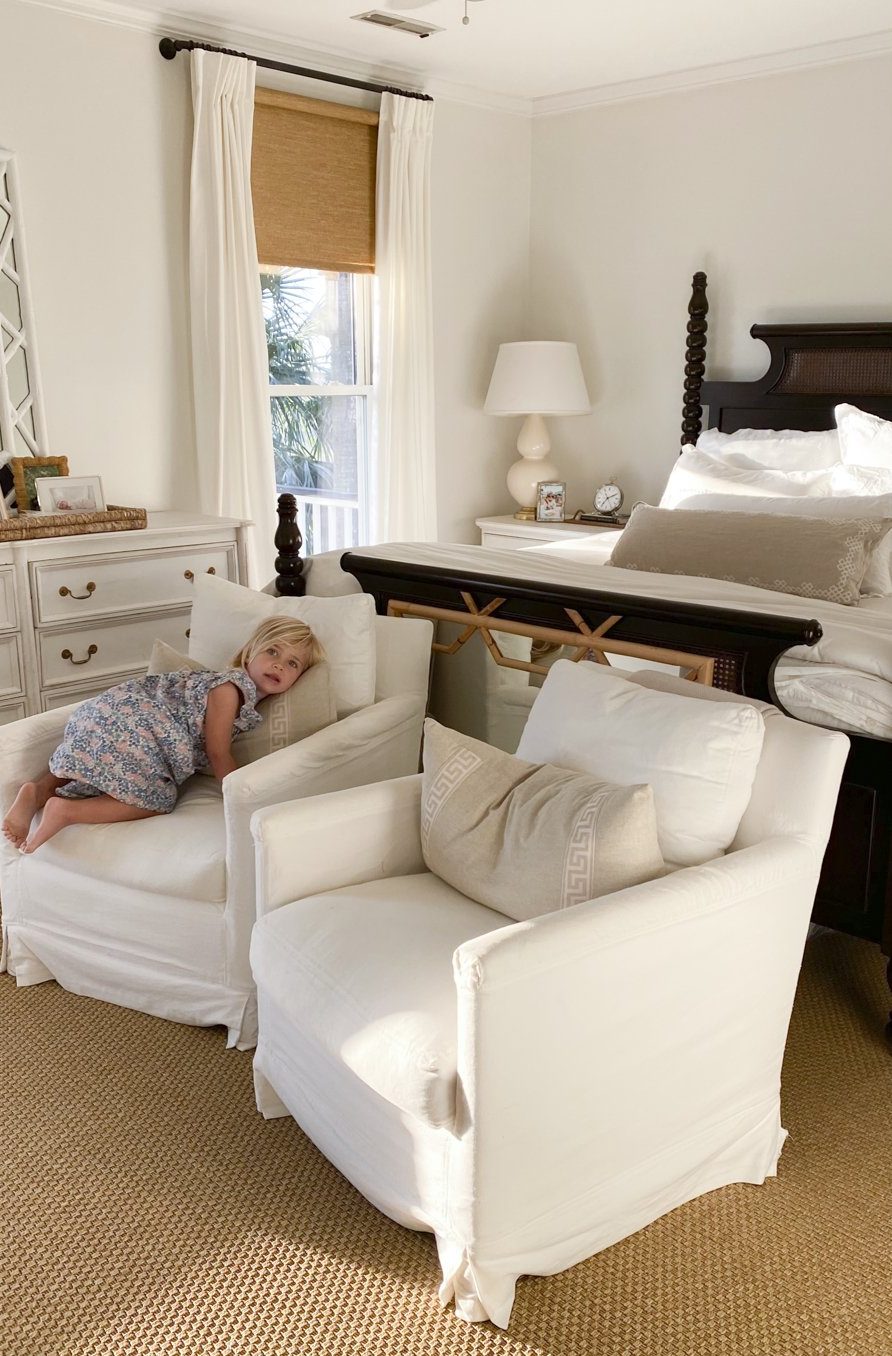 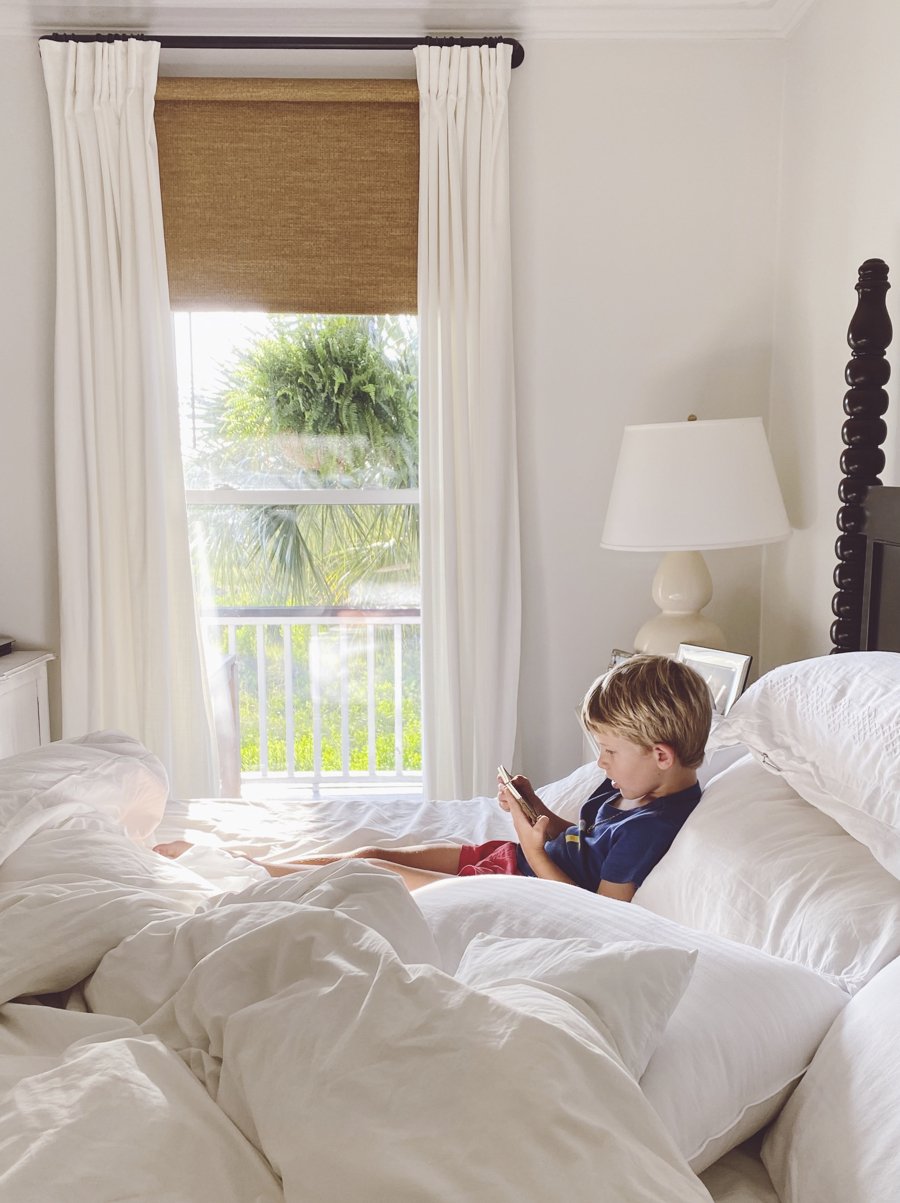 In the kitchen, all we did was replace the drawer pulls. I found these on Amazon and honestly, you cannot beat the price. The look is great, too! It’s a nice, soft tone of brass. With the gray and black specs in the countertops, the brass color really warmed up the entire kitchen. We actually did this same thing with every drawer and cabinet in the house, including bathrooms.

Now for the dining room. I just felt the hanging chandelier was a bit too heavy for such a small space, so I updated the dining area with this light. 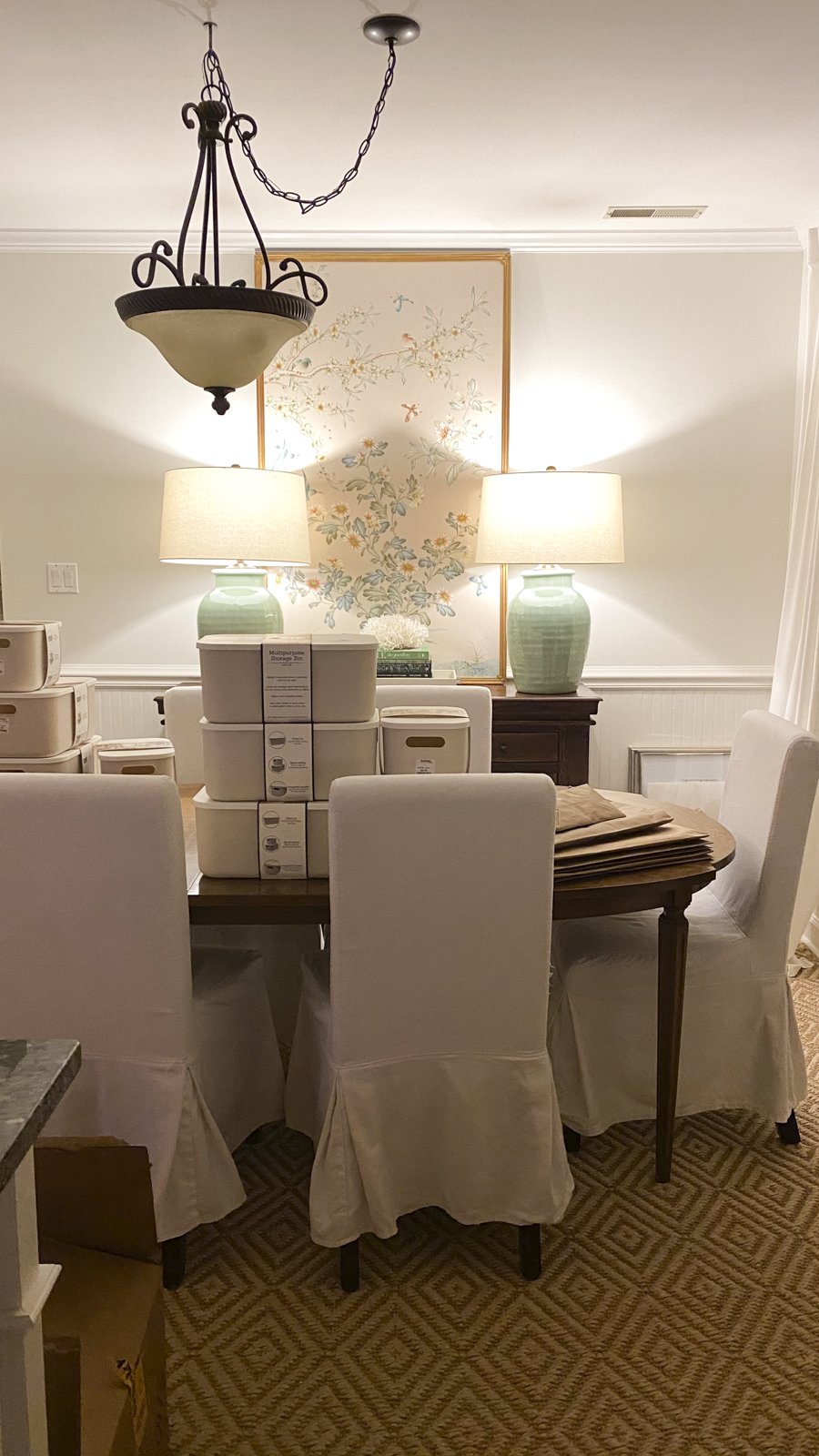 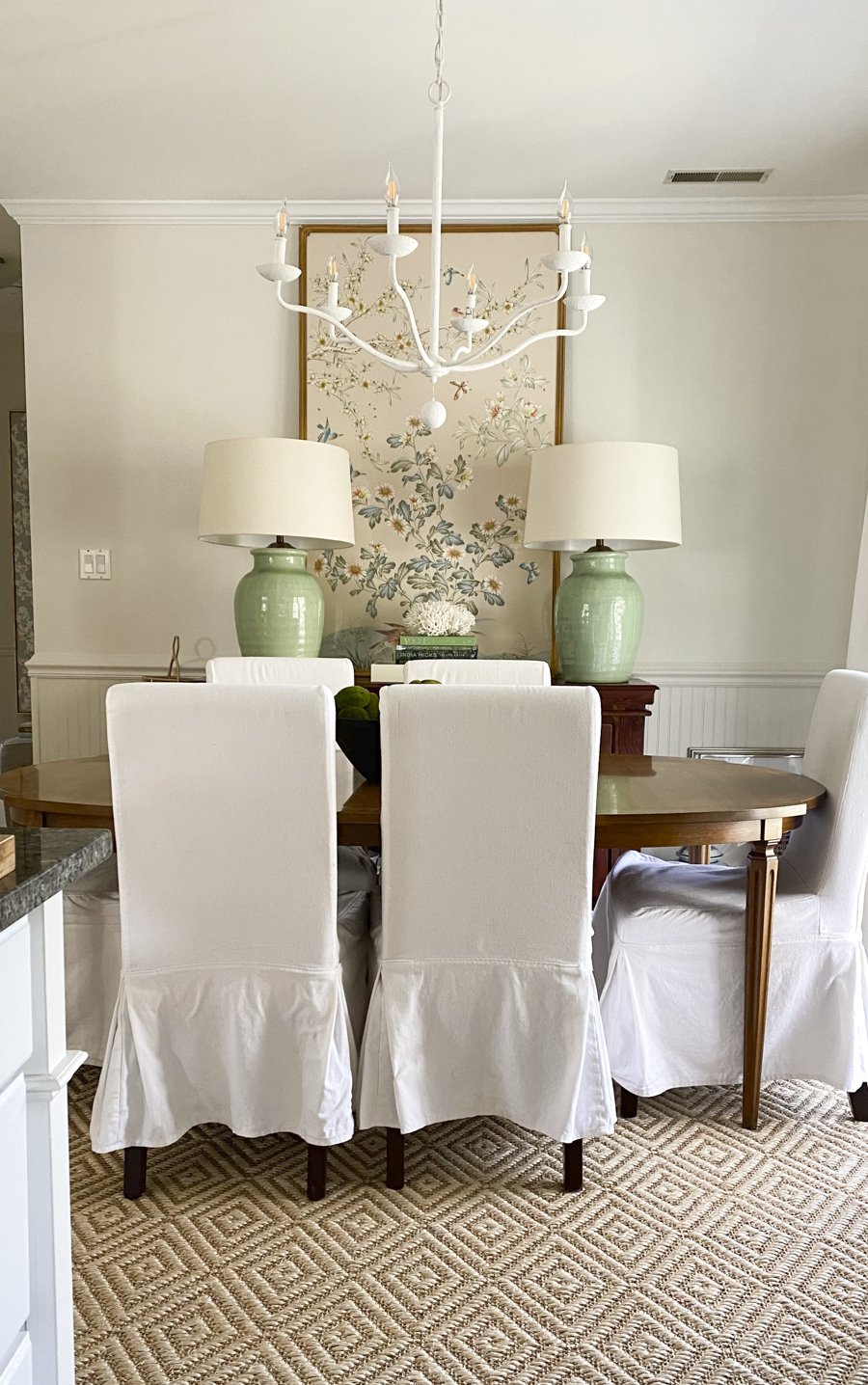 Maybe one day before we move out, I’ll get this house all picked up and photograph it with my nice camera, but I’m glad I have this post documented just in case that never happens!